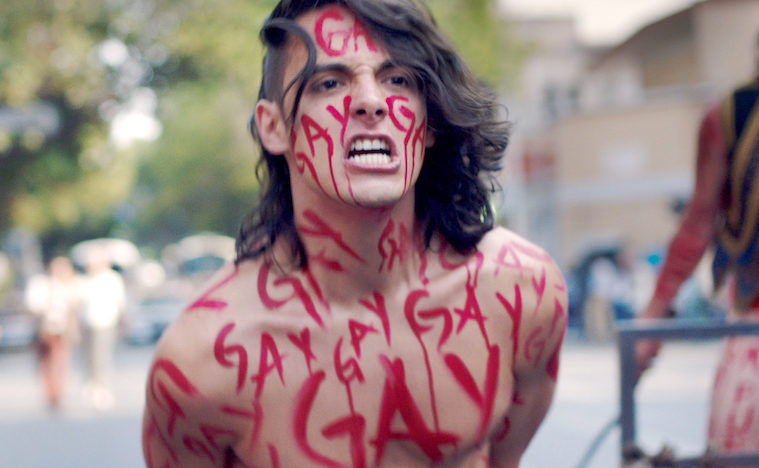 ‘This Is Not Berlin’ Director Hari Sama on Sexuality, Mexico’s Racism Epidemic, and the Film’s ‘Roma’ Connection

In the midst of Roma mania last awards season, a little film emerged at the Sundance Film Festival, also starring Marina de Tavira as a stalwart single mother: Hari Sama’s This Is Not Berlin. Led by newcomers Xabiani Ponce de León and José Antonio Toledano as Carlos and Gera, they play two high schoolers growing up in Mexico City. Bored with his high school’s machismo soccer culture, Carlos joins the small but radical queer and leftist community, participating in public displays of nudity to protest FIFA officials. Gera wants to join but his personality doesn’t click with the group, so the boys grow apart as they stumble through class exploration and settling on their identities. The surprising fate of Sama’s characters makes the viewer reconsider everything they’ve seen. What seems like a natural telos for Carlos and Gera is worth closer examination.

We sat down with Hari Sama at the 2019 Tribeca Film Festival and the interview is being published on the occasion of This Is Not Berlin’s debut at Outfest in Los Angeles. We discuss Sama’s own ambiguous sexuality, the conflicting class politics of Mexican punk and avant-garde scenes, Mexico’s own national racism epidemic, and Roma actress Marina de Tavira reaching international fame during This Is Not Berlin’s Sundance debut.

The Film Stage: Are you gay?

Hari Sama: Everybody thinks I am, so let me tell you that part of my story. I was very confused, and I was living in Europe in the ’80s, and I came back from Paris to Mexico City. I was a very depressed, very complicated kid, and I found this group of artists that took me as family. It’s them that you see in the movie; some of them are dead, but some of them are still alive. They had me like a part of the family. I felt so comfortable there and I had always felt uncomfortable in every group I had been in. I had no friends from high school, so that’s the group that took me, and I made a very big effort of trying to be gay without being gay. So I went through the opposite process, if you will. There was more of that in the original screenplay and then at some point it became less important, Carlos (Xabiani Ponce de León) trying to be gay to belong in the group. So that’s my story.

In the film, Carlos performs with his band at a punk show and it’s clear the punks are from lower classes and have traditional gender norms, whereas his art-electro band consists of rich kids who can afford to experiment with sexuality, drugs, etc.

That’s a reality with which we grow up in Mexico. It’s not that in the U.S. you don’t have a difference of class but in Mexico the difference in class is related to the color of skin as well… well, here too. There’s a very big difference between how the European Mexicans and the original Mexican people relate to each other, and of course in music that is expressed as well. I thought it was important to have that dialogue. I thought music has always been one of the only places where that could come together in a more natural way even though there is always a difference for both sides and it’s very painful. I think that’s one of the biggest scars in Mexico.

I thought it was interesting how the guy running the show says to Carlos’s band, “You’re the pretty ones” and he goes, “You’re pretty too” and they’re like, “No, we’re not like you.” He gets it. But Carlos and his friends were not aware of their own class.

Yes. I had a couple of friends living in New York City at that time and some of them are still here. I remember they once took me to a Mexican place for tortas, it was called Abella Cruz. and it was all very Mexican looking. We said, “Oh you’re Mexican? We’re Mexican as well” and they’d say, “Yes, but you’re well made.”

They’d been told that.

Of course, that’s the thing.

But to also internalize it and accept it…

It’s been internalized for 500 years, so it’s not something that is very easily changed. And that dialogue about racism in Mexico is a conversation that has just started, believe it or not. In Mexico we thought we were not racist, and Mexico is one of the most racist countries in the world. We didn’t even think we were racist. We didn’t understand how that works. The film is not about that, but it’s about identity and different things and I just thought this film takes place in Mexico so we need to talk about this. It’s important.

In the first protest we see, the group is pulling Nico (Mauro Sanchez Navarro) and they’re naked. I wasn’t entirely sure what was going on there?

They had the bosses from the FIFA and so forth, and they were just slowing everything down. That performance was Mauro’s idea, the actor who played Nico. We had the opportunity of a lot of artists giving us lectures about why they became artists and why they are so passionate about their art. Especially artists who are very radical in Mexico. Some of them went to the point of giving lectures on contemporary artists starting with Joseph Beuys in the 1950s, so the actors understood contemporary art. Why they are you using their bodies as an instrument for saying things, even if it puts you through pain or something like that. Mauro was not really related to art, but the whole purpose of that was that they became artists themselves. I told them, “After these lectures you guys need to come up with ideas about what would you do if you were an artist. What would you say?” Mauro, being gay, said, “I always wanted to write the names I was called on my body. Words said by my mother, by my Catholic school, by friends, by people on the street. I’ve been judged and I’ve been kicked around and hurt.” So his performance has to do with that, shouting out the names he’s been called. I came up with the idea of them doing the performance in front of the FIFA bosses and having the police get involved because it’s visually stronger.

American actors are prudes about male nudity. Was it easy to get your male actors to do these scenes?

There was doubts at the beginning, but believe it or not, that scene we were just talking about, that was the first scene we shot with the artists. It was important for me to do it that way. For the principal character Carlos, he didn’t want to do it. He was in the camper, the producers told me I needed to talk to him. I went to him and tried to explain why it was important to be a part of all this. We shot in a real street in Mexico and the film commission didn’t know what we were going to do, and then they’re naked there and people started arriving and that gave them a sense of power. I don’t know how to explain it. Suddenly they didn’t want to get the robes anymore, they just wanted to be like that on the street. You could see them become empowered. It was a very, very special moment.

Did your filming overlap with Roma’s?

I ask because Alfonso was tweeting about This Is Not Berlin during Sundance.

I think he was retweeting Marina. But no, I had no idea. They had been saying that Marina is the only [known] actress in the film, and I was like, “Oh, ok, whatever.” I didn’t know what the film was about and then she was nominated for an Oscar.

You play Carlos’s uncle Esteban. Was that a real person in your life?

It’s inspired by a real uncle. But my real uncle, he wasn’t that. I just got from him the music and maybe the drugs a little bit. I pretty much tried to portray a male figure that I did not have growing up that I would have loved to have. So I pretty much recreated my life and gave myself a male figure.

Why did you want to play that part?

I love acting, and it’s hard if other people give me parts in their films because I’m a director. It was just important to me to give me that. Carlos is me when I was younger, and I’m giving him what I would have wanted to have. So it’s almost a mystical experience, it’s almost a ritual, if you will, of transfiguration.

What was the inspiration for the freewheeling Aztec club in the film?

It’s a recreation of a very specific bar that I came in Mexico City called The Nine. But it also refers to an experience I had in New York City with my brother. I think I was 20 and my brother was 16 and we came here in the ’80s and miraculously enough we could club. We were both minors but we could get drinks. I looked older. It was such an incredible time in New York City. We ended up at four in the morning in this place called the Aztec Lounge around here, when SoHo and the East Village were a completely different place. This is completely gentrified. [Hari gestures to the Tribeca neighborhood outside]. That was real. It was in blacklight, and they had painted skulls on the wall that came alive with the blacklight and we were at this bar with all this dark, wonderful music. It’s a way of merging these two experiences in my life.

Was the New York club a sort of free-flowing, pansexual, artist place?

Yes. The Nine was a pansexual thing, I think in clubs in New York were too. Something that this movement, it wasn’t really a movement, but it was this gathering of people trying to do something. I think what attracted us, it became pansexual very quickly. It was good to be androgynous and paint yourself. It didn’t really matter if you were gay or not, but it was just about being open to everything.

This Is Not Berlin plays at Outfest in LA on July 24 and opens in limited release on August 23.