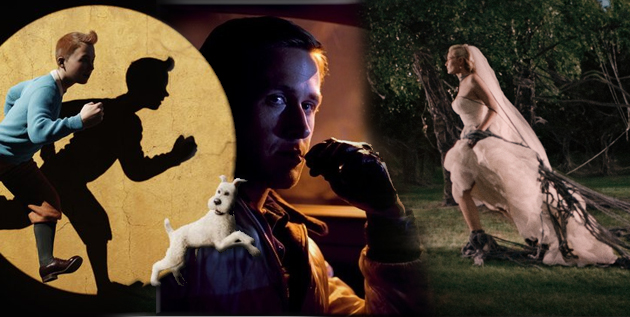 The first few moments of a film can be precious. Landing an ending is vital, but a great initial hook can set that perfect tone to invite us into the story. We’ve had some excellent openings this year and have rounded them up below, with some providing a pleasant montage to ease us in, while others can haunt or foreshadow what is to come. Check out our top ten and let us know your favorites. You can also see our Top 10 Endings of 2011 for the other side of things.

Much like how the film’s protagonist dabbles in life in the past, so does Woody Allen, harkening back to his visual love letter to New York in Manhattan and bringing it to Paris. From the shots of the urban landscape in inclement weather (New York in snow, Paris in rain) to trains slowly gliding by major works of architecture, and all the urbane urban life in between, Allen savors the Paris of the present to preserve it for the future. Oh, and did I mention it’s impossibly beautiful, too? – Mike Anton

9. The Adventures of Tintin (Steven Spielberg)

One of the biggest fears that any true Tintin had was that Steven Spielberg and Peter Jackson were not going to stay true to the spirit of Hergé. This notion is immediately dispelled in the first few minutes of the film after an homage laden opening credits charmlessly leads into a whirlwind 360 shot landing squarely on the creator himself. He’s drawing a portrait of the soon to be revealed titular character, as Tintin’s dog Milou (Snowy) mischievously smells something foul amiss. After a series of comical shots introducing a re-occurring pickpocket thief, Spielberg returns to Hergé who has drawn a picture of Tintin exactly as he is fondly remembered in the comics. After comparing the portrait with his new impressively realistic 3D look, Spielberg pays Hergé fans a little easter egg with a wall of character portraits straight from the inside of the books. – Raffi Asdourian We’ve all asked the question, “What would my funeral look like? Who would come? What would they say?” In his fantastic directorial debut, Richard Ayoade kicks off by introducing the dry, hilarious tone to follow, as our precocious lead imagines what would happen if he died and what his parents would think. Ayoade also establishes the voiceover running throughout the film and the mix of styles, including the Super 8mm footage.  – Jordan Raup

Storytelling at its finest. Under a beautiful score, courtesy of Michael Giacchino, director J.J. Abrams offers a jib shot of a factory, and sign with its numbers being taken down. The text on the sign reads: “Days Since Last Accident.” Back to zero the sign goes, and we know that someone has died. The next scene brings to a funeral reception, the judgmental whispers of relatives and friends, and finally a boy without his mother. – Dan Mecca

Fade in to a woman water-skiing with a big smile on her face. It’s this moment of ecstasy that haunts the rest of Alexander Payne‘s superb dramedy. Just as we watch this woman at the height of her life – seeking thrills in the big blue wide open – we soon see her trapped in a coma, waiting to die. Not unlike the characters in the film, we must move past the memory of this woman living her life to the fullest, and accept what’s happened to her. – Dan Mecca

Smashing in on a car filled with thugs racing down the Irish countryside with N.E.R.D.‘s Rock Star blaring in the background, we then cut to the calm and collected Sergeant Gerry Boyle (Brendan Gleeson), who nonchalantly decides to give it a go and investigate. He uncovers the crashed car with bodies strewn about and in one’s pocket there is some drugs. He throws them away, except for one hit of acid, which he takes as he enjoys the sea in front of him and writer/director John Michael McDonagh tells us everything we need to know in one of the best character introductions of the year. – Jordan Raup

No matter what you think of Kelly Reichardt’s anti-western, one can’t argue that she never gives the audience some erroneous idea about what she wants to do. And, concurrently, the opening scene allows viewers to a) settle in for a rocky ride on the Oregon Trail (the film’s working title), or b) run out of the theater in a panic. It’s entirely emblematic of what’s to follow: stark, slow, wordless, difficult, brilliant. – Nick Newman

Establishing a character as complex as Brandon Sullivan (Michael Fassbender), a successful New Yorker who struggles with sex addiction, is no easy task. Yet somehow, in this single opening sequence, we get a full, dynamic accounting of his personality. He begins sprawled out in bed, barely able to move, gazing up the ceiling with listless, joyless eyes. Then, he begins his morning routine, culminating in his subway ride to work. Here, we cross-cut between his commute spent making eyes at an attractive stranger, and his nights spent with random, meaningless women, and his private unaddressed purgatory of waking constantly alone. All in one sequence we understand Brandon’s impulses, his boundaries, and his tenuous sense of control. Add to this the superb score and the impartial gaze of the camera, and you have a virtuoso sequence of intense power. – Brian Roan

Call it the best short of the year, if you’d like. Starting with a small room, Ryan Gosling’s nasally voice, and hints of the Los Angeles landscape right outside the window, it soon evolves into a little crime story about two idiots robbing a building and the man getting them out of trouble. As things get worse, Driver almost loses his cool – almost – but he pulls off an escape that, on paper, seems impossible, but is perfectly orchestrated onscreen. The patient gaze of Nicolas Winding Refn and tight editing by Mat Newman coalesce with The Chromatics’ Tick of the Clock to create a real nail-biter. – Nick Newman