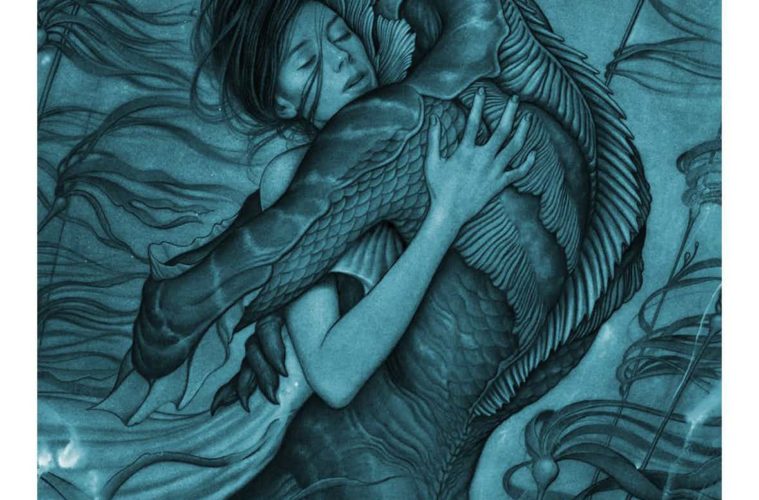 It is not outside the realm of fair judgment to suggest that Guillermo del Toro has been a little off the boil in recent years. Over-scheduling can do that, even to the best of us, but The Shape of Water, an unconventional love story — with a generous dash of the supernatural — set in a dreamy 1950s United States and featuring knockout performances from Michael Shannon and Sally Hawkins, does represent a clear return to form. This is bolstered to no small degree by the fact that it is, in essence, a fairytale and the singular Mexican director — along with his physically-gifted performer Doug Jones — has always been at his most punky and creatively audacious when working in the confines (or lack thereof) of that particular genre. As his enchanting, imaginative latest film proves, it’s great to have him back.

Hawkins plays Eliza Esposito (a name with significant weight given the time period), a mute woman who lives in a dreamy apartment above a glitzy but somehow empty cinema called the Orpheum while working as a cleaner in a top-secret government research center. She likes to eat boiled eggs, masturbate, watch Golden Age movies, and stare longingly out of train windows. Needless to say, we like her immediately. We learn everything we need to know about her — and pretty much everyone else in the film — in a fluid and brilliantly economical opening sequence; all sharp cuts, distinctive foley work, and teasing wind instruments courtesy of Alexandre Desplat. It’s an opening movement for the composer which is reminiscent of — if significantly more lighthearted than — his introduction for Jonathan Glazer’s Birth, another film that used music to lure one into its most mysterious pockets.

Richard Jenkins plays her neighbor Giles, a struggling artist who pays the bills by painting product advertisements while pining after the guy who works in the local pie shop; her coworker Zelda (Octavia Spencer, bubbling with defiance and happy to do all the talking); a scientist named Hoffstetler (Michael Stuhlbarg), who overlooks the center’s latest top-secret project (the subject of which also happens to be the subject of Eliza’s affections: a scaly, open-faced version of the creature from the black lagoon, given humanity by Doug Jones); and a cruel misogynistic military stooge named Stickland.

That last role is played with great menace by Michael Shannon, an actor who is, admittedly, at home to such material having spent five seasons as Nelson Van Alden in Boardwalk Empire. However, Strickland has none of that character’s dormant empathy and far more of his repressed emotion and anger. The frankly terrifying, contorted facial expression Shannon makes when Strickland’s son asks him whether there’ll be jetpacks in the future — a comment he apparently takes as an affront to the sort of North American endeavor that inspires him — is a masterstroke all its own. Indeed, it’s a performance to top, but Hawkins is up to the task as an actress who can, with little more than a knowing smile, remind us that charlatans should not be taken heed of and life should be enjoyed. As Eliza she earns that unique kind of warmth we reserve for those souls courageous enough to forget any afflictions they may have when faced with bullies or an unjust establishment.

Hawkins’ Eliza is the defiant winter flower to Strickland’s engulfing blizzard and her openness to embracing her desires seems to make every inch of the troubled man’s Eisenhower-era consumerist dream life seem all the more hollow. Having grown up south of the border, del Toro’s skepticism of that dream makes it all the more potent.

The filmmaker has not managed to reach such artistic heights or execute such magical flourishes since Pan’s Labyrinth over a decade ago, so it’s a real shame that The Shape of Water becomes a little formulaic after the first act. With the help of Zelda, Eliza breaks her new friend out of the facility and falls in love. Giles regains some of his confidence. Strickland’s frustrations grow. Story has arguably never been the director’s greatest strength and, with those pieces in place, you might already know where this one’s headed. However, as the title hints at, The Shape of Water is not to be dissected but to be immersed in. Indeed, in order to enjoy the myriad pleasures of del Toro’s world — with all its counterpointed humor, quicksilver pacing, endearing humanity, peculiar eroticism, and sudden eruptions of violence — one must simply take the plunge.

There have been a number of filmmakers over the years (Lynch springs to mind) that have shown audiences that dreams and nightmares are only separated by the finest of lines, but only Del Toro appears to have the ability to skip along that knife edge and, when he is truly at his very best, turn that skip into a dance.

The Shape of Water premiered at Venice Film Festival and opens on December 8.