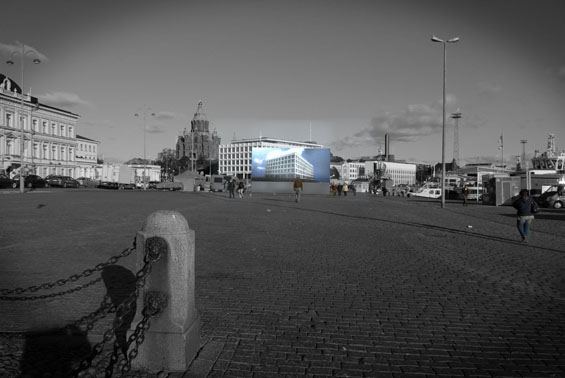 Superflex, a group of Danish artists, have created a 240-hour film titled Modern Times Forever (Stora Enso Building, Helsinki) and will screen it in Helsinki for the festival IHME Project 2011. The film shows “ravages of time marking a box-like office block, Helsinki’s Stora Enso building,” and they are in fact projecting the film on that same building. In the film, “centuries of decay are apparently compressed into the span” of the 10-day runtime. Check out an extended “synopsis” below. Apart from being present in our everyday lives, quietly changing for ten days, the film’s time races ahead at an estimated several-hundred-year gallop each day. The film is a fiction about what could happen to the Stora Enso building as an architectural and ideological symbol, over the next few thousands of years, if the days of humankind come to an end, and only time and the weather affect the building.

Sounds riveting. One will only have a single chance to see it, and if you are planning on buying plane tickets, you may be too late as the screening begins 1800 GMT. Then again, if you get there within the next ten days you can still take part. But be warned if you head to the bathroom. It is reported “there is a chance that you might miss a very important point but if you gotta go, you gotta go.”

Besides the theatrical films mentioned at the top of the post, most of the “longest films ever” are experimental ones like these. The previous record holder was Gérard Courant‘s Cinématon, which clocked in at 9300 min or 155 hours, 6 days, and 11 hours). It took 33 years to compile.

How much of the film could you sit through? Is this achievement that should be battled for?