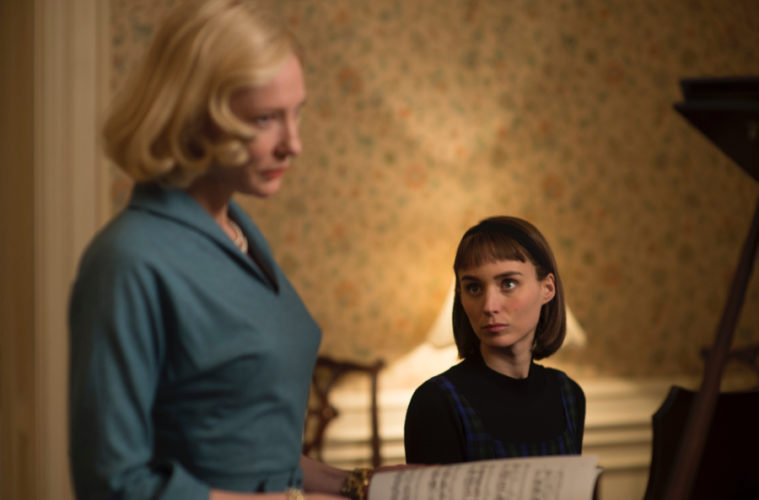 The Films of Todd Haynes: Performance, Desire, and Identity

Returning to the big screen after nearly a decade, queer maestro Todd Haynes presents his film Carol, based on the novel by Patricia Highsmith, a rapturous love story between Cate Blanchett and Rooney Mara. In honor of the release, the Film Society at Lincoln Center has assembled a retrospective called “Todd Haynes: The Other Side of Dreams,” and, for our own appreciation, we’re taking a look back at his films.

Through glances, touches, performances, cleaning, singing, organizing, cooking, and sex, Todd Haynes has established himself as one of the most inventive filmmakers, and perhaps the most daringly unapologetic when it comes to broaching topics of identity, femininity, queerness, love, and desire. But his work is also imbued with passion and sensitivity, and he’s as invested in characters’ interior lives as he is playing intellectual games with the audience. Join us as we take a walk through his filmography.

When asked by Nick Davis where one should begin with Todd Haynes’s filmography, the director settled on his first film, a biopic made with Barbie dolls. He said, “[I]n some crazy way it encompasses all those elements in my very first outing. It deals with questions about narrative, the subject, and identity, together with a take on pop culture in a particular historical framework.” True, Haynes’s first feature, which is technically banned from being exhibited in most venues (though MoMA has an original copy, it’s easily trackable on YouTube, and Lincoln Center just screened it) after a legal battle with the Carpenter family, is able to distill the most essential of Haynes’s pet preoccupations in a concise, yet daring manner. The story of the rise and fall of the eponymous pop star presents identity in the most manufactured way possible: as a doll to be played with, manipulated, and shaped the way society sees fit.

It wasn’t until 1991 that Haynes burst onto the scene with the equally audacious cinematic triptych Poison. Through three stories — “Hero,” “Horror,” and “Homo,” each with distinctive aesthetics and approaches — Haynes deconstructed queerness as social construct: documentary-interviewing not the person but the environment; horror film that studies the stigma of queer identity and AIDS; prison melodrama that examines the performative nature of relationships. With other directors (e.g. Gregg Araki and Derek Jarman), Haynes would be a part of an incendiary movement in film history: the New Queer Cinema, a term coined by critic and scholar B. Ruby Rich in a 1992 issue of Sight & Sound. Not only does the set of three shorts allow the director to play his semiotics game (he has a degree from Brown), but it also served as an opportunity for Haynes to play in genre.

Although the “Horror” segment of Poison is more easily identifiable as a conventional, well, horror film — especially for playing up the kitsch of low-budget B-movies from the 1950s — [Safe] might be his horror masterpiece. His tale of a 1980s housewife who becomes allergic to her suburban world is chilling in its articulation of anxiety and alienation, one that is at once universal and capitalizes on specificity. Though there are no out queer characters in the film, Haynes’s use of the housewife archetype, Carol (Julianne Moore), lets him mine gay culture to present a form of estrangement that feels especially potent for queer people. While its coldness and austerity lends an Antonioni-esque and Kubrickian feel, the brand of dread and isolation (identity as social construct) belongs only to Mr. Haynes.

Location is very much embedded into the text of Haynes’s films. In Velvet Goldmine, the relationship between London and New York seems especially present in the way those cultures navigate their own forms of identity via music and media. Also crucial to Haynes’s glam rock-extravaganza is performance: though he had explored performative identity to some degree in all of his previous work, its explicitness as a form of constructed persona perhaps reaches a kind of apex here and in I’m Not There. Utilizing a Citizen Kane-like narrative structure, the films bobs in and about the transformation of music, art, and the self in lustrous and flamboyant fashion. It’s Haynes’s most joyously bonkers film, even rhapsodic in many ways. Velvet Goldmine, at its essence, is “Bohemian Rhapsody” as cinematic event.

Loosely based on Douglas Sirk’s All That Heaven Allows and Imitation of Life, the most interesting aspect about Far From Heaven is how it, at crucial moments, sets intellectualism aside in favor of raw emotion. Being capable of as much critique and subversion as the man by whom he was inspired, Haynes places the focal point on the interpersonal relationships and interior lives of his characters: a miserable housewife (Julianne Moore), a closeted husband (Dennis Quaid), and the black gardener (Dennis Haysbert). Mise-en-scène is more than semiotic fodder; it’s also reflective of emotional dynamics. This is a ravishing weepie that’s brushed with sincerity.

Perhaps amongst the best biopics ever made, Haynes’s film about the myth of Bob Dylan deconstructs the genre into six characters, six styles, and six actors. They’re pieces to be broken and reassembled in a myriad of ways, distinctive and self-contained, yet inextricable from the whole. Richard Gere, Cate Blanchett, Ben Whishaw, Christian Bale, Heath Ledger, and Marcus Carl Franklin play various facets of Dylan that are organized by period, mood, and emotion. I’m Not There is, along with Superstar, probably his most overtly intellectual work, and that doesn’t deter from how winsome, how fascinating this character study (or study of characters) is.

Haynes’s five-hour film (which was produced as a miniseries for HBO) adapts the novel by James M. Cain, pulls from Alan Pakula and photographer Saul Leiter, and is his most perfect work. Elegantly combining all of his interests and fascinations, stylistic embellishments, and aesthetic proclivities, Mildred Pierce is a rapturous dramatic feat led by performances by Kate Winslet, Guy Pearce, Morgan Turner, and Evan Rachel Wood. The throughline to almost every one of his films is the relationship between desire and identity, and it manifests here between Mildred and her daughter Veda. Both seeking solace and independence, and yet drawn to one another out of love, protection, and spite, the games they play with one another (literally and figuratively) accentuate a tension that’s addictive to watch.

If one of the unifying themes of Todd Hayes’s work is gazing, then Carol is his magnum opus, a film that luxuriates in looks, glimpses, and passing glances. From [Safe] to Mildred Pierce, the looks that his performers give (especially his astonishing actresses) have been penetrating beyond belief, able to pass through the screen and into the heart of the viewer. They’ve articulated different things about desire, and Carol — the love story between an older socialite (Cate Blanchett) and a young shop girl (Rooney Mara) — is the culmination of the complexities of looking. As Bryan Lowder writes, “If one wanted to reduced the queer experience to its most basic and universal components, the profound necessity of looking – for each other in a sea of straightness and for signs of hostility in that same mass – would have to be high on the list. Queer people are forced to become experts at looking…” The rapturous eyes of Blanchett and Mara dart around one another, looking for flaws, looking for solace, and the headiness of Haynes’s style melts away in favor of overwhelming adoration, intoxication, and a revelry in eroticism.