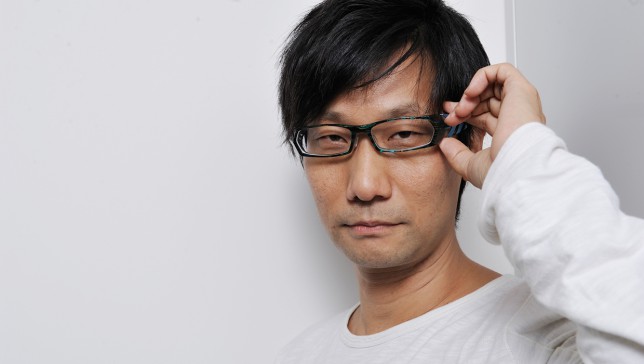 Excepting those occasional forays filmmakers might make into the realm, no video-game director has as much of a cinematic influence as Hideo Kojima, creator of the brilliant, maddening Metal Gear Solid series. The most obvious touchstone, that one you can know without having ever lifted a controller, is right in the name of his iconic hero, Snake Plissken; the most expansive example would have to be Snake Eater, a Bond-homaging espionage tale that features the best theme song 007 never got; and the most frequent reminder is his own Twitter account, which is as much about his film-viewing habits as the making of an international phenomenon.

With the series’ latest installment, Metal Gear Solid V: The Phantom Pain, today hitting stores and leading many to call in sick, now’s a good time to look at the auteur’s favorite films. If you’ve played even one of his games for just a short period, certain selections that he once provided a Japanese book, Metal Gear Naked, will be of no surprise — listed as those that “played a part in shaping the series” are The Great Escape, The Guns of Navarone, Escape from New York, North by Northwest, Planet of the Apes, Dawn of the Dead, and the Bond series — but others, some culled from this Letterboxd list, are as inscrutable as Sons of Liberty. (I Am Number Four? Trance?) Outside the clear influences, only the list of “omitted all-time classics” — Citizen Kane, Tokyo Story, La strada Lawrence of Arabia, The Godfather — is mostly predictable.

For a look at his cinematic mind, see the below list of 34 favorite films (each accompanied by Kojima’s comments) and, following that, two videos where some are further discussed. Should you want even more, seee here for a look at the runners-up.

The Third Man, Dir. Carol Reed – UK (1949)
The direction, visuals and music are still burned into my brain. I’d mistakenly thought until I grew up that Orson Welles directed it.

Singin’ in the Rain, Dirs. Gene Kelly & Stanley Donen – US (1952)
I like the Hollywood musicals of the “good old days”, and this is my favorite. When I was a kid, I was in love with this period of America.

The Wages of Fear, Dir. Henri-Georges Clouzot – France/Italy (1953)
The extreme realism shocked me. It’s got its own Mario and Luigi. Yves Montand has great presence.

12 Angry Men, Dir. Sidney Lumet – US (1957)
This film made me think about just how inaccurate one’s assumptions and stereotypes can be. It also was my first exposure to the American jury system.

Kanał, Dir. Andrzej Wajda – Poland (1957)
Most people would probably pick Ashes and Diamonds as their favorite of Wajda’s films, but I like this one the best. It had a big influence on MGS, too.

The Umbrellas of Cherbourg, Dir. Jacques Demy – France (1964)
A bittersweet film. Catherine Deneuve is cute. This type of love story, where circumstances keep two people apart, really gets to me. I didn’t find out until much later that Deneuve’s singing was dubbed.

Django, Dir. Sergio Corbucci – Italy (1966)
I also love Spaghetti Westerns. This is what led to Ocelot, among other things, and this film is my favorite out of all of them. Django’s songs are good. He was the inspiration for Boktai‘s main character.

Fantastic Voyage, Dir. Richard Fleischer – US (1966)
This never gets old for me. I’ve also read Isaac Asimov’s novel, which was based on the film, not the other way around. A popcorn movie, it combines science fiction and espionage to great effect. The art direction and special effects depicting the inner workings of the human body are not only amazing but scientifically accurate as well. My biology professor in college gave the movie his enthusiastic approval.

Deep Red, Dir. Dario Argento – Italy (1975)
This is the greatest of all Argento’s films, and it’s my number-one horror film. Goblin’s music is cool. The revelation at the end is scary.

Taxi Driver, Dir. Martin Scorsese – US (1976)
This film was an eye-opener for me. I had no idea Americans, who seemed so cheerful, could feel lonely in the middle of a city. It resonated with me, given the loneliness that troubled me in my younger days, which is why it has a very special place in my heart. After I saw it I bought a jacket and a pair of boots to copy Robert De Niro. Needless to say, I did not get a mohawk.

Somewhere in Time, Dir. Jeannot Szwarc – US (1980)
I adore Richard Matheson’s original novel and this movie, which he also wrote. Jane Seymour is really beautiful. I’m a sucker for this type of romance movie. John Barry’s music is good, too.

Das Boot, Dir. Wolfgang Petersen – Germany (1981)
This is my favorite submarine film. It’s a powerful depiction of a group of men in extreme circumstances.

Mad Max 2, Dir. George Miller – Australia (1981)
The production design, the characters, the action, the violence, the suspense, the direction—it’s fantastic in every way. A classic that’s in my top ten!

Blade Runner, Dir. Ridley Scott – US (1982)
Its world and visuals are incredible. There’s nothing else I need to say about this one, either. More than science fiction, it’s a part of my generation’s culture.

Streets of Fire, Dir. Walter Hill – US (1984)
A coming-of-age rock ‘n’ roll film with action, violence and romance. It’s new wave music meets MTV. It instantly made me a fan of Diane Lane. There was a time when I would watch its ending every morning.

Mauvais sang, Dir. Leos Carax – France (1986)
I really like Carax, and this is my favorite work of his. It’s a cool movie.

A Better Tomorrow II, Dir. John Woo – Hong Kong (1987)
This is one of my favorite John Woo films, right up there with Hard-Boiled. I still cry every time I watch it.

Cinema Paradiso, Dir. Giuseppe Tornatore – Italy (1988)
This film also makes me cry—particularly the final scene, but in a way I never expected. A must-see for movie lovers. The child is good, too.

Fantastic Planet, Dir. René Laloux – France/Czechoslovakia (1973)
The originality of its world and style left me speechless.

Wicked City, Dir. Yoshiaki Kawajiri – Japan (1987)
One of Mr. Kawajiri’s best works. I respect him very much. It has an unrivaled speed to it! Seeing it now, it’s like watching The Matrix.

Crayon Shin-chan: The Storm Called: The Adult Empire Strikes Back, Dir. Keiichi Hara – Japan (2001)
This is the most recent film on the list. A tearful, painful yet inspiring film for my generation. Anyone who writes it off as just a kids’ movie is making a big mistake. It’s an amazing film that a family can enjoy together, laughing, crying, cherishing.

Yojimbo, Dir. Akira Kurosawa – Japan (1961)
One of my favorite Kurosawa films, along with High and Low and Seven Samurai. There was a TV series called Ronin of the Wilderness starring a character named Kujuro Toge (“Sanjuro” in Yojimbo and Sanjuro).

Asobi, Dir. Yasuzo Masumura – Japan (1971)
This is based on Akiyuki Nosaka’s novel. It’s not the best of Masumura’s films, but I just like it a lot for some reason. I was a fan of Keiko Sekine when I was a kid.

Castle of Sand, Dir. Yoshitaro Nomura – Japan (1974)
I was a fan of Seicho Matsumoto as well; I saw this film after reading his original novel. It has incredible direction, and moved and amazed me in ways the book didn’t, in ways only film can. Yasushi Akutagawa’s music is wonderful, too.

Burst City, Dir. Sogo Ishii – Japan (1982)
This is Sogo Ishii’s greatest work!! It has fantastic energy and soul! Mr. Ishii is my mentor in spirit. When I first saw this I thought, I want to be like him some day!

Night and Fog, Dir. Alain Resnais – France (1955)
This documentary belongs in my top thirty list. It’s based on Viktor Frankl’s novel Man’s Search for Meaning, which my father made me read as a kid as well.