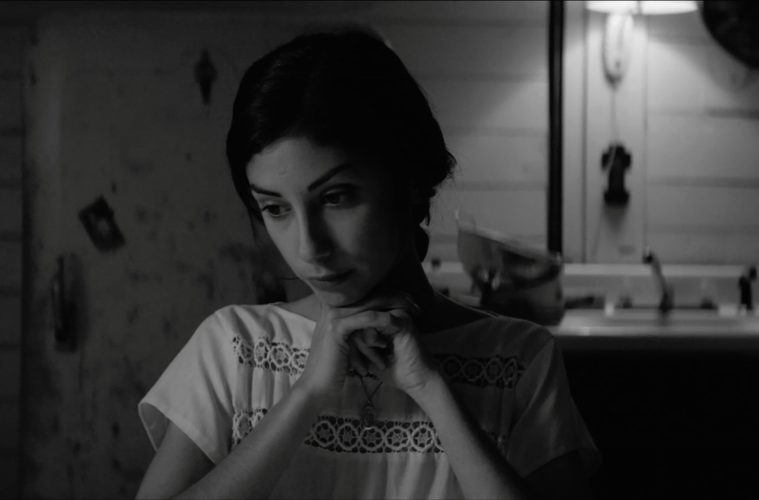 For as quaint and economical as it comes across, The Eyes of My Mother is a pull-no-punches horror film. This debut effort shows that Nicolas Pesce is not just a talent to watch (with your hand over your eyes) but his attention to details make this effort as striking as it is horrific.

In the film, a traumatic event befalls a young girl and her family. Soon after, she begins to associate pain and death with love and friendship in increasingly dangerous ways. At the festival, we spoke candidly about the elements and plot points in Pesce’s film. So, be advised, this interview contains spoilers.

The Film Stage: Nicolas, I have to tell you that I’m not sure I liked your film, because of how it made me feel, but I will never forget it.

Nicolas Pesce: [Laughs] Great, that makes me so happy to hear. [Laughs]

There’s something unnerving about the level of horror you brought to the screen, so matter of fact, in black and white. You also didn’t hold anything back. It reminds me of Jodorowsky’s El Topo and Romero’s Night of the Living Dead. It leaves such an impact, so, please, tell us where this came from.

Your reaction is great as I was aiming to unsettle and unnerve. I’m glad you bought up El Topo because I never bring up those psychedelic films, but there is an unnerving quality to all of Jodorowsky’s stuff. You can’t put your finger on what’s wrong, but there’s always something disgustingly wrong, and it makes you want to jump out of your seat – that’s very much what I was going for with this. I wanted to claw into the darkest recesses of your brain and poke at things that you don’t want to think about.

That’s part of the reason why the movie is so short, and I don’t really show any of the violence. But I did want it to be a quietly aggressive experience. I wanted to explore the moments in between the horror and how scary life can be when you know what someone is capable of especially when you know where someone’s logic is at. So seeing them go through their everyday life is so much more terrifying. The things that are so banal take on a whole new meaning when the person spends the other parts of their time doing distinctly dark things.

There’s that one line where young Francisca asks the killer why he did it, and he says because, “It feels amazing.” Every line of dialog was so calm and commonplace that my face was transfixed in disbelief and horror for three-fourths of your film. I hate to ask, but is there a longer cut? Does a “worse” version of the film exist?

Oh, there was a worse version at one point. But what was important for me was treading that line where you want to feel so bad for her Francisca, and that she needs a hug, but then if you get too close, she’ll stab you. So there’s that point, at the end of their conversation, where the killer goes, “You’re gonna kill me, right?”and she goes, “No, you’re my only friend.” It’s so sad, and so depressing.

To me, the movie is about loneliness and losing the one person who made you understand the world. Without them, you’re at a loss for everything. That leaves Francisca trying to scramble to understand everything, but she’s going about it all wrong and not quite understanding how to cope with the loneliness.

But it’s a world where horrible things happen, and I don’t necessarily treat them as horrible. She does it, and then moves on. It’s part of the fabric of her world, and there’s something painfully ordinary when she’s stitching the woman’s eyes at the end. It’s terrible to see how she kind of lovingly takes care of Charlie in the barn. I think that the intentional grossness I was going for toggles oddly between her trying to be good and solve her problems, but then doing them in these horribly disgusting ways.

Getting the audience to a point where they don’t know how to feel about her was tough, but it was my goal. The best thing I could ask for is to have people leave the theater going, “I just don’t know what to think.”

She does despicable things moreso than a lot of slasher movies and her level of torture is pretty depraved, but not in her eyes.

Exactly. To her, it’s logical and she needs to do it for whatever reason, and I feel that I need to get the audience in the mind of this girl, even if it’s only fleeting, so when they start to think, “I feel for her,” to me, that’s the scariest thing. You don’t want to feel for a serial killer, so you really don’t want to see bits and pieces of yourself in there.

Hopefully, what makes people the most uncomfortable is that as crazy and wild as she gets, there’s moments you can see yourself having the same emotions but not going to the lengths she has. Her grief is very real, even if she is a monster.

Francisca is incredibly lonely, directly tied to losing her mother and father at certain points. But then she picks up a woman at a bar, and you know it’s not the first time. You can tell she wants someone in her life, but she can’t keep from being who she is. It’s a scarily interesting duality. But let’s talk about chaining people in the barn. It was a means to control the wanderer, Charlie, and then it became a way to keep people in her life.

Yeah, it was, with the father, a way to contain the wanderer, but only because he didn’t know what to do with him. This reminds me a lot of my grandfather. He’s the kind of guy that believes there would be nothing that would cause him to call the police. He was from Sicily, and he lived in the Bronx, and just thought that, “Whatever happens to me, I will deal with it. No one else is going to handle my family’s problems.” So I took that to the most extreme extent, and here’s a guy whose wife has been murdered, and he has the guy who did it, but he’s not going to call the cops and he doesn’t know what to do. It gets weird when his daughter thinks she’s helping him by finishing the job for him.

[Editor’s note: spoilers for the ending ahead.]

In a way, this reminded me of Rob Zombie’s The Devils Rejects in that it’s very brutal, and you get to an ending where the bad guys get what they deserve, but it’s not triumphant. It’s a little sad. So was what we saw the original ending, or was there something else you were developing? That was always how I saw it ending, and there’s an extra layer of depth I aimed for. The ending happens and you have this girl who just wants connection and love and a companion, and she goes through all of these things to get there. But, in the end she’s taken out with a bang and you think about so many of these serial killers who get swept under a rug. Now I’m not saying they deserve legacies — because they do wilder things that most normal people would never do— but their end, the finale of their life, is done in an instant. They go to jail, they’re on the news once, and no one ever thinks of them again.

For a girl who we’ve just spend 75 minutes with, her life is reduced to the cops busting in, saw her with a knife and shot her, and nothing else matters. There is sort of a banality to the end of everyone’s life, you know? There is no grand, “I did all this and this is what it meant.” But really, it meant nothing. You tried, you failed, and now it’s over. To me, the world where Hannibal Lecter walks off into the marketplace at the end of Silence of the Lambs is not a real one. I wasn’t trying to say, “Beware, these people are out there.” This is about one girl who wanted one thing but she never got it.

One idea I had was to have the news play over the credits, and it would tell about how the police took her down. But they don’t talk about anything – they just list the crimes. I think it’s unfair that anyone who commits crime like to this gets their life reduced to mere facts. I’m not trying to justify their actions, but in attempts to understand any sort of violence, we’re not going to get anywhere with blanket statement like, “Oh, they were horrible” They became that way for a reason, and there would be a lot less killers if we learned why they were the way they were and helped them.

You make two good points in the movie: 1) The importance of having a strong two parent household. And 2) Don’t pick up hitchhikers.

[Laughs] Totally! I did throw a lot of classic horror tropes in there, too. Don’t let the stranger in your house… don’t pick up a hitchhiker… don’t give your baby to a stranger! Then, similarly, there are things I just love, like the fingernail breaking. Those never get old so, for me, it was about finding a story where I could weave in all that stuff in a fresh and unique way.

To end this, talk to us about shooting in black and white. It gives the striking visuals a real edge.

Shooting that came, partially, from the movies I love: Night of the Hunter, Strait-Jacket, Psycho, and by going black and white, that kind of tells the audience what kind of movie they are about to watch. It’s like putting you in the Alfred Hitchcock boat as opposed to the Tobe Hooper boat. Also, its use was more expressionistic to try and emulate what’s going on in Francisca’s head, and the way in which she sees the world. Also, technically, it let us play with filmmaking techniques that let us do things visually that you can’t really get away with in color: shadows, lighting, day for night, and all sorts of reality-bending tricks. In black and white, things can become otherworldly, and that heightens the unsetting feeling.

The Eyes of My Mother screened at Fantastic Fest and opens on December 2.