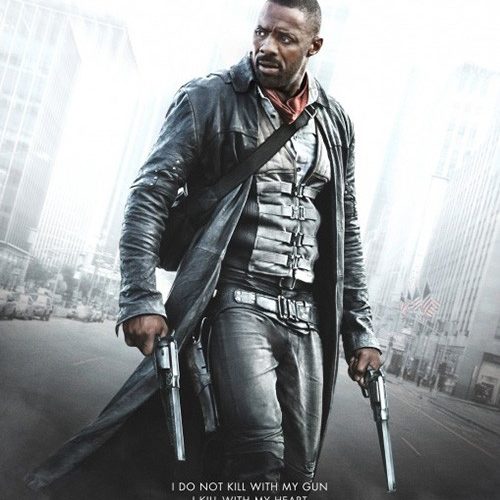 From start to finish The Dark Tower, directed by Nikolaj Arcel from the popular book series by Stephen King, feels like something salvaged from something else. The result is a mostly entertaining piece of fantasy pulp that is a victim of trying to do too much and too little at the same time. For better or worse, this film is a testament to how hard telling a story can be, especially when a version of that story has been told over many books over many years and is beloved by many fans.

But let’s stick with what’s in the movie. There’s a kid named Jake (Tom Taylor) who’s having nightmares he’s convinced are real. Jake’s mother (Katheryn Winnick) and crappy stepfather (Nicholas Pauling) think he’s crazy, but of course he’s not. There’s a Man in Black (Matthew McConaughey, eating ham sandwiches and loving it) using the minds of children to destroy a… ahem… dark tower… and a gunslinger named Roland (a superb Idris Elba) trying to stop him. There are multiple worlds and portals and reasons for vengeance. Once Jake stumbles into Roland, it’s a race to save the tower and prevent darkness from doing its thing.

Running at a lean 90 minutes (before credits), most of the movie is dedicated to world-building, Roland explaining to Jake what’s going on and why. Nifty details come and go quickly, presumably shout-outs to the source material. (Be sure to notice a Rita Hayworth poster in the background of one scene in the third act, a shout-out to King’s own “Rita Hayworth and Shawshank Redemption.”) The set-pieces, few and far between, get by on the shoulders of movie stars, bad CGI be damned. Elba and McConaughey do entertaining work here, playing to their respective strengths throughout.

Even before its theatrical release, Arcel’s film has been plagued by reports of rewrites (the screenplay credits Akiva Goldsman & Jeff Pinkner and Anders Thomas Jensen & Nikolaj Arcel), poor test screenings, reshoots, and significant oversight in the editing room. To be fair, most of these things are not altogether uncommon at the studio level, but it certainly appears that The Dark Tower had more than its far share of each. And yet, the course correct mostly works.

McConaughey serves as a worthwhile villain, playing fast and loose with his demonic powers, Elba broods better than anyone, and Arcel finds humorous moments in a fish-out-of-water sequence in New York City. And while the seams of a larger, deleted narrative poke through in some bad sound-mixing and abrupt cutting, it’s not enough to disrupt the breakneck pace. One imagines an impossible amount of credit needs to be given to the film’s editors, Alan Edward Bell and Dan Zimmerman.

So much digital ink is spent on lambasting big movie studios for mining intellectual property for nothing more than general framework and name recognition. There is certainly a case to be made that that’s what happened here. What seems more plausible, however, is that a bunch of creative people attempted to find a way into a epic narrative and came out with a short, punchy blockbuster destined to be forgotten.