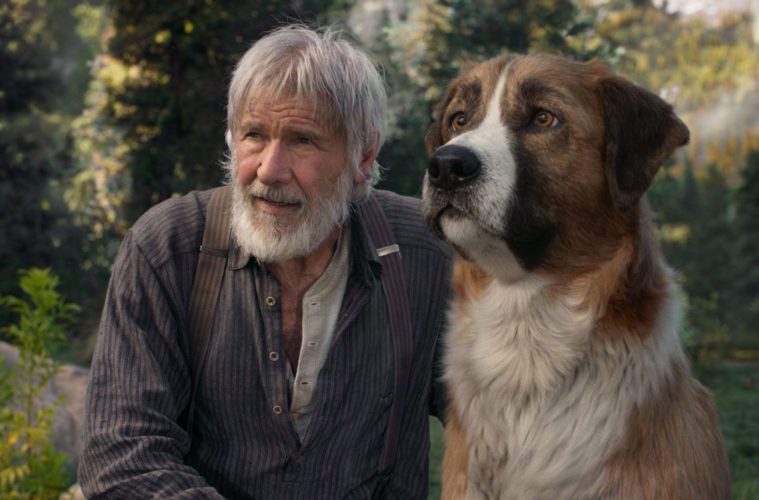 The Call of the Wild plays like the kind of live-action movie Disney released in the ’60s and ’70s (Swiss Family Robinson, The Castaway Cowboy), then in the ’80s and ’90s (Six Days, Seven Nights, The Horse Whisperer) under the Touchstone banner. This film, adapted from the Jack London novel of the same name, was developed as a 20th Century Fox project, before the studio got scooped up by the Mouse House.

Directed by Chris Sanders and starring Harrison Ford, the playful-yet-nostalgic tone is established early on. We meet a dog named Buck, the live-action/CGI hybrid lead of the story, as he bounds about a luxurious California home. His owner, Judge Miller (Bradley Whitford, always a welcome sight), loves the pet but is tired of his hyperactive shenanigans. Buck eats up a celebratory feast because he just can’t help himself, the rascal! He appears to be a creature destined for bigger things. If those last two sentences read a bit cheesy, consider it a fair approximation of the film itself. Which is to say, it’s a very traditional family picture.

We are told in the opening moments that the Klondike Gold Rush is going on and there is a need for sled dogs in Alaska. Within minutes, spoiled Buck is kidnapped and shipped north, taught the “law of the club” by his evil transporters and eventually roped into a sled team for a pair of mercifully kind, charming mail carriers (Omar Sy and Cara Gee). In the town the sled takes off from, Buck meets John Thronton (Ford), a gruff loner who takes a shine to the canine.

Written in zippy fashion by the ever-accomplished Michael Green (Blade Runner 2049, Logan), The Call of the Wild has no delusions of grandeur. It tells its tale briskly, leaning heavily on the animated elements throughout. Now, this has been a source of criticism ahead of the film’s release. Is the CGI dog distracting? The answer, of course, is that your mileage may vary. For this reviewer, the design of Buck works. We see every emotion on the animal’s exaggerated face and in his super-heroic actions. If one recalls The Lion King remake and that film’s distinct lack of such personality in virtually everything that appeared onscreen, this is a welcome improvement.

Sanders, who has directed impressive animated films like Lilo & Stitch and How To Train Your Dragon, is the right man for the job. Although the dog is clearly (mostly) animated, the secret here is that most of the movie is played as if it is animated. Nearly every performance is at a dramatic level akin to a classic Disney animated feature. Consider Bradley Whitford’s facial hair or villainous Dan Stevens’ sneers or pompous Karen Gillan’s over-the-top accent. The anchor is Ford, who delivers a world-weary turn in the back-half of this film that will most certainly go under-celebrated as this movie year pushes forward. What a small treat it has been to watch the world’s biggest movie star transform into a lovely, nuanced character actor in his latter years.

Cinematographer Janusz Kamiński, a long-time collaborator with Steven Spielberg, keeps things bright, while composer John Powell provides some semi-inspiring music that leaves a bit to be desired. Ultimately, it’s the upbeat energy from Sanders’ direction that keeps the engine going. The Call of the Wild is a welcome adventure for a cold winter’s night.

The Call of the Wild opens on Friday, February 21.