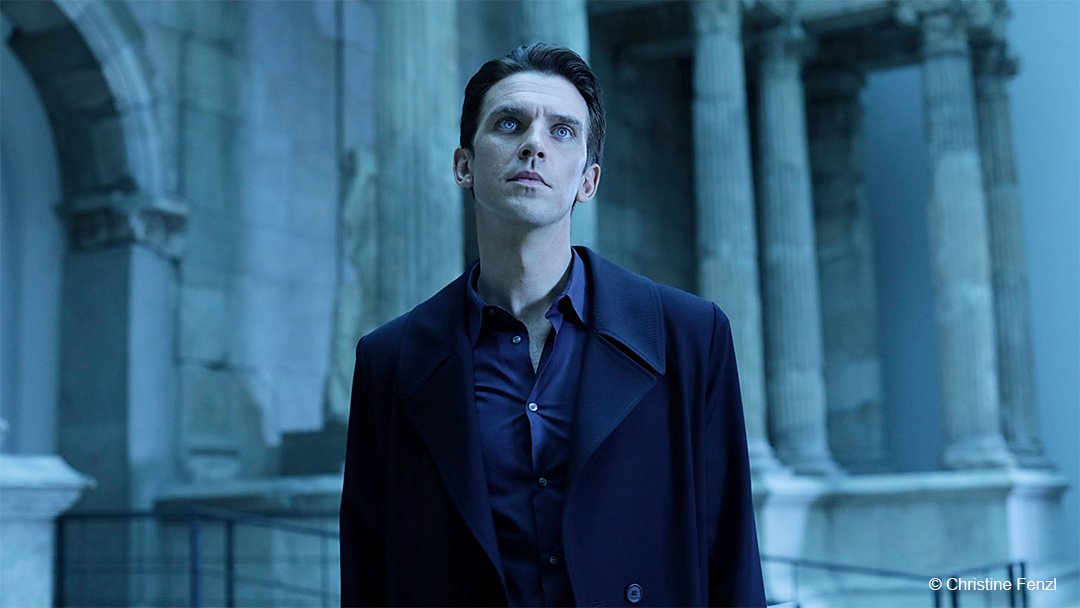 Falling in love with a robot isn’t good news, as Her and Blade Runner (both 2019 and 2049) tell us. In I’m Your Man, unspooling in competition at Berlin, a forty-something museum director (Maren Eggert) is justifiably nervous—she’s in a film named after a Leonard Cohen track, which is only asking for trouble—when asked to try out a new romantic partner. That’s because this is a “humanoid robot,” Tom, algorithmically aligned to her romantic preferences and played by dashing English actor Dan Stevens in a performance in which he impressively speaks fluent German.

But director Maria Schrader’s film, based on a short story by Emma Braslavsky, is less sci-fi-inclined than you might expect, concerned not so much with an apocalypse for human connections but with what our relationship with technology teach about us.

Eggert plays Alma, a researcher in ancient poetry (what could be more human?) at Berlin’s Pergamon Museum, asked to take part in a study ostensibly in exchange for funding for her work. She must live for three weeks with Tom, a humanoid who is designed to be her perfect life partner. (Toni Erdmann‘s Sandra Hüller takes a scene-stealing supporting role as their matchmaker.) Yet Alma herself is emotionless and mechanical, an unsocial animal who works late into the night, living a lonely existence in a high-rise apartment. Tom is designed for one purpose—to make Alma happy—yet this prime directive angers her. “Everyone wants to be happy,” suggests Tom, and Alma slowly comes to terms that she’s unconsciously embraced the state of unhappiness that is now a daily ritual.

Tom is perhaps the role Dan Stevens was born to play, perfectly suiting his nerdy, slightly creepy poshness developed from his turn on Downton Abbey, his lilting, British-accented German sounding as off-puttingly formal to English-language ears as it surely does for Alma. (Tom’s says Alma’s algorithm shows her preference for something “slightly foreign.”) His almost-but-not-quite natural behavior echoes what we know of the uncanny valley, the idea that an almost-human appearance provokes repulsion because of it echoes so closely a real person.

Alma complains that since he’s a robot, Tom and herself aren’t having a “dialogue” but instead everything she says is being carefully tabulated by Tom’s internal supercomputer to reflect just what she wants to hear. “I’m acting in a play but there’s no audience,” she shrieks. Yet that’s the conceit of this Pygmalion redux for the 21st century, with Tom becoming not just a prospective partner but also a sounding-off point for her own insecurities. As Alma teaches her robotic lover how to interact with humans, she herself transforms. There’s a surprisingly touching moment when this companionship, real or otherwise, finally allows her to confront her own past trauma.

Alma’s growing feelings for Tom show that she succumbs to the most human of traits, unpredictability. Unfortunately the narrative twists and turns of Schrader’s film could’ve been predicted from the first frames. Still, it would be churlish not to report that there are some laughs and profound moments to be discovered here.