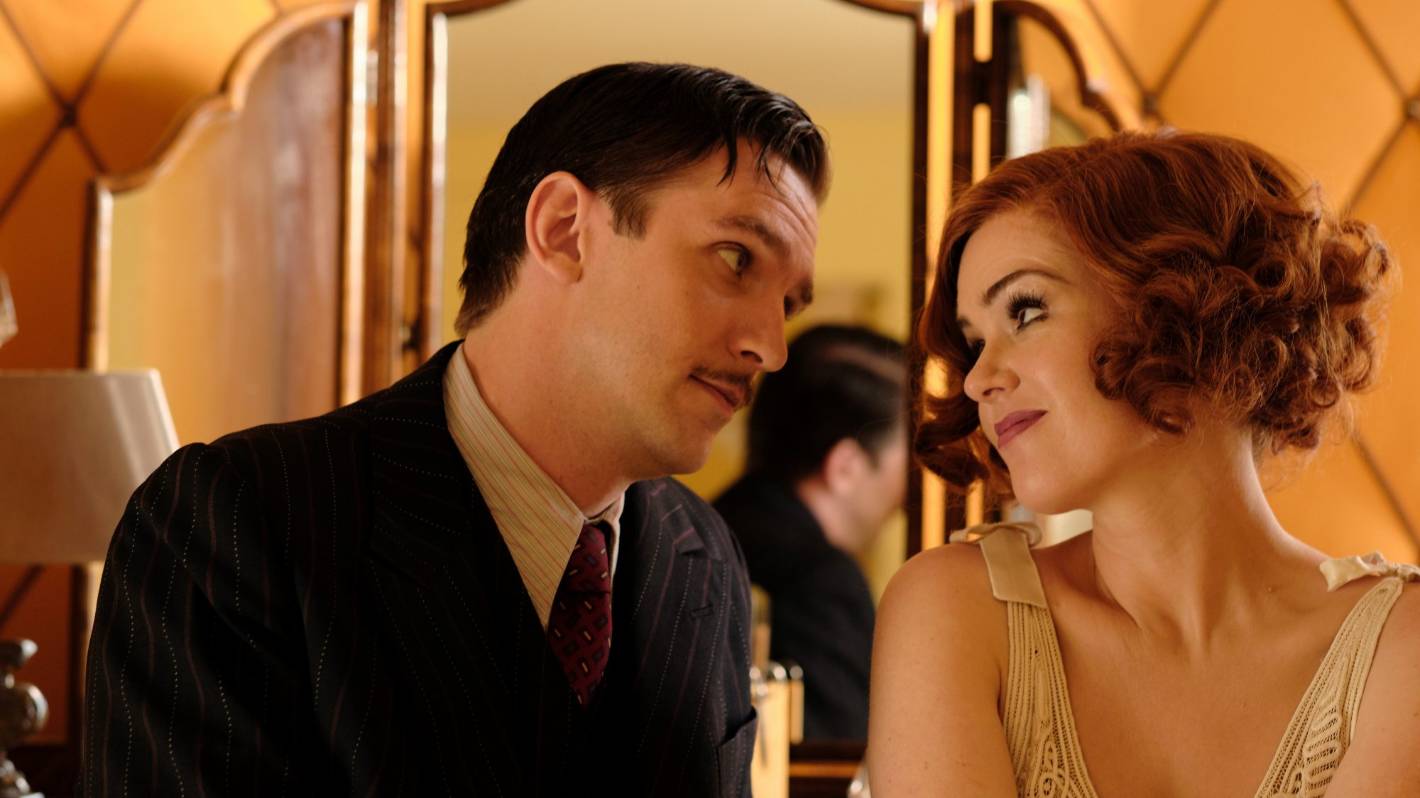 Charles Condomine (Dan Stevens) is plagued by writer’s block—so much so that his wife Ruth (Isla Fisher) talked her film producer father (Simon Kunz’s Henry Mackintosh) into paying him to adapt his best-selling detective novel debut into a screenplay. The hope is that an easy task without the need for new ideas will get the creative (and sexual) juices flowing again so that they can push their beds together and maybe even cross the Atlantic to Hollywood. No matter how supportive Ruth has been, however, Charles still can’t muster more than an all-caps “HELP” upon the page before losing himself to another temper tantrum. If only his muse was by his side: the first Mrs. Condomine (Leslie Mann’s Elvira), who tragically died seven years prior.

C’est la vie, right? They’ll just have to push through instead: Charles banging his head against his typewriter and Ruth wishing he would long for her as much as he obviously does for Elvira. So they ignore their troubles and waste the days with their friends Violet (Emilia Fox) and Dr. Bradman (Julian Rhind-Tutt) until finding themselves at the theater to watch Madame Cecily Arcati (Judi Dench) practice her formidable power as a medium on-stage. It’s here that Charles gets an idea—not because the show was good, but specifically because it’s a disaster. If he can pay Cecily’s charlatan to perform a private séance at their estate, maybe he’ll be able to crib her mannerisms and spice up his script enough to finally want to write again.

Edward Hall’s Blithe Spirit thus moves along to the beats of Noël Coward’s play even if screenwriters Piers Ashworth, Meg Leonard, and Nick Moorcroft have put a very different spin on the spaces in-between. Arcati unwittingly conjures Elvira’s spirit during a trance, Charles is the only one who can see and hear her, and everyone else thinks he’s going mad until the ghost’s ability to interact with the real world manifests a few parlor tricks that Ruth cannot deny. Rather than simply go with Coward’s screwball comedy that eventually has both Mrs. Condomines wreaking havoc with Charles’ life, however, the filmmakers take a left turn into jealousy through the work itself. Because if Elvira’s presence ensures the screenplay will be written, the hassle proves worth it.

There’s a caveat of course. The more time Elvira spends with Charles, the more their love rekindles. The more those feelings become real, the more she does too. Cecily warns that it’s very possible Elvira could take corporeal form and steal her husband back if Ruth isn’t too careful, but what’s she to do when she cannot see or hear her nemesis? They’ll have to just hope no one dies once tensions mount along with selfish ideas of ownership (to the writing and the man alike). The film devolves into a series of pranks as a result wherein Elvira tries to ruin Ruth’s reputation and Charles’ career before turning ever more malevolent. Not enough to become truly evil, though, since this is a breezy little escapade of repetition.

So when I say Elvira might become human again, it’s not as much about the desire to commit murder as it is to have sex. Marital sex. Ghost sex. Charles will take it all. Why worry about his fate when his libido is satisfied? And why worry about offending one woman when the other can take her place until she’s offended? It’s an “artistic” choice that almost completely erases the source play’s second half considering the dead can’t affect the living here unless Cecily accidentally allows them to with a spell (and even that’s only true until the film changes the rules five minutes later thanks to a climax moving at breakneck speed without any interest in consistency). I wanted them all to die so I could leave.

Considering I saw the play performed locally about fifteen years ago and had a great a time, my reaction to the film proved a sore disappointment. The decision to make Blithe Spirit into a comedic variation on The Wife is interesting, but the screenwriters are never able to get us to care about the novels (let alone the wife) as more than a device. It merely transports Elvira’s thoughts to spice up Charles’ story with twisty revelations into the story on-screen with but a quick punchline before fading to black as payoff. That’s not to say Stevens isn’t effective playing a cluelessly smarmy hack who feeds off his wives’ backs. He is. Focusing on that and excising Ruth’s ability to “fight” Elvira simply removes a necessary narrative transition.

Because if we’re just going to watch Charles’ comeuppance for 90-minutes, why is Ruth even here? To be the wet blanket? To be a conduit to Hollywood so famous names can be bandied about every once in a while? It’s as though the filmmakers enjoyed the first half of Coward’s play so much that they decided to make a movie out of it and relegate the second half to epilogue status. So we watch Elvira cause chaos (Mann is a lot of fun). We watch her cause more chaos. And more and more chaos until the deaths (and spirits since Cecily’s whole fascination with the occult stems from a desire to call her dearly departed husband back from Heaven) pile up right before the end. It’s absolutely exhausting.