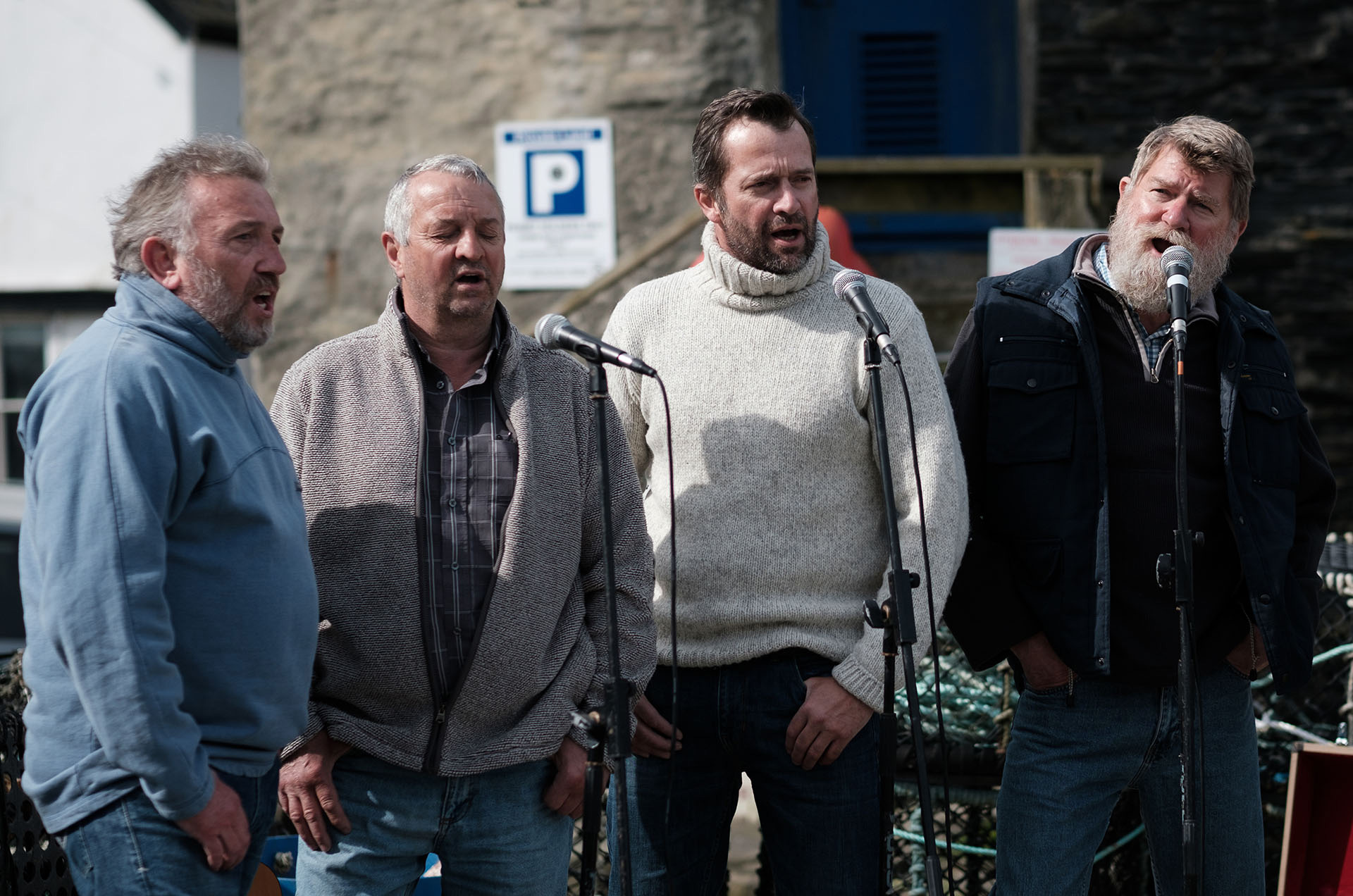 The moment a group of Cornish fishermen and lifeboatmen turned their charitable crooning on the shore of Port Isaac into a Universal Music record deal that saw them debut in the top ten was the moment producers started falling over themselves to sign the life rights for a cinematic adaptation. And just as the band subsequently released another two collections of sea shanties and traditional folk songs despite their original one-album contract, it appears that Chris Foggin’s feel-good dramedy will soon receive its own sequel. I guess that’s the power of Fisherman’s Friends and their inspiring bond steeped in history, work ethic, family, and friendship. They’re a band that’s as easy to underestimate as they are to champion once they’ve proven you wrong because the music doesn’t lie.

That doesn’t, however, mean that screenwriters Piers Ashworth, Meg Leonard, and Nick Moorcroft had a home run by simply documenting the fishermen’s unlikely fame. Old men set in their ways aren’t as flashy as say a romantic subplot placing the tenacious music manager (Daniel Mays’ Danny) hoping to sign them upon the path of one of the singer’s daughters (Tuppence Middleton’s Alwyn). The decision to have the music augment this stranger-in-a-strange-land’s evolution away from materialism instead of focusing solely on the town’s story may be disingenuous, but it does ensure a built-in palatability for audiences. And while the result is therefore destined to a formulaic fate, Foggin and company never prevent the inherent character of the setting from shining bright regardless. Its Cornish legacy remains intact.

This is important since the comedy at the beginning of the film can be a bit shaky as these two worlds collide. We go from the quaintness of tight-knit families readying for their early start to the day to the boorish mannerisms of an entitled quartet of Londonites driving to Cornwall without any respect for its culture or the ocean. Troy (Noel Clarke), Henry (Christian Brassington), and Driss (Vahid Gold) can’t leave the frame soon enough once their toxicity sucks the air right out of the area’s majesty as though they’re arch Disney villains who see the purity of Port Isaac as a weakness that should be exploited even if only as a joke. Troy would burn the town down if it meant laughing at his subordinates’ expense.

Danny is exactly that: a man who believes he’s amongst friends despite the ease at which they use their power over him professionally to satisfy their whims. Because he’s as vapid and uncouth as they are where it comes to appreciating and learning that which he doesn’t know, the only reason he even has a chance to earn our sympathy is the fact that he’s drawn the short straw. He’s the punch line this time. He’s the man left behind to go on a wild goose chase to nowhere while the others return home and laugh at his gullibility. The film therefore posits that Jim (James Purefoy), Jago (David Hayman), Rowan (Sam Swainsbury), Leadville (Dave Johns), and their friends’ success hinged upon callousness. It’s not the best inroad.

That’s what happens when you tell one group’s story from another’s lens, though. The fishermen become side players to their own movie as the “outsiders” dictate the narrative propulsion. So you should expect to breathe a sigh of relief once things become firmly entrenched in Cornwall alone. There’s still plenty of opportunity to roll your eyes once coincidences abound (Danny is smitten by Alwyn before realizing she will be his boarder and that her father Jim is the decision-maker within the band), but we finally get to see how these men work, juggle singing as a passion alongside it, and live by their code of “one for all” when it comes to a brotherhood that’s spanned generations and will continue to do so for many more.

Similar to Danny (and Jim for that matter) learning how property and material objects pale in comparison to people when it comes to valuing the life they’ve built for themselves, we too realize that the roads Fisherman’s Friends travel in such a short period of time means nothing if we don’t genuinely like the men whose dreams we’re watching come true. Their sense of humor is charming (and in stark contrast to Troy and company’s maliciousness), their pride in home and devout loyalty to each other is moving, and their modesty in knowing the music will always come second to their day-to-day jobs and family is refreshing. That we experience these things only because they inevitably impact Danny is unfortunate, but they resonate just the same.

Convenience actually helps in this respect considering blood relations run deeper than Jim and Alwyn. Jago is the former’s father and latter’s grandfather on top of being the guy who taught many of the other group members how to fish and sing. The family matriarch Maggie (Maggie Steed) tends the local bar owned by Rowan and his wife Sally (Mae Voogd) and Alwyn’s daughter Tamsyn (Meadow Nobrega) keeps everyone young. So while it’s convenient that Danny’s chase of Jim for business and Alwyn for pleasure embroils him in every single facet of the town itself, it’s also the quickest way towards making us invest in what happens to them all. We recognize how one person’s actions indelibly change the others’ lives and appreciate the shared love behind it.

That’s a powerful thing once the plot asks some to break others’ trust or promise results that cannot be met. And it renders the emotional fallout of such situations with authenticity despite there being zero twists or turns along the way. So you can groan during a pre-climax montage of characters looking sad when everything appears to have fallen apart even as you understand the reasons why they’re lamenting their pain. A faulty delivery device doesn’t diminish that truth or take away from the requisite happily ever after we know is coming. Purefoy, Hayman, Middleton, and Mays are too good to let that happen. They’ve willingly embraced the clichés to honor a story brimming with the kind of hope we need currently and it’s worth following their lead.