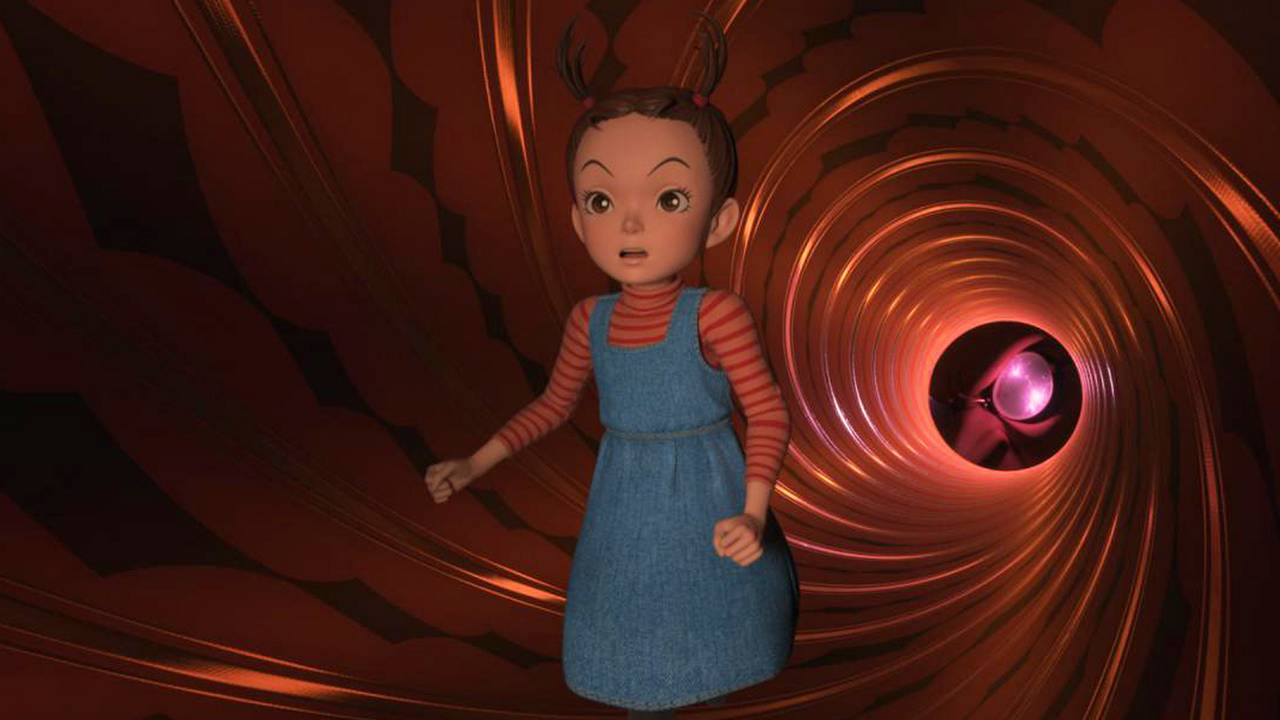 Those familiar with Diana Wynne Jones’ children’s book Earwig and the Witch will be surprised to find Gorô Miyazaki’s cinematic adaptation beginning with a chase scene pitting a red-headed woman on a motorcycle against a yellow Citroën on her tail. They weave in and out of traffic with impossible speed and maneuvering before we see the first bit of magic used to create some extra distance. That’s when a cut occurs for us to watch the unknown redhead walk through a cemetery towards a large orphanage. With a rushed goodbye she leaves a baby at the door. All that’s with her to give any sign of identity is a cassette tape and a note asking for shelter until her mother’s promised return … even if it takes years.

Screenwriters Keiko Niwa and Emi Gunji have thus given shape to Jones’ brief backstory, extrapolating on the note’s MacGuffin (“I must escape the other twelve witches after me before retrieving my daughter”) in a way that has us anticipating said return despite the book rendering one unnecessary. It’s an odd choice that ultimately sets the audience’s expectations much higher than this otherwise entertaining if slight yarn can hold. They try to erect some scaffolding by way of a completely new rock band subplot that seeks to connect the characters with a bow, but it only adds to the imbalance since doing so demands a payoff beyond what Jones intended. More than Earwig (Taylor Henderson), they’ve made things about a coven the story’s abrupt end fails to sufficiently explain.

What’s great about the book is the way in which it brushes Earwig’s mother under the rug. The idea that she’s the daughter of a witch adds intrigue and perhaps implicit magic to the way she has grown to expertly manipulate those around her, but that’s all it needs to do. That Earwig is eventually adopted by Bella Yaga (Vanessa Marshall) and Mandrake (Richard E. Grant)—a powerful witch and warlock in their own right—becomes a welcome incident born out of coincidence rather than destiny. Miyazaki (who took over the project from his father Hayao in order to make it Studio Ghibli’s first 3D-animated feature) and company’s desire to transform it into the latter only complicates things by painting them into a corner they can’t quite exit successfully.

Don’t therefore expect a satisfying payoff to that new content. It’s fun, though: the idea that Bella Yaga and Mandrake have a history wherein they used to be rock stars is exciting both thematically and for Earwig’s youthful exuberance. That they now wallow in the self-pity of their failures by pretending music no longer exists (Bella) or playing it in secret only to stew with rage when a new career as a novelist doesn’t pan out (Mandrake) makes it an in-road into their passion that Earwig can exploit to get her way. She now has more leverage with which to take control like she did at the orphanage (with the headmistress wrapped around her finger and best friend Custard always in tow). Music becomes her trump card.

The book’s acclaim without its inclusion proves she doesn’t really need it, but it nevertheless bolsters her upper hand once things get chaotic. We’re talking about formidable conjurers after all. Just because Bella Yaga is selling pedestrian potions to lazy humans looking to win contests or fall in love doesn’t mean she can’t instill fear in all who cross her path when the occasion calls for it—including her familiar (Dan Stevens’ talking black cat, Thomas). And just because the Mandrake is ostensibly going all emo when playing keyboard in his room with a figurative “do not disturb” sign on the door doesn’t mean he and his demon minions won’t turn a wall into lava so the full, dragon-scaled breadth of their malice can be unleashed.

That potential for nightmarish carnage is what makes the story so great—that and the fact that Earwig often revels in the pandemonium because she knows her calm demeanor in its face will keep those wielding it as a weapon off-balance. Her character is an absolute delight in this way. She sprinkles on the sugar when needed to survey her environment and collect data for her next move and pours the spice when the time to pounce arrives. She’ll do whatever work Bella Yaga demands as long as she gets to learn some magic in return. The moment the woman ignores this quid pro quo, however, is the moment when Earwig finds a way to teach herself how to dole out revenge. She’s the perfect mix of precocious and devious.

And it’s enough to really enjoy what Miyazaki has put on-screen in what’s an exactingly faithful adaptation when stripped of the rock-n-roll. That this music gives the whole some extra character and electricity also almost makes up for the reality that the ends of its addition don’t quite justify the means. Where the benefit of the doubt is tougher to supply, however, is in the choice to go with 3D-animation in lieu of the studio’s bread-and-butter 2D. Bella Yaga’s laboratory and the Mandrake’s firework-sparking devolution into pure wrath aside, most of the environments and characters appear unpolished and plastic—especially since we’re used to the elaborately sumptuous frames Ghibli-branded films usually deliver (although the bacon and French toast did look delicious). Even Earwig feels a bit flat.

Bella Yaga and Mandrake have the same disproportionate figures the elder Miyazaki’s villains are known for and yet that comparison only had me wondering how great hand-drawn versions would have looked instead (crayon-like drawings during the credits supply a prospective glimpse). Does the animation hinder the story or content, though? No. You eventually get used to it like anything else. Would I rather have been blown away? Of course. I’ll instead think of Earwig and the Witch as an interesting experiment. A first run at a new medium with a breezy, light-on-plot escapade reminiscent of Kiki’s Delivery Service rather than the densely intricate narrative of Jones’ own Howl’s Moving Castle. It will entertain kids and adults alike with humor and magic before it fades away later that day.

Earwig and the Witch opens in limited release on February 3 before hitting HBO Max on February 5.