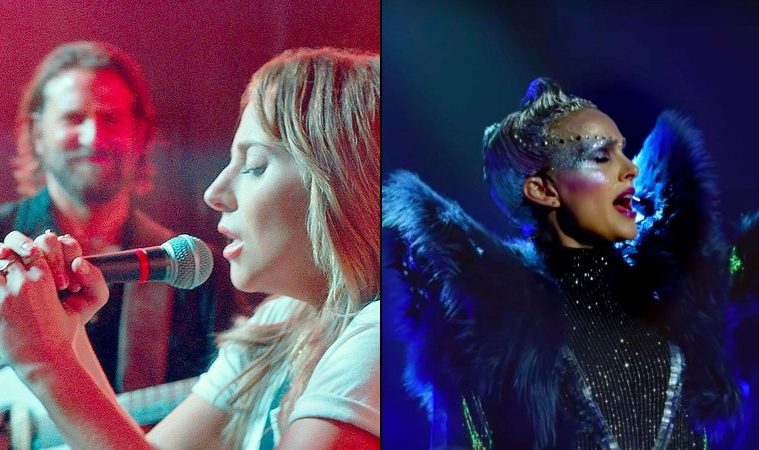 The Best Double Features of 2018

Drive-in theaters may not be the popular viewing spot they once were, but with the overwhelming accessibility we now have, one can program their own personal double bill with back-to-back features that hit a specific thematic sweet spot. Today, we’ve run through the gamut of 2018 films to select the finest pairings (and a few triple features). Check out list the below, and we’d love to hear your own picks, which can be left in the comments.

What makes a group of people a family, and what makes families so resilient? Markedly different in settings and plots, two of the year’s greatest achievements in film, Alfonso Cuarón’s Golden Lion winner Roma and Hirokazu Kore-eda’s Palme d’Or recipient Shoplifters, follow tight-knit groups of people in their struggles to stick together against all sorts of adversities. In Roma, Cuarón’s elegiac childhood memoir of a middle-class family in Mexico City, a wife watches her marriage collapse and grapples with a future as single mother of four–but the whole drama is seen and told from the perspective of the family maid, remarkable newcomer Yalitza Aparicio, whose proximity to the family makes her part of it too, conjuring up some extraordinary moments of tenderness. In Shoplifters, another household struggles to make ends meet by relying on subsidies, pension money, and petty thefts. Dark secrets lurk, but it is only when a new child is brought under the same roof that the past resurfaces, and the family must re-negotiate their bonds, lest it be shattered altogether. This is cinema at its most humanist heights, glowing with the aura classics are made of, and tipping its hat to a few of them; should you wish to make the duo a trio, consider (re)watching De Sica’s Bicycle Thieves. – Leonardo G.

Minding the Gap and Skate Kitchen

Debuting at Sundance Film Festival this year, these two skateboarding films—one documentary and one that blurred the lines of fiction—went beyond the standard sports film to not only depict one’s passions for their obsession, but the people behind it. In Minding the Gap, Bing Liu took a gut-punchingly personal look at his past and the demons both in his life and those of his friends–and how skateboarding was a salve to heal the pain. In Skate Kitchen, Crystal Moselle once again intimately explores NYC’s Lower East Side, this time with the all-female group Skate Kitchen at the center. While Moselle’s film is an empowering coming-of-age tale, Liu’s debut takes a look at the heartbreaking effects of a damaged childhood. – Jordan R.

A Star Is Born and Vox Lux

Arguably the most obvious pairing of the year (and definitely an obligatory double feature for all Venice Film Festival and TIFF attendees this September), Bradley Cooper’s A Star Is Born and Brady Corbet’s Vox Lux zero in on two women skyrocketed to planetary fame, but with starkly different genesis stories. Natalie Portman’s cantankerous, foul-mouthed and all-out bonkers Celeste becomes an overnight sensation after surviving a school shooting as a teenager and singing a hymn of hope during the vigil; Lady Gaga’s Ally (a 21st century rendition of the Esthers that preceded her in the franchise’s 1937, 1954 and 1976 chapters) is catapulted in the spotlight after a chance encounter with a fading star (Cooper’s Jackson Maine). Much has been written about the freshness of Cooper’s directorial debut and Gaga’s riveting performance, but do not let Corbet’s second feature slip past you. It’d be tempting to write off Vox Lux as A Star is Born’s darker cousin, but I fear this would fail to encapsulate it in all its complexities. A bilious portrait of a bulimic society high on short-term thrills, success, and dangerously numb to violence, Vox Lux is a far cry from a sanitized rags-to-riches parable; more than watching a star being born, this is an entrancing portrait of a star being made, with all the excesses and neuroses of the society she crystallizes. – Leonardo G.

The Rider and Lean on Pete

Equestrian enthusiasts were served a stable of riches at the cinema this year with Zama, Western, Damsel, The Ballad of Buster Scruggs, The Sisters Brother, (though not The Mule), and a pair of the best in this regard: The Rider and Lean on Pete. With both films galloping deep into the world of midwestern horse racing, they provided profoundly heartfelt portraits of the economic realities of today’s America and, at the center of each, a mutual connection between wayward souls. – Jordan R.

24 Frames and The Other Side of the Wind

The swan songs of a pair of cinema’s greatest directors arrived this year, one in a more completed form when the director passed and another less so. However in both each gazed into the future of the medium and pushed boundaries in thrillingly divergent way. Through a number of techniques, Abbas Kiarostami’s 24 Frames questions and plays with the very foundations of what we perceive filmmaking to be, all while delivering a chilling view of his final cinematic breaths. In The Other Side of the Wind, Orson Welles imagines a future of filmmaking as a barrage of cameras with off-the-cuff filmmaking, i.e. what passes for most television these days, not to mention the kinetic speed in which most blockbusters are patched together. For a triple feature, follow Welles’ film with another look at resurrecting an unfinished film, also on Netflix, with Shirkers. – Jordan R.

This year gave us not one but two viscerally exciting portraits of genuinely stunning athletic performances by egomaniacal assholes with a death wishes; Mission: Impossible – Fallout, featuring long stretches of a millionaire action star briefly touching death in slick, crystal clear photography for our entertainment; and Free Solo, featuring the first climber to ever ascend Yosemite National Park’s El Capitan without the safety of a rope. The upper hand in this comparison must go to Tom Cruise on this one, his clear commitment to sacrificing his body trying to bring the American action blockbuster into the realm of eastern martial arts athleticism and cartoonishly insane, Rube-Goldberg-machine setpieces is a noble one that activated a raw, lizard brain desire in 2018 audiences to see (and truly see) something amazing when most blockbusters are deploying some photoreal animation calling it a day. As documented in Free Solo, however, Alex risks his life purely out of a selfish, abstract desire for personal stimulation which, though still technically amazing to watch, leaves a bit ickier of a sensation as you watch him hurt the people around him on his quest for some sort of vague transcendence. – Josh L.

Showing the power of a specific perspective, Wildlife and Summer 1993 are coming of age stories that rest firmly in the eyes of young protagonists and the shifting bonds of those around them, the repercussions of which won’t be felt for years. In Wildlife, Ed Oxenbould’s Joe must grapple with a father who has left and a mother who is enjoying newfound freedom. In Summer 1993, Laia Artigas’ Frida reckons with the trauma of her mother’s recent death, culminating in one of the best final scenes of the year. Both films, while also being period pieces less about the production design and more about the societal norms of the era, also show with the restraint the emotions that can build in these young characters, the effects of which they aren’t able to fully express. – Jordan R.

One of the few double features on this list where the order on this list is the order that they should be viewed, Tamara Jenkins’ Private Life and Valérie Massadian’s Milla take different approaches to parenthood, both formally and thematically. The former is an astutely-written look at the struggles to have a child, while the other is a distinctly-realized window into single motherhood–and both are filled with raw humanity. Make it a triple feature with Tully, though perhaps not if you are planning on bringing a child into this world anytime soon. – Jordan R.

Did You Ever Wonder Who Fired the Gun? and Bisbee ‘17

History comes into more focus the further we get from it, but it doesn’t make it any less personal, especially in regards to these two documentaries. In Did You Ever Wonder Who Fired the Gun?, filmmaker Travis Wilkerson confronts his dark past as his great-grandfather murdered a black man in 1946 and got away with the crime. In Bisbee ’17, Robert Greene enters an Arizona town on the 100th anniversary of a horrific event in which 2,000 migrant workers were rounded up and left to die in the desert. Through ingenious technical construction, both films advance the language of the documentary form while proving that the best way to begin a healing process is not willful ignorance, but painful reconciliation. – Jordan R.

Life online in 2018 is already scary enough as is, so it seems quite the challenge for a film to invoke horror using the internet without taking too many creative liberties or appearing just plain silly in the eyes of the savvy. Unfriended: Dark Web, a computer desktop horror sequel-in-name-only, and Cam, a surreal psychological character study, exemplify some of the genuine fears the digital age can manifest, whether it’s accidentally crossing paths with a criminal agent from the web’s deepest, darkest recesses or gradually succumbing to the constant pressure of parasocial interactions. Despite their drastic differences in formal presentation, both films dissect the existential dread of being extremely online—too online—to the point where one’s sense of self starts to decay, truly vulnerable to the worst of the web’s onlookers as the boundaries between what’s real and what’s only virtual begin to break down. – Kyle P.

The Mule and The Old Man & the Gun

This fall brought a double bill of octogenarian crime dramas that provided ideal swan songs for their stars (so far, only one has hinted at their retirement, however), managing to encapsulate their respective entire careers in the span of a few hours. Clint Eastwood’s The Mule and David Lowery’s Robert Redford-led The Old Man & the Gun are both breezy escapades with a tender humanity that sneaks up to envelop one by the final moments. We certainly hope it isn’t the last time either of these stars appear on screen, but we also couldn’t think of more fitting send-offs then these two genteel odes to enjoying the moment, no matter what age you are. – Jordan R.

The Ballad of Buster Scruggs and Damsel (and Western)

Since the dawn of cinema, the western has stood as an iconic landscape for young filmmakers and 2018 brought us three uniquely different post-modern genre entries. While Joel and Ethan Coen’s The Ballad of Buster Scruggs relies on traditional western tropes to examine certain archetypes, David and Nathan Zellner’s Damsel leans more into the revisionist camp with its exploration of gender dynamics. Meanwhile, both films play with preconceived notions of how a western unfolds, much like Valeska Grisebach’s enigmatic and haunting film, which boldly stakes its genre claim with its title. Grisebach’s Western depicts a modern setting and conflict, where the worst aspects of masculinity inspire culture clash and working-class frustration amidst a German construction team working in Bulgaria. – Tony H.