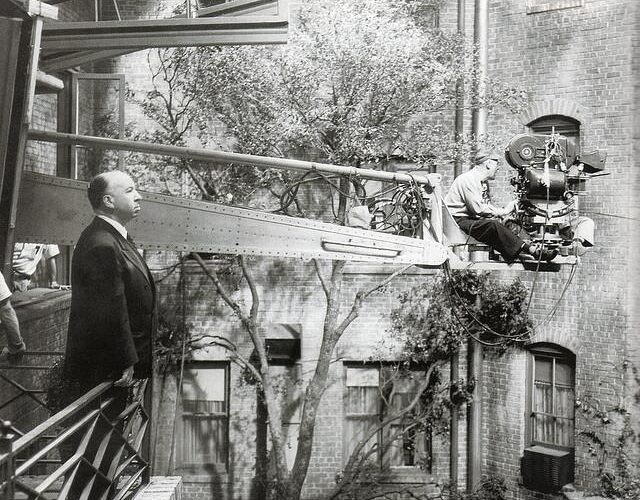 Above, Alfred Hitchcock on the set of Rear Window.

Watch a 1-hour and 17-minute conversation with Walter Murch from 2011.

Watch a documentary on the making of 2001: A Space Odyssey, released two years before it hit theaters. [Open Culture]

Federico Fellini during the auditions of La Dolce Vita in Rome in 1959. Watch a behind-the-scenes video on David Cronenberg‘s TIFF exhibition, which is now open.

Watch an excerpt from the restored version of Werner Herzog‘s Aguirre, Wrath of God.

Charlie Chaplin & Sir Winston Churchill on the set of City Lights and video of Chaplin directing. Production still from the lost “alternate” ending to Double Indemnity, showing Fred MacMurray entering the gas chamber while Edward G. Robinson stands by as a sorrowful witness. This ending was cut from the final release. Wilder thought it was unnecessary, and the Hayes Office thought it was too gruesome. [Sales on Film] A batch of photos of Andrei Tarkovsky directing Stalker. Watch the 25th anniversary trailer for a restored version of Cinema Paradiso, which will be re-released theatrically and on Blu-ray in the UK.

Joseph Cotten and Orson Welles on the set of The Third Man. The re-release poster for Abel Ferrara‘s Ms. 45. [The Dissolve] Stanley Kubrick on the set of Eyes Wide Shut. Watch a documentary on Luis Buñuel‘s Viridiana. [The Seventh Art]

Martin Scorsese directing the opening scene of Alice Doesn’t Live Here Anymore, designed to pay homage to King Vidor’s Duel in the Sun (1946) and Victor Fleming’s The Wizard of Oz (1939). A glimpse of Federico Fellini‘s 8 1/2 in color.