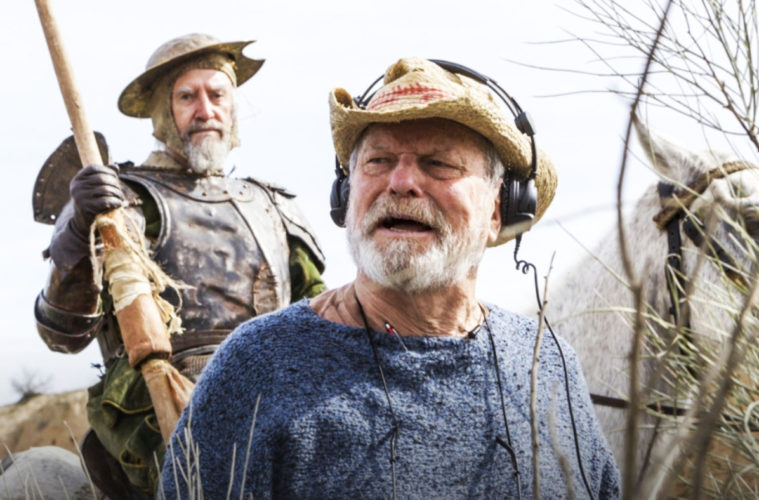 Terry Gilliam wonders if The Man Who Killed Don Quixote can live up to its larger than life production trouble. The trouble is due to the insecurities Quixote faced being an independent production, but that independence is also how Gilliam’s kept the project alive long after a studio would have scrapped it.

The movie’s storied production history is well-documented, including Amazon’s last-minute decision to pull out of the project when producer Paulo Branco claimed rights to the film, which nearly derailed their 2018 premiere at the Cannes Film Festival.

In our conversation with Gilliam we discuss how Jonathan Pryce’s Don Quixote built his own ramshackle armor, how directing is like being “an ignorant peasant who knows no better,” and his feelings about Fathom Event’s one-night-only screening strategy.

The Film Stage: I found Quixote’s costume so beautiful. It looks like a leftover costume from the movie within a movie, or he made it out of trash. Will you talk about its design?

Terry Gilliam: The idea was Quixote bumbling around this place and finding bits or armor he assembled. That costume is the costume Jean Rochefort wore in the original version in 2000, and what was interesting is that we started work with Jonathan Pryce on the costume and it wasn’t working. We didn’t have the money in the budget, there’s no way we could make something as good as what was on screen. Nicola Pecorini was on the phone with Gabriella Pescucci who designed the original costume, who was about to do an opera in Italy and pulled that costume out to see if they could use it in the opera. The timing was designed by some deity, I’m not sure which one. And we said, wait, could we have it for the film? Gabriella said yes to us and we got it. Luckily it fit Jonathan, so there was no way we could not use it. The amount of work that’s involved in making what you see, you can’t afford to do that now unless you have a much bigger budget. It just requires a lot of work.

You’ve worked with Jonathan Pryce for as long as you’ve been trying to make this movie. At any point, besides the last few years, was Jonathan considered to play Don Quixote?

Well he wanted to, he always asked when we were going to do this film. I was always stalling because I felt Jonathan wasn’t old enough. He became 70 years old, magically just in time. I guess Jonathan should thank Michael Palin because he was the Quixote prior to Jonathan’s version. But he got tired of waiting through all the nonsense we were going through with a producer for a brief while. Michael said, “I can’t deal with this man anymore.” He left and Jonathan was waiting in the wings.

Much of the film is about how Toby’s (Adam Driver) student film changed the village where he shot it. There’s a line Quixote says about Sancho (note: Quixote thinks Driver’s Toby is Sancho Panza): “He’s an ignorant peasant who knows no better.” Is Toby’s effect on the village an isolated story or are you saying something about the nature of filmmaking?

Films are dangerous things and they have to be dealt with carefully. When we made Monty Python and the Holy Grail, we were in a little village in the Highlands. All of us came pouring up from London, the whole film unit; film units are very exotic, I suppose. It’s basically like vikings raping and pillaging across a landscape. When we returned to London there were so many marriages broken up. So many people followed us down to London in hopes of getting into films. They probably never did, or some did, we don’t know. That’s the effect you have on the community on a film. On the other hand, it’s about what film can make and the power of cinema to the public. It’s about taking responsibility for the stories you tell. Toby is caught in a situation where lives had been shattered, destroyed, changed. He has a sense of guilt, which is the beginning of his becoming a decent human being. [Laughs.]

As a filmmaker, what does it take for you to justify the potential harm your work could do to a community?

I suppose all I try to do is make people look at the world differently. I’m not trying to tell people what they should or shouldn’t think. I’m just offering alternatives, different windows to look through. I always try be reasonably responsible with what I talk about in our films, about reality or a version of reality. Maybe it’s useful to an audience, I don’t know. Doing something like doing a big waltz in Grand Central Station where people fall in love and then you discover subsequently some years later that on New Year’s Eve people would waltz in Grand Central Station. It’s nice to know you can make the world better. Maybe not better, but more enjoyable.

Are you ever worried the making of The Man Who Killed Don Quixote overshadows the movie itself?

What’s always worried me was people’s expectations. They’re waiting and they’re waiting and they’re reading about more things going on. I always worry about people’s expectations being greater or more interesting than the actual film we were able to make. I think that some of the press are spending an awful lot of time trying to discuss the history of the film and how that affected what the film is. I don’t think that way. Yes, we made changes along the way, but we weren’t trying to comment on the history of the film at all. We made the script more interesting over time, but when you go into shooting, this movie only came into existence two years ago, once you start shooting. And that is what the film is. What you are able to achieve in the time behind the camera. It’s not exactly the film I set out to shoot, it changes along the way. A film is an organic creature, at least in my way of making them. Sometimes what comes out is surprisingly different from what you set out to do.

I know you could never compare the final movie to what you initially planned, but is there anything about the final movie that made you glad you were only able to film it two years ago and not twenty years ago?

I think it’s much better. I think the script and the idea of what we we’re doing is far more interesting than what we were doing then. Because back then is was more A Connecticut Yankee In King Arthur’s Court situation, with a modern guy being bumped on the head and ending up in the 17th century. These were moments where I feel like the film was making itself or was busy waiting for the right cast turned up. I think Adam and Jonathan, with all the actors I worked with along the way, they both brought something new and different from what I think I was doing earlier. It’s much funnier, more touching. I think Adam and Jonathan make a wonderful double act, it was constantly surprising.

Did you have a visual basis for the film within a film?

Visually I wanted it in black and white and use wide angle lenses like I used too. [Laughs.] In the main story I’m not using wide angles in my normal way. I didn’t know exactly what the film within a film was until we shot it. I just had a few little scenes in my head.

Is there a complete version of the film within a film?

No, we never wrote it! [Laughs.] We only wrote a couple moments. What we did in the student film, in our previous scripts we never had a way of creating a good Dulcinea and Angelica (Joana Ribeiro) becomes Dulcinea in the movie. The idea that you got a fifteen-year-old girl, who’s sweet and innocent and full of life, but because she’s in a movie, because a young director says you’ll be a star, her life gets turned upside down. Angelica winds up as an escort. She finally winds up finding a rich guy who might be bastard, but he’s providing her with all the things Toby put into her head what success should be like. She just happens to be a kept woman and she’s treated rather badly. It makes her a good Dulcinea and let’s Toby rescue her from the fate he effectively triggered.

What do you think of Fathom Event’s release strategy of putting the film in 700 theaters for one night? Except for that Peter Jackson’s They Shall Not Grow Old, I’ve never seen such a high profile movie being released for one night.

You don’t always get what you want. [Laughs.]

For a variety of reasons, this winded up being the way the film is released. I wasn’t able to have much influence in that because I’m not a producer on the film. I don’t know, we’ll see how it works. I talked to other people, and this may be the blueprint for what films are going to be in the future. I mean, small independent films. We are an independent film. It didn’t help that Amazon pulled out after we shot the movie because of legal problems with a former producer. It left us rather vulnerable and this is the result. But I hope it works. Independent films are never going have the kind of money to compete with studio movies. By focusing it on one night, hopefully the fans will see it on the big screen, and if it does well hopefully other cinemas will be picking it up later. It’s one way to get attention. I’ve always known that more people see my films on DVD than they do in the cinema. But I make movies for the big screen and I hope this allows those who really want to experience what it’s like on the big screen and with the audience.

The Man Who Killed Don Quixote plays tonight nationwide and expands on April 19.