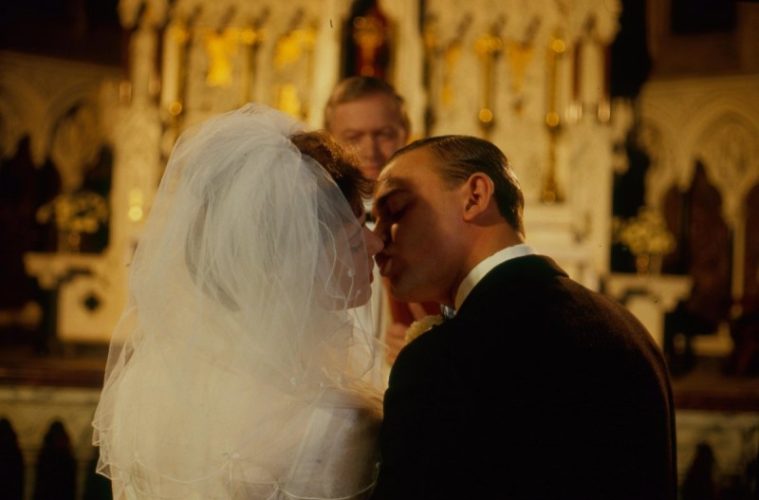 Terence Davies’ debut feature film Distant Voices, Still Lives premiered to universal acclaim in 1988. His singular vision of domestic life in 1950s Liverpool was followed by seven features, with two more on the way. The BFI marks the thirtieth anniversary of Distant Voices with a new restoration, now playing in the U.K. and at Metrograph in Manhattan, followed by a Blu-ray release via Arrow Academy in October. We spoke with the director about why audiences love his work, communal life as depicted in his earliest projects, and two films he hopes to complete by the decade’s end.

What do you think about the film thirty years later?

Terence Davies: I was very touched someone in America wanted to release it. It was a lovely surprise. I can’t believe it, thirty years have gone by. My God. [Laughs.] Where has it gone? I never watch it, you see, because I made it. It’s just very odd. I just think, to be honest with you, what do people see in it? [Laughs.] I culled my family history together and made it into a cinematic narrative. I never thought it would go beyond England–I just didn’t. The fact people can respond to it in other countries is still a bit of a wonder for me I’m afraid.

Do you have any theories about why audiences and critics respond to your work so positively?

God, not at all! Absolutely not. I don’t know what they see in it. It’s people beating each other up and then singing. It’s not foot-tapping, is it? I’m proud that I celebrated what that culture was like in the 1950s, and it was rich even though we had no money. We were living in Liverpool slums, but the richness of life seemed wonderful. You know, people getting together, people sing together. They don’t do that now. But it was so life-affirming. That’s what I loved about it.

Will you talk more about the intimacy of your characters singing together?

That was just direct autobiography. The sort of ritual was—and life was very ritualistic in that period because people did certain things on certain days—you went to the pub on Saturday, you came back, you brought some beer back, you had a dance, played some records, and had a sing-song. People knew the group songs and the individual songs. One of my neighbors always used to sing “Ghost Riders in the Sky”! [Laughs.] They were quite extraordinary and you can’t forget those things because they seem so rich–even now they seem so rich. And it was a sort of given, a wonderful feeling of… camaraderie doesn’t really describe it, but a feeling of being one with each other.

How did everyone know these pop and traditional songs?

Some of the songs mum sang when she was a young woman. But also what happened in those days when you bought 78s you had the lyrics on the back of the sleeve and that’s how you learned. Sometimes, if you couldn’t get the record, you would listen to the songs and write it down and then you would learn, but that was common and it was just part of the culture of our period. Pop songs in those days were meant to be sung by other people and you must remember that the Great American Songbook was the poetry for ordinary people. In 1956 Cole Porter was still alive. So when someone like Stephen Sondheim dies, the book will close on that Great American Songbook because there’s no one to fulfill his place anymore. There’s no one of that caliber and stature. These were songs that people loved but they also were the poetry for ordinary people. One of my brothers, who is now dead, I always think of him when I hear “Send in the Clowns.” He was just an ordinary working class man but he loved that and it is a great song. I mean it is a truly great song. That became part of the fabric of how you felt about the world and yourself. But that wasn’t conscious, none of that was conscious, it was felt. It was visceral and it was felt.

What was your experience screening the film at the 26th New York Film Festival?

Unfortunately, they got the reels mixed up. It’s not a linear narrative so to get the reels in the wrong order made it incomprehensible. [Laughs.] I don’t think it was deliberate but that’s what happened. I was terrified. That was the first time I’d been to America and when I was growing up that was very much the land of magic, and it really was! Steamers would bring back records from America and one of my sister’s friends brought back a copy of Sammy Davis Jr. singing “That Old Black Magic.” The record went around the whole street because it was the only American record we actually had.

How did you decide to make the narrative non-linear?

When I was growing up my family would talk about my father because he was very, very violent. I heard the stories piecemeal, if you like. When I was writing it I just knew I had to follow that strain of the way in which those stories were told. I didn’t realize it was non-linear because I had only made a trilogy, which was my apprentice work and I was still very much a learning. Like everything else, I wrote it as I felt it. One of the great influences has been and always will be “Four Quartets” by T.S. Eliot, which is also about the nature of memory.

Memory isn’t linear–it’s cyclical. And I felt rather than knew it and I just followed that. We shot it and when we were putting it together on the cutter that was the template: what prompts another memory? It’s like dropping a pebble in a pond and all the ripples are memories. They’re all different so it’s just a question really of trying to be true to how memory works. I didn’t know that I was doing that at the time. It’s only in hindsight that I knew that but it was something that I felt rather than knew.

How did you achieve the film’s rich brown hue?

Humphry’s Laboratory would take the silver oxide out of the film and then you could alter it with filters when you shoot it. I wasn’t the first to use it. Michael Radford did for “1984,” but the bias there was for blues, reds and deep greys. I didn’t want that look, I wanted it to be on the spectrum of brown and that can go from anything to pink to really dark brown. So we just did some tests and warmed up the image with coral filters just to give it that warmth. That’s how I remember our house being. In fact, when we were constructing the set they found this wallpaper and it was little roses against a sort of grey background. That was exactly the paper we had our parlor, which was incredible to walk in a room to see what it was like when I was a kid. But that was how we achieved the look. The BFI did a new digital restoration and they did a wonderful job. There were only two places where I asked if they could make it a little darker or lighter. It really looks lovely, if I do say so myself.

Are you working on any upcoming projects?

Yes, I am! I’ve written two scripts and trying to get money for them. One is about Siegfried Sassoon, who was one of the great World War I poets from England. Another one based on a lovely American novel called “Mother of Sorrows” by Richard McCann. We’re hoping to have those made in the next two years.

I hope so. Fingers crossed!

Distant Voices, Still Lives is now playing at NYC’s Metrograph and in the UK, followed by a Blu-ray release on October 23 via Arrow Academy.