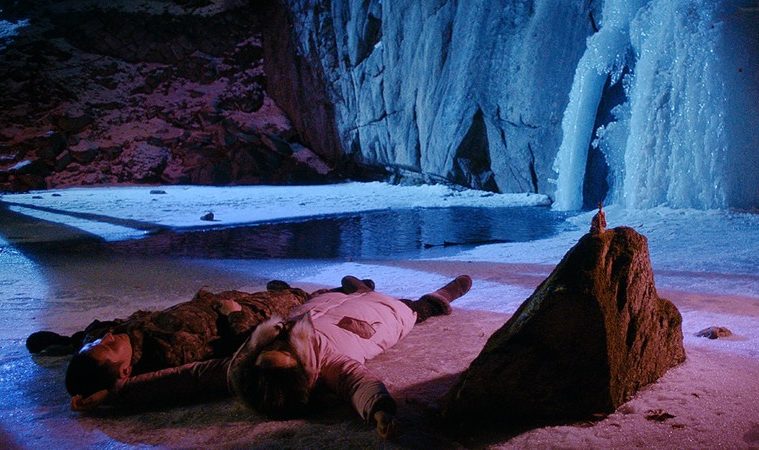 A halo of unnatural, blue, and red neon-light envelops the snowy landscape around the Buddhist temple of Cheongpyeongsa. Wide awake in the dead of night–silent guests of a bed and breakfast a short walk away–is a Seoul couple in their fifties: Eun-ju (Seo Young-hwa) and Heung-ju (Yang Heung-ju). It’s a trip down memory lane; some thirty years prior, the wintry landscape was home to their first impromptu rendezvous, but the flirting that presumably peppered the first date is very much a relic from a bygone era–more than a couple enjoying a holiday together, the pair look busy mourning a protracted, funereal goodbye. A talk-filled chamber drama marooned between moments of inexpressible loneliness and scenes of whimsical beauty, Jang Woo-Jin’s Winter’s Night is a delicate and charming portrait of a middle-aged couple at a sentimental standstill–a midwinter’s night dream unfurling through labyrinthine late-night strolls and chance encounters.

A few minutes and an ambitious backwards car tracking shot into Jang’s third feature, Eun-ju and Heung-ju are on a cab on their way to catch the ferry home when she realizes she’s mislaid her mobile phone. Grudgingly, he agrees to help her retrace their steps and look for it at the temple–but by the time the couple races back to the mountain, the site is closed. Stranded in a quiet, snow-covered village with no ferry scheduled until the morning after, the two decide to spend the night at a local B&B, where–a dinner and several soju shots later–the conversation reaches a dramatic heart to heart. Eun-ju’s frantic reaction at the phone’s disappearance belies a much larger and deep-seated malaise–a sense of claustrophobia vis-à-vis a relationship over which she has very little control, and a man she seems to have lost interest in. “Aren’t you bored of me?” he asks, jokingly, the bedroom’s radiator sizzling quietly next to them. “I’m bored out of my mind,” she shrugs. “You’re no fun.”

It’s a pivotal juncture that sets the couple’s late-night meandering in motion. Perturbed by his wife’s confession and unable to catch sleep, Heung-ju leaves the B&B to resume his soju-fueled bender. Bellowing romantic songs to a deserted karaoke bar, he bumps into an old fling, who tags along and lets him flirt only to disappear into the night just as swiftly as she’d showed up. Meanwhile, Eun-ju too takes to the mountains, temple-bound, and though the search for her mobile proves fruitless, the stroll introduces her to a few other nocturnal souls – a placid monk who helps her look around the temple, and a much younger couple (Lee Sang-hee and Woo Jihyeon), whose still embryonic romance echoes what Heung-ju and Eun-ju’s must have looked like a few decades prior.

Dialogue-driven and slow-paced, Winter’s Night unfurls as a night-long stream of consciousness zig-zagging in between beguilingly ordinary conversations and small gestures. Very little happens all throughout its 98 minutes–save for a brief moment of tension involving Eun-ju and an ice-covered waterfall, the story is resolutely low-stakes, and plot points are scarce: late night wanderers meet, chat, then resume their peregrinations. But this is a film of subtle, devastating observations, which demands one’s undivided attention to detonate. There is a whole movie in a brief exchange between Eun-ju and a monk, when she confesses the phone she’s lost “is all [she] has,” and, to his puzzled “you can buy another one,” she replies “it still wouldn’t be mine.”

Pots and pans simmer at all times of the night, faint lights beckon from deserted restaurants, and the wind howls in the distance, so eerie Heung-ju mistakes it for the cry of a desperate woman. Time, in Jang’s static shots and gentle panning, is an elastic continuum that offers few references, and there is a curious, Bunuel-like circularity in the couple’s strolls–a claustrophobic loop which makes it unclear whether or not the wandering will ever come to an end, and which Jang accentuates by having characters literally walking into the others’ snow footprints. It’s a feeling that elevates the drama onto a dream-like dimension, raising questions as to whether Eun-ju and Heung-ju’s fellow insomniacs are real people, or figments of the couple’s imagination.

Hong Sang-soo’s aficionados will recognize familiar tropes here, from the ungodly amounts of soju chugged throughout the night to the intimate and loquacious dinner table chats–not to mention a few familiar faces, in primis Seo Young-hwa herself, of On the Beach at Night Alone fame. But the magical realism that springs out of Winter’s Night is Jang’s own making. Trapped in a snow-covered, still world Yang Jeonghoon’s cinematography paints with mesmeric neon-lit hues, Eun-ju and Heung-ju walk through a near extra-terrestrial landscape, where time seems to have relinquished its sway–haunted by the relics of their long-lost love, and born back ceaselessly into it.