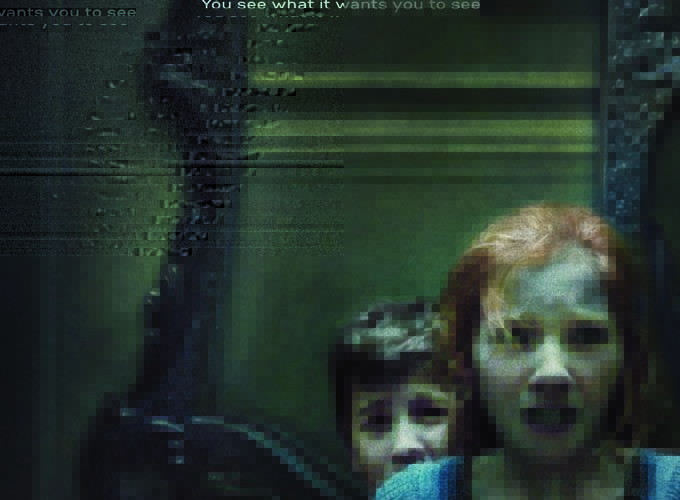 We all know the game in a horror film these days. Something evil is going to prey on our protagonists and likely try to scare the crap out of us in the process. But it’s not often that the protagonists also know the score and what to do to keep from being overtaken. That’s what Oculus is all about: fighting back against a known evil to the best of your abilities. Karen Gillan‘s Kaylie shines here as the woman that has it out for a magic mirror (stay with me here) that has been wreaking havoc on its owners for centuries. She does plenty of research and seems to have been preparing for the last 11 years when her brother Tim (Brenton Thwaites) is finally released from a mental hospital and she asks for his assistance. What she gets is a surprise, as he was once tormented by what happened, but has been through so many psychological evaluations that he is a disbeliever of the clear evil in the same house.

You see, Tim and Kaylie are back at the scene of the crime that put him away in the first place. They’re all alone and Kaylie has used her considerable wealth after their parents’ untimely deaths to plan her approach to destroying the evil mirror once and for all. Some of the setup is a bit stilted, but once she gets into her actual plan, things quickly become much more interesting. We find out the mirror has the ability to affect people within a certain radius, but not everything in this thriller is as it appears. Director Mike Flanagan smartly uses a script by Jeff Howard that has the flashbacks of the original crimes 11 years prior, smash-cutting into the current timeline. We will flash to current Tim looking at a location in the house and seeing the much younger Kaylie going through her day there. This serves a dual purpose of keeping the audience off guard by never knowing if some of the terrors they see are current or in the past, but also informing us about what happened without having to wade through loads of exposition. The film also plays with reality by showing us the point of view of Kaylie and Tim as they attempt to keep from being manipulated by the mirror. They have timers to remind them to eat, to drink water, and to stay in touch with the outside world. But this wouldn’t be a horror film if things went as planned by our heroes, and the events slowly start to turn. The film does a great job of placing our viewpoint behind Kaylie being the sane one and Tim being unreliable — the guy just got released from a mental hospital, after all. But while Kaylie has been stewing in her determination to track down the mirror and destroy it, he hasn’t, and comes at the experience as if Kaylie might be a bit out of sorts. This forces her to fight two battles at once and Gillan effectively shows the stress well. When she starts to crack we feel for her having to defend herself from several angles.

As we move through the narrative, the backstory of the mirror is revealed and we begin to understand the way it manipulates its victims and what happened here. The film rarely relents because it plays with the dual storylines, so the tension just keeps building as layers of new knowledge, for both the characters and the audience, are acquired. Haunted house horror films aren’t easy to accomplish, at least in an effective manner, but yet again, SXSW this year has shown that with a small budget and a single location there are still interesting stories to tell that use the subgenre’s trappings. Kaylie is the believer that has all the tools of modern science at her disposal; she’s prepared and focused. That’s why it’s such a trip to see her put through hell and back in Oculus.

Oculus screened at SXSW 2014 and opens on April 11th. Watch the trailer here.