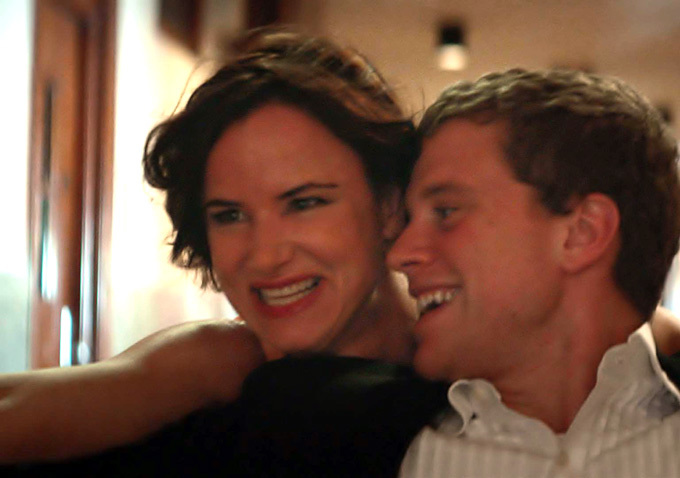 Kelly & Cal follows well-worn territory and manages to make things feel fresh. That’s largely due to the two impressive leads in Juliette Lewis and Johnny Weston, but the way it wraps up proves that a good beginning and middle can’t keep a film from tottering over the edge into something downright disheveled. The film revolves around this idea of uncertainty in life; the unexpected thrills, sadness, terrors, and suck that life can bring you. Motherhood, and parenthood as a whole, can provide all of these things in equal measure, and somehow, this film manages to do just the same.

Kelly (Lewis) is a former punk rocker that has settled down with her hard-working husband Josh (Josh Hopkins) in a quiet, idyllic suburban neighborhood. With a newborn child, she’s forced to stay inside looking longingly out of her home. She has few local friends and struggles to find her own place in this world that is suddenly dominated by her newborn. She’s going through all the typical modern housewife motions: no one notices her anymore, let alone her husband—they have an argument about having sex nearly 10 minutes into the film— and she has hardly any free time when the baby isn’t whining or wanting to be fed. Indeed, life as a stay-at-home mother isn’t easy and there are no punches pulled in this regard.

When on the briefest of breaks in the backyard, sneaking a cigarette, her neighbor Cal (Weston) introduces himself by informing her she has “great tits.” It’s the kind of line that should give anyone fair warning that this kid is a loose cannon and she rightfully tells him off. That’s when we find out he’s wheelchair bound, a result of a recent accident. Naturally, she feels bad, and with her husband laughing at that notion, the two end up running into each other again and strike up an unlikely friendship. To cut to the chase, there’s a fair amount of sexual tension in the film as Cal and Kelly get close — uncomfortably so at times, considering he’s a graduating high school senior. They also see in each other something that no one else around them can: that they have more to offer to the world than two defining factors, being a mother and handicapped, respectively.

Directed by Jen McGowan from a script by Amy Lowe Starbin, there is a confidence from the outset. Cal is cocky and the kind of kid you’d expect to cut up in the back of the class and not take a lot of things seriously. He’s self-destructive now that he simply can’t wrap his head around his new impairment, and insufferably honest at times, blabbing his mouth when he’s so close to getting what he wants. In Kelly he sees a former wild-child that has been caged up. He tries to release her in many ways, and succeeds in getting her to loosen up and be more adventurous. By this point, mother-in-law Bev (Cybill Shepherd) and sister-in-law Janice (Margaret Colin) have stepped in to help with motherly duties.

How do we define ourselves? As a mother? As a father? Handicapped? Normal? We go through life being categorized by the way we dress, where we’re from, the way we talk, what music we like, and many other external, initial factors. But is that what defines us? In many ways, Kelly is a mother and can’t escape that fact. She’s not having the easiest of times with it. The same can be said of Cal, who is angry at the world these days and is having trouble finding a way to define himself beyond his handicap. It’s encompassing and has changed his whole world. I won’t try to directly compare having a child to becoming handicapped and being forced to use a wheelchair, but it changes the world you live in in dramatically similar ways.

There’s also a raw honesty here; the characters aren’t perfect and end up making a lot of mistakes that have actual consequences — particularly Kelly, who seems to make mistakes over and over again. She’s young and smart enough to know better, but clearly gives into her desires more than anything. I’m not looking for a happy ending here, but the way Kelly starts to shrivel up as a decision-maker is quite extraordinary. It’s the kind of change that makes you feel anguish and pain for the decisions she makes during the film but makes you simply angry after that she made them at all. Kelly & Cal takes a lot of goodwill that it builds up and tries to spurn it all away; if it weren’t buoyed by tremendous performances, I’d likely have found the entire experience void of redemption.