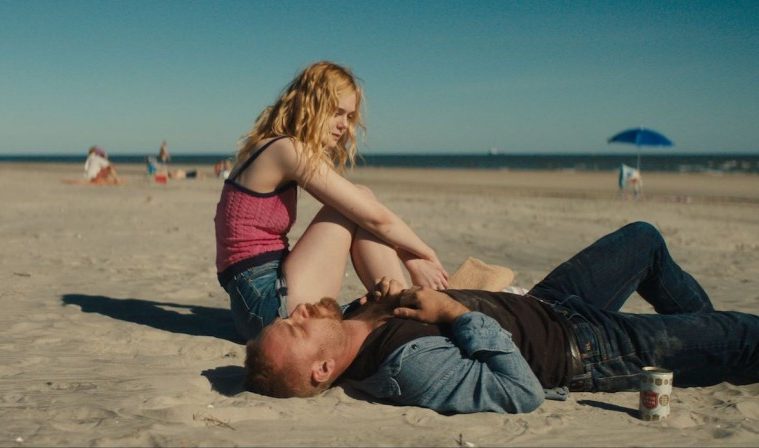 Adapted from the novel by Nic Pizzolatto, the fourth feature from Mélanie Laurent, Galveston, focuses on perhaps the least interesting part of its narrative, closing on a scene that would have made for a better beginning of a movie than the beautifully lensed but derivative road movie it ends up being.

Opening in New Orleans in 1988, Ben Foster stars as Roy, an ex-con/hitman working for Stan (Beau Bridges), a powerful boss who sends him out to do a job that ultimately falls apart in a graphic shootout. In the aftermath of the shootout, Roy finds Raquel (Elle Fanning), a call girl left in the house. Now a wanted man after the job went sideways, Roy and Raquel go on the run.

Heading south, they make a pit stop to save Tiffany, Raquel’s three-year-old sister, who lives with their father. Initially, Roy, a straight shooter living on borrowed time–for both health and professional reasons–resists Raquel, repulsed by her life choices. He’s simply a good Samaritan. But the trio soon end up settling down in sleepy Galveston, setting up camp in a motor lodge off the interstate where they become part of the community. Stealing documents that more or less feel like a hollow MacGuffin for bringing down Stan, Roy plots his next move while Raquel sees clients in her room to the annoyance of the local manager (C.K McFarland).

Adapted and directed by Laurent as her English-language debut, something feels a bit off or perhaps lost in translation as the film shifts from dreamy landscapes and parting glances to ultraviolent single-take scenes that jar us out of the seductive fantasy. The director, who proved more than adept behind the camera with Breathe, doesn’t seem terribly in control of tone or plot here with an uneven structure that grows maddening in its second act before becoming a revenge thriller with predictable beats. Galveston looks and feels like a retread of moments borrowed from far better pictures, touching on familiar notes along the way, from Raquel’s red dress to Stan’s expository dialogue explaining everything that’s happening.

Foster and Fanning are predictably great together, cut from the same bayou cloth, both doing what they must to get by, but the script gives them too little to work from. Instead, there’s only enough material for a few touching, if not heavy-handed moments along the way. As the film’s closing scenes abruptly sum up what has occurred–in a way that could have stood alone as a quietly moving film, separate from the rest of its sloppily assembled piece–it becomes clear that Galveston doesn’t earn the cumulative emotional effect this journey has been building towards.

Galveston premiered at SXSW 2018 and opens on October 19.