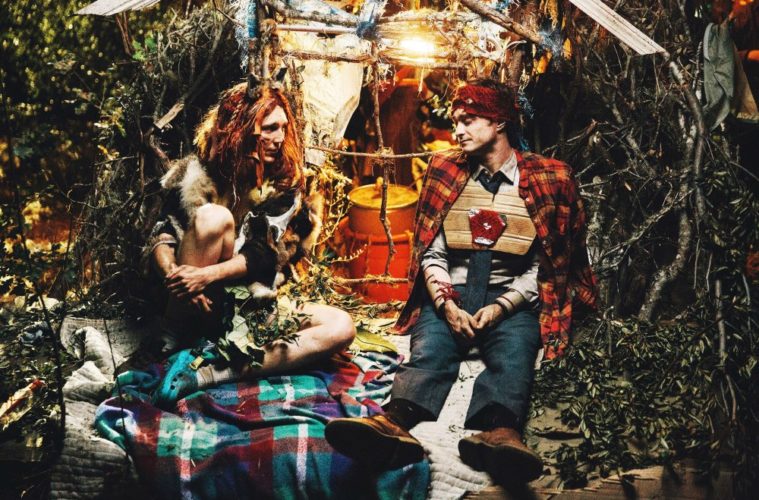 It would not be unfair to call Swiss Army Man “the movie about the farting corpse with the boner,” because that is the perfect description of Manny (Daniel Radcliffe), one of its two lead characters (the other is love-torn Hank played by Paul Dano). What would be unfair is to only call it that, because it’s actually one of the most unexpectedly sensitive films of 2016.

As directed by the Daniels (Kwan and Scheinert) the film combines the best of buddy films, mumblecore aesthetics and unexpected romance to become something that defies genre and what’s politically correct on film. Needless to say so, it’s a delightful surprise and perfect counter-programming for a season so marked by how alike everything looks. Whether you like the film or not, the true thing is that you won’t be able to get it out of your mind for quite some time.

The Daniels first gained notoriety with their music videos, particularly DJ Snake and Lil Jon’s “Turn Down for What” which featured yet another prominent penis attempting to free itself. If describing their work makes them sound like teenagers who happened to make it big, it’s not only important to deny that notion, but also to avoid making joyless interpretations of their oeuvre. Strangely enough they have mastered the balance between work that feels silly and playful, without ever disengaging from the intellect. The massive conference table where the three of us sat to talk about Swiss Army Man was the perfect setting, since it served a slice of great film talk with a pinch of poetic irony.

How do you go and pitch a movie about boners and farts?

Dan Kwan: It’s really odd. Normally it’d be impossible to even talk about it without people deciding they didn’t want to talk to you anymore, but we did so much experimenting with our short films and music videos that people started to trust us. The more people saw our work, the more they knew we had crazy ideas that sometimes worked. It’s basically all about having something to show. The first years doing music videos we pitched things and got a lot of no’s, because on paper they just seemed like bad ideas. We’re attracted to those in a way, because we like to prove people wrong. If your gut reaction is “this is a terrible idea, it’ll never be worth anything.” we will build that idea into something beautiful and prove them wrong.

Daniel Scheinert: Almost every film is like a little project.

Dan Kwan: We want to make things people can connect to — the ultimate goal is to make something someone will connect to emotionally.

Daniel Scheinert: Also, this movie was the most fun thing to pitch. I don’t know how people pitch boring movies. You have to pitch to people so many times. I never got bored of pitching this to people. Even when they said no, at lunch they would probably still talk about it.

I shouldn’t be dissing other movies…

….in that case, let me say that I wish this movie was like I wish The Revenant had been like.

They’re both survival movies, but Leo needed more boners. But also there’s a very special element to this one and it’s that it explores something quite prevalent in your work which is the special bond between men. Other than you being guys, what makes you so fascinated with exploring the way men bond onscreen? I really wasn’t expecting to be so moved by this film.

Daniel Kwan: Because we are two guys and a directing duo, we do come up with ideas related to our personal experience, but at the same time I find myself kinda self conscious when it feels we’re making something with familiar tropes. So we compensate by going for those strange, grey areas we haven’t seen portrayed in the media.

Daniel Scheinert: Growing up, my friends in high school were very sensitive guys who liked to have sleepovers and talk about life. It’s the opposite of what most guys are supposed to do, but I feel there is something both fun and terrifying about putting that sort of soft masculinity out into the world. I think this film accidentally became the opposite of The Revenant, which is a survival film about brute force overcoming nature, men against men, revenge…it’s a very hard, traditional film about masculinity. Ours is the other spectrum of what men can be. I think it’s made some guys uncomfortable because it’s way too earnest and sincere about guys feeling uncomfortable with themselves and their shame. We were just talking about how this film rests in so many grey areas, both in genre and other aspects. It’s somewhere between an indie and a studio film, it first about four different genres, and then the relationship the main characters have spans many different types of relationships, they go from being strangers, to a parental-child thing, to a buddy comedy, to straight up lovers and then it transcends that.

Speaking of things guys aren’t supposed to be doing growing up, Daniel you did musical theatre in school, and I thought the aesthetics of Swiss Army Man were very DIY/let’s put on a show. You’ve mentioned wanting to work in as many mediums as possible, so is theatre on your list next?

Daniel Scheinert: I definitely miss theatre. Good theatre is probably my favorite artistic experience I’ve ever witnessed, but bad theatre, oh man. [Laughs] But, yeah, I would love to make theatre. For a long time our dream was to make a feature film, so it’s time to make some new dreams. We love the idea of new challenges, so a video game, or a play…

If you could pick a classic musical to get your hands on and do in your style what would it be?

Daniel Scheinert: I’ve always wanted to steal an album by a band and make a musical. No, actually nevermind that, I don’t want to make Across the Universe.

Daniel Kwan: I was just listening to NPR the other day and they were doing a breakdown of West Side Story and it reminded me how beautiful that musical is.

Daniel Scheinert: I think maybe Bat Boy, that’s an old style musical and I love it. It’s so crazy.

There is a moment in the movie…

Daniel Scheinert: Wait, you know what musical we really want to make? Years ago we came up with this idea to make an Off-Broadway show called Spider-Man: The Musical: The Musical, and it would have Julie Taymor, Bono and The Edge trying to make the musical, while their lives are falling to shit in this impossible thing. People just dying and getting injured, and everyone blaming them. It’s like a dramatic musical retelling of the behind-the-scenes drama, and it’s narrated by a Spider-Man actor caught in the rafters above the audience. So he whispers, asks for help and tells the audience what happens next.

I love the moment in the film when Hank is trying to recreate moments from his life so Manny can learn about them. In a way it makes it a movie about making movies, have you guys thought of teaching young people about your aesthetics?

Daniel Kwan: We actually helped start a summer camp for kids who get to come for free and then we make music videos for real bands. The band comes in, the kids come up with the idea and we just film it there. We actually met in a summer camp originally during college. We had so much fun creating that we both were drawn to, and I can see how that bled into our work, the whole thing about making things real, and using your imagination.

Daniel Scheinert: We don’t really “teach” the kids though. It’s all about collaboration. Kids and adults become friends, everyone contributes ideas and the best way to learn is making shit together. We get a kick out of being collaborators rather than teachers.

In terms of special effects gone wrong, what’s the “one that got away” or that crazy thing you’ve never been able to master?

Daniel Scheinert: Oh there’s a whole lot. Our process is to just come up with images that make us laugh or sound cool, so we have this backlog of things we want to do, like “what if we put the camera here?” or “let’s do something underwater,” a lot of our work starts from that grab bag. But we got a lot out of our system in this movie.

I hope you guys get to speak to Terry Gross about the importance of boners in terms of representation. I’m not even joking, but it’s insane we live in a world where people are uncomfortable talking or seeing erections and have no problem with guns and rifles.

Daniel Scheinert: I didn’t consciously think about it when we made the movie, but even the word “boner” is right on the line of whether you have to bleep it or not. On late night, Daniel and Paul are making the rounds and Colbert said “erection” not “boner,” but then I think Jimmy Fallon said “boner.” It’s great to push that angle, not in a jokey way, but more like let’s all talk about this. We’ll start a campaign to talk to Terry Gross though.

Swiss Army Man is now in theaters nationwide. Watch the Daniels analyze a scene above.