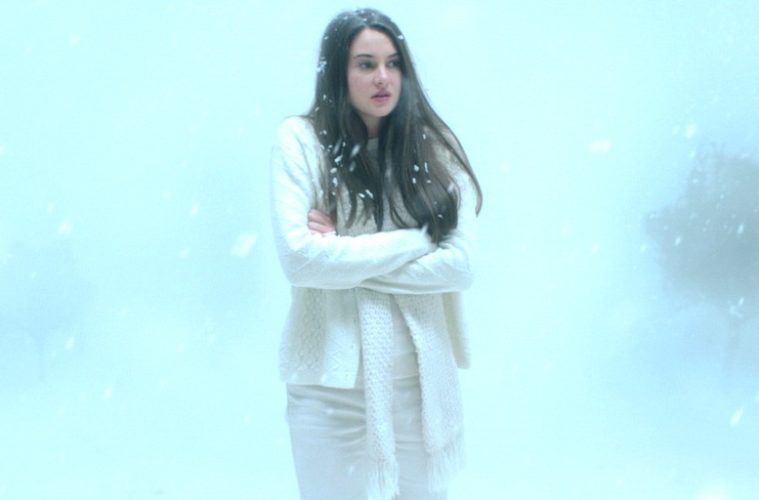 During White Bird in a Blizzard, our lead Kat Connors (Shailene Woodley), is browsing records with a friend (Gabourey Sidibe) and a poster for David Lynch‘s debut Eraserhead lines the wall. A clear nod to the auteur that director Gregg Araki (Mysterious Skin, Kaboom) is inspired by, his latest feature could have used a bit more of that brand of strange in this surprisingly standard, but engaging coming-of-age story.

Opening in the fall of 1988, we quickly learn that Connors’ mother Eve (Eva Green) has vanished. Employing a well-executed structure that mixes flashback with the then-present, courtesy of Connors’ sessions with her therapist (Angela Bassett), Araki explores the possible reasons for her disappearance, particularly hinting at her boredom as a housewife. As Connors ponders the downfall of her parents’ marriage (with Christopher Meloni playing the pitch-perfect role as a matter-of-fact, reserved husband, and a bit of a ladies’ man at the office), the film is just as much about a teenager’s sexual awakening. Bored by her next-door boyfriend Phil (Shiloh Fernandez, whose character is only one step removed from the pool cleaner in Mike Judge’s overlooked Extract), Connors wonders what sex with the detective (Tom Jane) on her mother’s disappearance case might be like, with Araki capturing such an event with sensible eroticism rather than explicitness. Although still haunted by a snow-covered dream invoked in the title regarding where she may be, the thought of her mother returning begins to fade away, and untroubled by the event, she steps into her own identity.

Living in a heightened reality thanks to the saturated cinematography (courtesy of Sandra Valde-Hansen) and 1950’s-style sets, Araki’s drama is deceivingly simple in its plot, but there’s a certain uneasiness lurking at the center. One can never quite tell how Connors’ sexual adventures will affect her (certain hard cuts to black signal defining moments), but Araki peels back the disturbingly competitive connection Eve once had with her daughter. While the mystery of her mother’s vanishing begins to add up, it’s a plot thread that’s much less interesting compared to the journey of our lead.

Thankfully, the film skirts around some obvious foreshadowing in favor of Woodley’s arc, but the finale feels bafflingly incongruent with the rest of the film, resulting in more of a shrug than anything else. Gratefully, the rest of Araki’s latest drama is a refreshingly frank coming-of-age story, featuring another great performance from Woodley, whose character embodies a certain maturity that feels opposite of her turn as a naive bystander in last year’s successful Sundance drama The Spectacular Now. If her involvement in a project such as this signals a new direction for the actress, it’s one we’ll gladly welcome.

White Bird in a Blizzard premiered at Sundance Film Festival 2014. One can see our full coverage of the festival below.