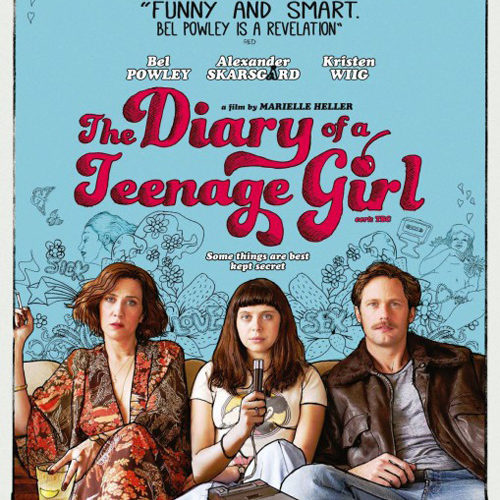 [Sundance Review] The Diary of a Teenage Girl

Sometimes there’s a small sense of dread while watching a great film unfold. When a movie is running smoothly and firing on all cylinders, a small voice inside your head asks, “When is this gonna go downhill?” In the case of first-time director Marielle Heller‘s stunning debut, The Diary of a Teenage Girl, a dip in quality never comes. Based on Phoebe Gloeckner‘s 2002 graphic novel of the same name, Heller’s adaptation is an outstanding coming-of-age story.

Set in San Francisco during the 1970s, the film follows Minnie Goetze (Bel Powley), a young teenage girl experimenting with her sexuality, drugs, and more. In the opening scene, which features Dwight Twilley’s “Looking for the Magic,” Minnie is walking on a high: she’s just had sex for the first time. The problem is, she had sex with her mother’s (Kristen Wiig) boyfriend, Monroe (Alexander Skarsgård). Minnie and Monroe continue their illegal fling behind Charlotte’s (Wiig) back. The young girl develops feelings for the older man, which, for the most part, are not reciprocated. For the first time Minnie experiences love, desire, confusion, and plenty of other relatable emotions. One doesn’t need to be a female or have had intercourse with their mother’s boyfriend to connect with The Diary of a Teenage Girl. This seemingly wild story, including drugs and plenty of sex before the age of 18, is actually fairly universal. Seeing the world through Minnie’s eyes holds one’s attention from beginning to end, but once one exits the theater, it’s impossible not to reflect on the decisions we’ve all made as a teenager — namely the mistakes. There’s a beautiful line where Minnie discusses the experience of returning to her grade school: everything looks so much smaller, and that’s a perfect metaphor for plenty of the decisions Minnie and other people make at a young age. At some point all those questionable choices are put into perspective — learning how big those choices truly were and how they shaped one as a person. Minnie makes some truly bad mistakes, but, this being the furthest thing from a straightforward drama, they often lead to good things.

Not once does Heller judge Minnie’s actions or gloss over her perspective. When Minnie has sex with Monroe, Heller doesn’t hide the young girl’s excitement. Heller shows the good and the bad in their relationship. Monroe’s not portrayed as a monster here. He’s a conflicted human being not without moments of kindness. Heller paints an accurate, honest and vibrant portrait of Minnie’s perspective. With the use of some beautiful hand-drawn animation, an enlightening and funny narration, and Powley’s versatile performance, this is about as intimate as a subjective picture gets. We experience the world as this young girl does. What’s exciting for Minnie feels truly exciting, and the same goes for any moments of pain and confusion she experiences. Since The Diary of a Teenage Girl does involve drug use, of course the film hits a more dour note in the third act, but it earns the expected downfall. Heller shows how drugs ultimately hurt this young girl, but she also conveys how they open Minnie’s eyes and influence her artwork.

Nothing is one-sided or one-note here. Every character has their strengths and flaws, including Minnie’s former stepfather, Pascal, played by Christopher Meloni, who reminds us there’s no such thing as small parts. He has the funniest line in the movie — which is saying a lot — that’s later payed off in such a beautiful way, capping off Minnie’s moving arc. That wonderful little joke and emotional payoff is just another reminder of how incredible Heller’s debut film truly is. Once the credits roll, expect some tears to flow.

The Diary of a Teenage Girl premiered at Sundance Film Festival and opens on August 7th.