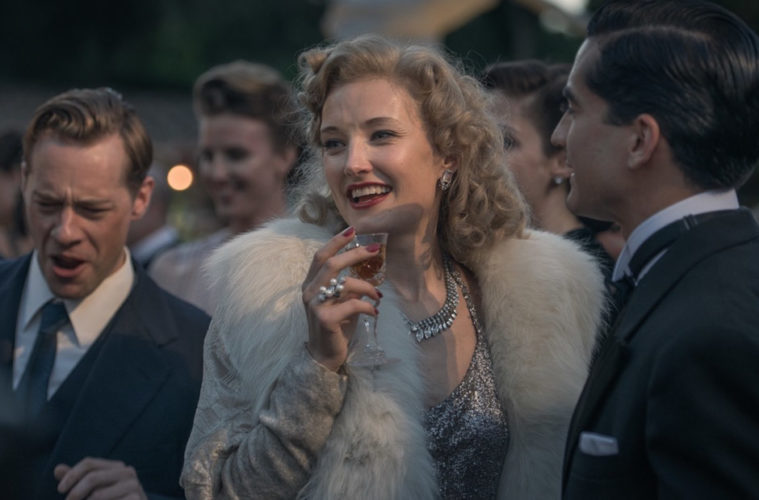 How much do you know about Sonja Henie? The answer to that question may dictate to what degree you’ll enjoy the biopic Sonja – The White Swan. Directed by Anne Sewitsky and starring Ine Marie Wilmann, the film tells the story of a unique star within a standard structure. As a child in Norway, young Sonja learns how to skate with her brother. Quickly we jump into adulthood, our lead now a European sensation, ice skating to packed venues.

When she and her father (Anders Mordal) get the offer to expand the scope of Sonja’s celebrity from Arthur Wirtz (Malcolm Adams), it’s an easy decision. They move to Hollywood and are in the office of Darryl Zanuck (Aidan McArdle) before long. The studio mogul makes one offer. Sonja demands a bigger one. And she gets what she wants. Cut to a reenacted dance sequence from One in a Million, a kiss scene with Tyrone Powers (Sonja’s real-life lover) from Thin Ice.

She makes a friend in assistant Connie (Valene Kane) and pays for her brother Leif (Eldar Skar) to come to America. Fast success soon leads to manic failure. The first half moves at a quicker pace, complete with a few montages set to modern music that adds an additional element of style. Once Sonja’s bad temper and late nights begin to catch up with her, the film seems to slow down to marvel at the tragedy.

Wilmann is certainly engaging as the titular star, giving an extremely physical performance. She’s doing all she can to expand a woefully straightforward screenplay, from Mette M. Bølstad and Andreas Markusson. Sewitsky appears very capable behind the camera, employing several different visual tricks to keep the energy up as things begin to get dire for Henie. It’s enough to keep viewers engaged, though not enough to keep up with the excitement of the first half.

If Sonja Henie is a new piece of history for those watching, Sonja: The White Swan will be a fascinating ride: detailing how a European athlete–credited for inventing what we now consider modern ice skating–became a movie star in a matter of years. As a radio personality comments in the film, skating pictures briefly became the thing in Hollywood. Unfortunately, Sewitsky and her team don’t do much more than recount the tale. Perhaps the bar for biopics are higher than they’ve ever been before. The story alone is one thing, but there needs to be something more when it’s playing on the silver screen.

Sonja – The White Swan premiered at the Sundance Film Festival.