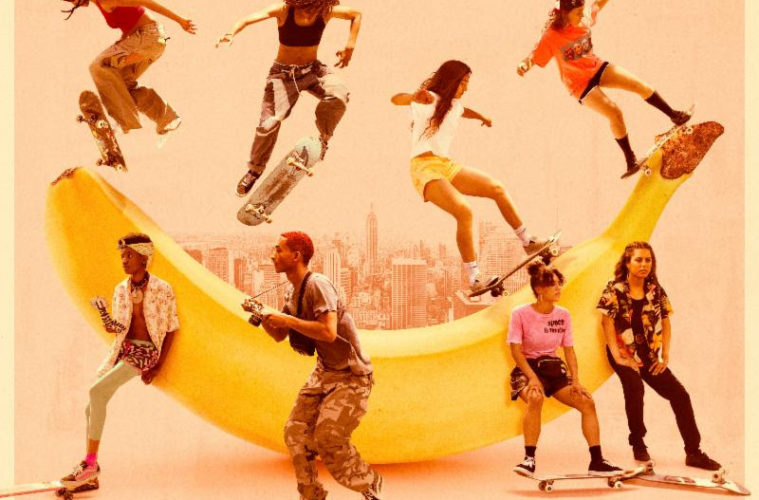 For her breakthrough documentary The Wolfpack, director Crystal Moselle discovered a group of sheltered brothers in NYC’s Lower East Side and captured their passion for filmmaking. With a muddled style and questionable directorial choices, it didn’t quite live up to the film’s initial hook, but Moselle clearly showed talent for making a connection with the youth of the city. That latter quality continues with Skate Kitchen, which uses a narrative backdrop to place us in the center of a female teen skater group–who Moselle discovered on a subway ride–all of whom exude a care-free independence as they make NYC their playground. It’s such a step-up in vibrancy, scope, and emotion that it feels like the introduction of an entirely different, more accomplished filmmaker.

Our entry point into this subculture skater life comes with Camille (Rachelle Vinburg), a Long Island teen who dreams of spending her days at a Lower East Side Coleman Skatepark under the Williamsburg Bridge. She’s been following the group, known as Skate Kitchen, on Instagram, where their main goal is to get “clips,” courtesy of a videographer in the tight-knit clan. With a hard-working mom (Elizabeth Rodriguez) who doesn’t give her the attention or approval she seeks, Camille finds an avenue for expression quite literally on NYC’s busy sidewalks.

On a basic level, Moselle knows how viscerally effective blasting a killer soundtrack over graceful, ground-level shots of skateboarding can be. While this makes up at least a third of her film, she also doesn’t skimp on getting to know this group of girls. Even if a few lines can feel stilted as they often hilariously banter back and forth about tampons and sex, and, more seriously, parental-inflicted hardship, there’s an authenticity running through it all. So, while cranking up Khalid’s “Young Dumb & Broke” as we see the skaters takeover midtown Manhattan is perfect synergy, it only works as well as it does because of Camille’s fractured life we’ve seen thus far and her beaming passion when she executes the perfect trick, forgetting everything back at home.

While Skate Kitchen and the girls that make it up have become internet stars themselves, Moselle’s biggest celebrity is Jaden Smith, who plays the Devon, a more isolated member of the boy’s group–who get thankfully little screentime as the girls shine. He strikes up a connection with Camille after discovering they both work at the same supermarket and they spend nights shooting photographs and bonding over their mutual love for skating. Moselle, Aslihan Unaldi, and Jennifer Silverman’s script can feel a bit obvious in terms of where this arc will lead Camille, but on a scene-by-scene basis, the dialogue rings with an un-adorned sincerity.

With Skate Kitchen, Moselle has crafted the rare empowering, generation-appealing film that doesn’t feel like it’s a writer decades removed talking down to the current era or someone trying too hard to capture today’s technological influence. Skating through the open city streets, there’s a freshness and energy here as we spend blissful sun-lit summer afternoons with this talented clan. If one felt American Honey was too preoccupied with depicting the socioeconomic situation of its characters and projecting their potentially doomed fate, Skate Kitchen carries a similar energy of immediacy, but resonates greater as it focuses on celebrating one’s passion and basking in the culture where they’ve found their home.