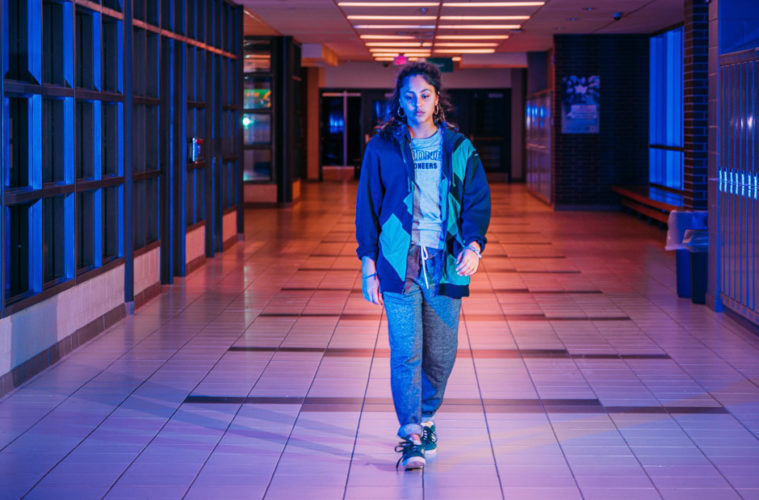 Waking up on her front lawn, high school student Mandy (Rhianne Barreto) isn’t sure what went down after last night’s party, but she’s about to (partially) find out: texts alerting her to footage of what happened soon come flooding in from concerned friends, and it’s bad enough for her parents to take her out of school and launch a police investigation into what is considered video evidence of disgusting criminality.

Watching this disturbing scene—seeing Mandy receive a number of texts at once—I was struck by the recollection of one of the more frightening sequences in Olivier Assayas’ Personal Shopper, where Kristen Stewart’s character is texting on a train with a mysterious person she doesn’t know. C’mon, you think: how can texting be scary? Well, Share’s believable take on an influx of alarming messages is so very anxiety-inducing that it felt akin to a horror film, but of course receiving videos of your blackout experience is always going to be horrific—especially when said videos reveal acts that have your body and reputation.

The film unfolds as you’d expect it would, but that’s not necessarily a criticism: Mandy’s well-intentioned parents try their best to navigate the situation, the investigation goes forward, and she begins attending memory-jogging therapy sessions involving a strip of LED lights that feel like a visual metaphor for the “…” you see on the opposite end of a text-based communication.

I doubt this is a coincidence, because this isn’t the first expression of today’s texting culture in Bianco’s film. Much in the same way almost every frame of We Need To Talk About Kevin is dipped in crimson red, Share is tinted in what seems like, for lack of a better Pantone, iMessage blue: Whether Mandy is sitting in front of her glowing television playing video games or hanging out in a neon-lit basement party, the film’s color palette is as glum as its protagonist, who is pulled between wanting to know what happened and an intense desire to move on.

While initially an appropriate, quite thoughtful aesthetic decision, Share’s blue, blue, blue visual motif does begin to feel a little draining, mostly because there’s little variety or pop to what we’re watching. This nitpick aside, Rhianne Barreto’s performance is unimpeachable, holding in a torrent of emotions while feeling lost in a sea of lies amidst an already confusing environment (high school).  This restraint is similarly found in both Bianco’s sensitive script and mature, measured direction. Frankly, if the film didn’t feel at times like it was shot through the cyan lens of a pair of anaglyph 3D glasses, you’d never guess this was a first feature at all.

Share premiered at the Sundance Film Festival and comes to HBO on July 27.