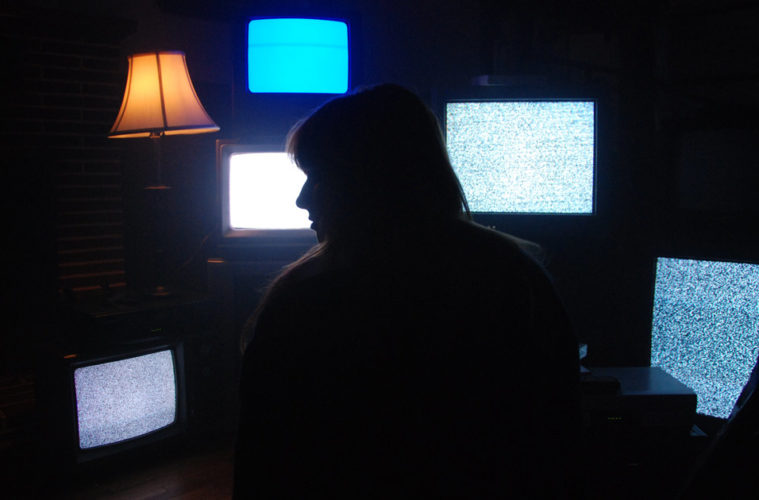 It has been exactly one year since the original V/H/S played at Sundance, yet we already have the sequel to the horror omnibus cleverly titled V/H/S/2. In case you are unfamiliar with the original premise, a bunch of hooligans break into a house and discover VHS tapes each documenting some sort of terrifying tale. Each scary short is directed by different filmmakers while the wrapper storyline serves as interstitial breaks between each segment. In the sequel, a pair of private investigators searching for a missing student stumble upon a similar house and, low and behold, find more videotapes to watch. While this narrative gimmick seems perfectly suited for the horror genre, there is a lack of cohesion that makes this sequel feel like a half-baked follow-up. As was true in the original, some segments are stronger and more effective than others and your mileage may vary depending on your taste in horror. Adam Wingard, the only returning director who also serves as executive producer, kicks things off with a story about a man whose eye is replaced with a robotic one. Yet an unforeseen consequence of having this digital eye enhancement installed is the ability to see ghosts. While an interesting exercise in POV filmmaking, Wingard’s performance as the lead feels stilted and the scares are mostly schlocky and contrived. It relies on that type of shock where you pan the camera slowly and drop a jarring sound effect while a scary kid appears ominously. Also, while an interesting setup, there is virtually no narrative payoff for all the buildup.

Next up is Edúardo Sanchez and Gregg Hale‘s somewhat comedic segment involving an unsuspecting bicyclist and a group of zombies. While having a GoPro camera (which are prominently featured and used throughout every segment) outfitted to his helmet, the bicyclist becomes bitten by a female zombie victim who he was trying to help. The end result is essentially a zombie POV experience, as he searches for flesh to eat. There are some great sight gags and some clever uses of the GoPro camera, but the overall experience is a one-trick pony that again offers little narrative substance. The third and by far superior segment, perhaps in the short franchise thus far, is Gareth Evans and Timo Tjahjanto‘s disturbing descent into an Indonesian nightmare. A news crew decides to investigate a seedy cult leader who is rumored to be sleeping with young female children and brainwashing his followers. Without giving away too many details from there on out, the tables quickly turn on the news crew as they become unwittingly involved in a disturbing ritual to unleash a demonic force. Suffice to say, Evans and Tjahjanto push the envelope for what one can do with a short and deserve a chance to make a feature length horror film together.

The final segment comes from Jason Eisener who aims to deliver frightening scares with a sci-fi twist but barely succeeds. The setup is actually fairly promising: a group of kids play pranks on one another while their parents are gone, giving the initial characters a Goonies-esque vibe. But as the day progresses, a series of unusual events occur signalizing the arrival of some other-worldly visitors. Again, this segment suffers from the similar scare tactic tropes that make it equally bland as the first two. Overall V/H/S/2 doesn’t really gel with all of its pieces, making the final product a sub-par incarnation of the original.