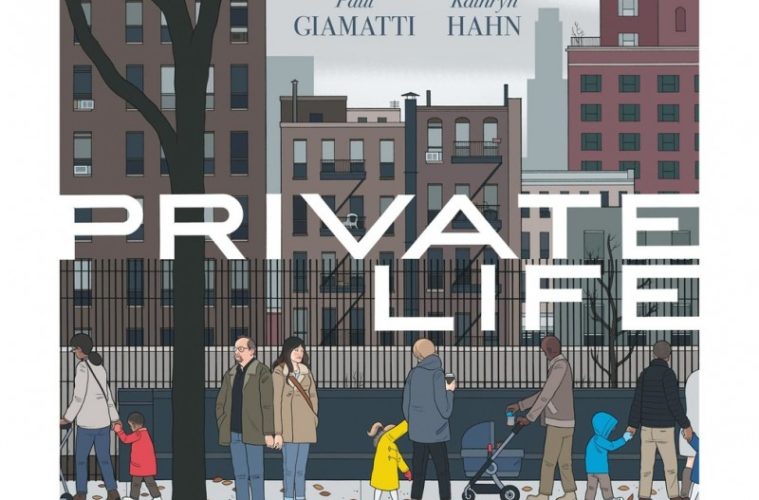 Over a decade since her remarkably observed and authentically acted The Savages, writer-director Tamara Jenkins makes her long-awaited return to Sundance and feature filmmaking with Private Life, a generous, graceful, full-hearted drama about the complexities of desiring a child when your physiology denies you at every turn. Lest one thinks this is a somber look at such an intimate journey, Jenkins imbues an immense amount of humor and relatability without ever hitting a false note.

Split into chapter of The Retrieval, The Transfer, The Home Study, and The Test–titles which eventually fall away as the process becomes messier–we meet Rachel (Kathryn Hahn) and Richard (Paul Giamatti) years after they’ve already been trying to have children. In their forties and living on a noisy street in Manhattan’s Alphabet City, they still hold passion for their more fruitful past lives in the arts, but to make ends meet Richard owns a pickle business while still keeping up a theater company and Rachel is on the cusp of publishing her new book. What truly consumes their lives, however, is having a child. Having struggled for years, along with pursuing adoption, they undergo a number of fertility treatments with unsuccessful results. When their step-niece Sadie (Kayli Carter) comes live with them, the proposition arises of the now-college dropout to offer up one of her eggs to be given to Rachel. As expected, familial complications ensue.

A runtime of over two hours affords Jenkins the ability to let scenes breathe and characters flourish while filling in an abundance of beautiful touches and still keeping a relatively narrow scope. As we’re dropped into their struggle with little exposition, Hahn and Giamatti display a weathered fatigue as they go from appointment to appointment–and all the needle injections in between–yet as soon as the potential glimmer of a new life arrives, their exuberance shows through. Jenkins’ magnificently-layered script leaves room for moments of pause in both the triumphs of a potential child and the valleys of their inner despondency.

In one memorable scene, the couple is confronted with the regret over not answering the door when kids in their building come in for Halloween. Jenkins pauses the camera in the darkness of their apartment as they sullenly look to the floor, regrets of both not having children of their own and a shame of not making this holiday special for their young neighbors washing over them. It’s these small observations peppered throughout that add a sincere dose of life to Jenkins’ frames, shot by Christos Voudouris, who expertly captured another middle-age relationship in Before Midnight.

Bringing levity to the tumultuousness of this soul-crushing commitment, the writer-director finds a wealth of humor in depicting Rachel and Richard’s strained but no-less loving marriage. One sequence has them preparing for the visit of an adoption advisor and surveying the placement of a crude painting centering on a vagina. As Rachel tears through the room with only a shirt, mirroring the painting as we see everything underneath, she howls about how they won’t take it down and the adoption advisor should see their true selves. This exchange articulately sums up the characters Jenkins has crafted: by keeping a hyper specificity, there’s never sense they are overwritten or speaking as general mouthpieces for overarching themes of marital strife.

In the decade since Step Brothers, Hahn has been a delight in every project she’s taken part in and Private Life provides her most fully fleshed-out character, bottling up then discharging the many insecurities such a personal journey brings. As her spouse, Giamatti shows an affection and commitment, even when hard truths bubble up. The dramatic weight of Private Life lies in the push and pull of their expectations to each other, and even when the film feels elongated, it’s an appropriate reflection of an aspiration that often doesn’t have easy answers.

In her breakthrough feature role, Kayli Carter is also excellent, seemingly plucked out of a Noah Baumbach movie as she spouts newly-learned philosophy on art and living. As her character’s parents, Molly Shannon and John Carroll Lynch feel like they could be the stars of their own film, a testament to how well-developed every member of the ensemble is.

It’s a minor miracle that Jenkins is able to wring out such hardship, honesty, and humor in the life-consuming marital strain of infertility. One hopes Jenkins doesn’t decide to wait another decade for a follow-up, but if takes that long to accrue all of the small perceptive insights on behavior that make up Private Life, then we’ll be waiting with pleasure.

Private Life premiered at the Sundance Film Festival and will be released by Netflix on October 5.