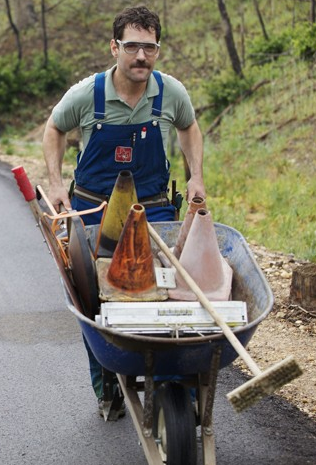 Despite the hilarious Pineapple Express, there’s no denying David Gordon Green has been on a downward spiral with each new step into the world of studio comedy. So it came as a wonderful surprise last summer when it was revealed he secretly shot an independent road comedy with Emile Hirsch and Paul Rudd. A remake of Iceland’s Either Way, Prince Avalanche has now been unveiled at the Sundance Film Festival and it’s a welcome return to form for the writer/director.

An unconventional period piece, the film takes place in 1988 following a wildfire the previous year that wreaked havoc on a section of the Texan landscape. The hard-working Alvin (Rudd) is spending the summer with the menial task of repainting traffic lines and inserting traffic markers. Requiring some assistance with the work, he brings along the aloof, but well-meaning Lance (Hirsch), brother to Alvin’s girlfriend.

Taking a portion of the raunchy comedy found in his recent works (apparent when Lance discusses his complicated romantic life, or even more so when he masturbates alongside a half-sleeping Alvin in their shared tent), along with a dose of genuine drama as revelations build and build to a breaking point, the character-based film is an ideal transition for Green from his recent slapstick passions to the authentic dramas that launched his career. The finest pleasures are derived when it is simply our two leads having a heartfelt one-on-one exchange. These are two very different people with wildly contrasting dreams, yet Green is able to convey a natural, human connection at the center. “Being alone is not the same as being lonely,” the wiser (or at least more experienced) Alvin says to the immature Lance, who is fed up with the lack of potential sex partners in this vast wilderness.

While these honest exchanges will have one glued to the screen, the story begins to meander when Rudd is alone during their weekends off. Speaking to the strong dynamic our two leads have together, when Lance heads back into town in a search for meaningless relationships, Green attempts to sell Alvin’s loneliness, but his hands-off approach results in a unaffecting, relatively dry sequence.

When the next work week kicks off though, major conflict enters the picture and our previously reserved characters are finally able to break out of their respective shells and put their true colors on display. While still remaining quaint in style, it is in these moments that we are able to recall why Green’s earlier dramas were so well-received in the first place — this is a writer who knows every quirk and trait of his characters. Despite some misgivings, the relaxed, lively Prince Avalanche shines with a strong heart.