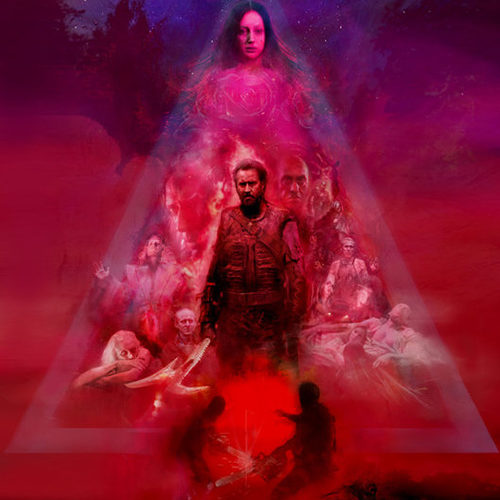 In an era of dime-a-dozen Nicolas Cage movies, you may think you know what you’re getting when sitting down for his latest feature. Rest assured, nothing could prepare you for the experience of Mandy. I’m not even referring to the gory and gleeful shocks–of which the back half has many–but rather Panos Cosmatos’ intoxicating, singular version, which mixes beauty and batshit insanity for an LSD-fueled descent into darkness like no other.

Of course, those familiar with his vibrant debut feature Beyond the Black Rainbow–also set in 1983–will be no stranger to Cosmatos’ phantasmagorical style, having waited nearly a decade for a follow-up. With his revenge tale Mandy, he shows an impressive expansion of scope while still retaining a hazy psychedelic palette, but most compelling is his union with the perfect actor to lead this psychotic vision: Nicolas Cage. Working as a lumberjack in what looks like the Pacific Northwest, but is labeled as the otherworldly location of The Shadow Mountains, Cage’s Red Miller lives a humble life, enjoying his intimate relationship with Mandy (Andrew Riseborough). In the evenings, they talk about their favorite planets and childhood memories in their cabin, featuring a bed placed in an all-window sunroom so they can take in all of the beautiful, but haunting nature around them.

Something lurks in the darkness of the woods, and after talking a walk amongst the blood-red treeline, Mandy is acquainted with the gnarly-looking cult named Children of the New Dawn. Their leader takes a liking to Mandy and soon she’s captured by what can only be described as S&M fiends-meet-death metal band from hell. While we won’t spoil her fate, let’s just say the catalyst for Cage’s path of blood-thirsty revenge is more warranted than any film of its ilk in recent memory. To consume the grief and pain, he downs nearly an entire bottle of vodka in a single shot, in what is clearly his own Rooney Mara-eats-a-pie-scene a la A Ghost Story.

What follows is a logic-defying, drug-fueled rampage, carried out by chainsaws and a custom-crafted, futuristic axe that wreaks havoc on anyone that crosses his path. Featuring a synth-metal score by Jóhann Jóhannsson and hallucinatory cinematography by Benjamin Loeb that makes complete use of the wide frame, Cosmatos’ vision is an all-encompassing one of pure psychosis. By easing us into this world through Red and Mandy’s touching and unconventional romance, it makes the pay-off to come that much greater.

As in the best gonzo horror, there’s also a thread of comedy running throughout. After one of Red’s early kills, buckets of blood spew on to his face in such an absurd fashion that one can’t help to chuckle. With crimson plasma spewn across his body, Cage gets to a maniacal level that Cosmatos, miraculously, is able to match with his approach. Whether it’s snorting a pile of coke off a shattered piece of glass or wildly screaming during his battles, the actor is clearly in his gloriously depraved happy place. Along with animated bits, there also might be the best creature of the year, Cheddar Goblin, introduced through a family-aimed commercial in between killings.

If one thought Beyond the Black Rainbow had a spare throughline, Cosmatos seems to throw everything at the screen here. Even if elements like Lizzie the tiger seem more for show than anything else, it all builds to a bigger environment that expands even greater by the final frame. Most surprising of all, Mandy isn’t solely about the carnage-heavy path for revenge. Cosmatos knows that the impact will be much greater felt if there’s an emotional backbone. Thus, one can feel the soul-churning passion behind every popping eye and crushed skull.

Mandy premiered at the Sundance Film Festival and opens on September 14.