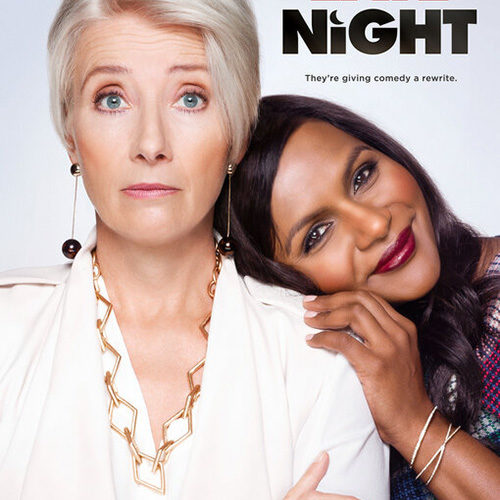 Sundance Review: ‘Late Night’ Has the Laughs, Lacks the Focus

For the first bit of Late Night, directed by Nisha Ganatra and written by Mindy Kaling, everything’s working and working well. What’s introduced as the central plot is extremely compelling: legendary late night host Katherine Newbury (Emma Thompson, making it look easy) fights to keep her job after a decade of bad ratings, stale jokes, and high-brow guests. After being told she has a penchant for hating female writers, Katherine demands her producer (the great Denis O’Hare) hire one. Enter Molly Patel (Kaling, charming as ever), a chemical plant manager who pulls some clever strings to score an interview for the position at the perfect time.

Before it gets bogged down by the rest, this film is fun and fluid. Thompson’s landing zingers left and right while Kaling plays it genuine and forthright. There’s a group of seven white men that make up the writer’s room before Molly and it is comprised of many talented actors (Reid Scott, Hugh Dancy, Paul Walter Hauser, and John Early to name a few) playing up different levels of misogyny. John Lithgow shows up as Katherine’s devoted husband, as does Amy Ryan, playing the network president determined to get the 56-year old pain-in-the-butt out of the building.

There’s a very honest and interesting look at life for women in the workplace in 2019, attacking multiple issues quite directly, whether it be diversity hiring, nepotism, topical comedy, and gender double standards. Unfortunately, the ballooning narrative loses its thread and never really recovers. Hugh Dancy emerges as a potential romantic interest for Molly before becoming a ringer for a necessary plot twist. Another thread involving Lithgow allows for a lovely scene between him and Kaling, while failing to fit into the larger scope in an organic way.

Situational comedy hooks dictate much of the pacing and the editing (reaction shots, punchline cuts). Some are funny, some distract from the main event. What’s worse, the filmmakers spend the first half of this film poking fun at the fact that Katherine’s show is tired and unfunny and that the reason for this is Katherine’s apathy for the jokes and the writers that write them. Once the need to change is registered and Katherine considers getting involved in the process once more, we are told she has always demanded excellence and that demand has led to her cold demeanor and biting tongue. It’s a muddying of two opposite character traits that is extremely hard to reconcile.

When Thompson and Kaling are playing off each other, Late Night sings. That so much of it is focused elsewhere feels like a miscalculation. We’re watching bits of a few different movies here. One wishes it all fit better together.

Late Night premiered at the Sundance Film Festival and opens on June 7.