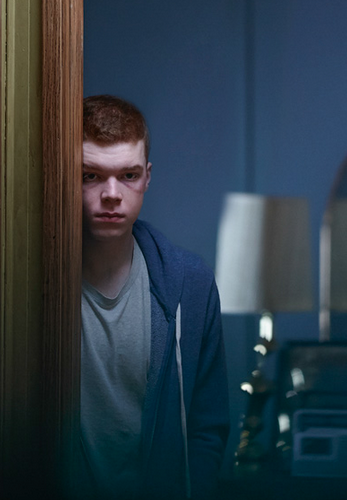 Jamie Marks is dead, we learn during the opening shots of the latest film from Carter Smith. Although some causes are hinted at, there’s no answer to the cause of the teenager’s death, but not many people in the town seem to care. In a classroom following his passing, not a single person can recall a memory with him, but there’s two schoolmates that find interest in this loss of life. Adapted from Christopher Barzak’s novel One for Sorrow, Jamie Marks is Dead takes a supernatural approach in dealing with the effect of one’s passing, as the afterlife and material world merge.

Gracie (Homeland’s Morgan Saylor, who gives a compelling performance here) is the first to discover his body near a river, stopping by his funeral site to help craft a memorial. One day she meets Adam (Cameron Monaghan) there, a cross-country team stand-out who previously saw Jamie Marks (Noah Silver) get bullied by his squad, developing an obsession with how and why the teenager died. Living close by each other, Gracie and Adam soon develop a connection and are startled when the nearly-naked ghost of Jamie Marks mysteriously appears before them and pulls them into his world. Smith’s expertise in crafting visceral, frightening scenarios — exemplified in his somewhat under-appreciated studio horror feature The Ruins — is fully on display here. Conjuring a gloomy view, in both the afterlife and the real world, the director seems to be in complete control of his vision, particularly in the sound design and downcast cinematography.

Unfortunately, the story comes up lacking. As the relationship with Adam and Jamie deepens, Smith seems to hold back on what could have been a fascinating narrative of homoeroticism, with Adam not wanting to move further with Gracie as he gets closer and closer with Jamie. Regardless, taking the film on its own terms, its muddy script is far too repetitive and drawn out to provide the affecting, poetic, character-driven ghost story Smith is putting forth.

A hair-raising subplot surrounding another member of the undead (Madisen Beaty, embodying a polar opposite character than that found in The Master), seems at odds with the subdued nature of the rest of the film, as the director sways more towards his last feature, losing the considerable steam built up in the main narrative. It may have more brains behind it than The Ruins, but hopefully Smith can find material truly worthy of his technical talents with his next feature.

Jamie Marks is Dead premiered at Sundance Film Festival 2014. One can see our full coverage of the festival below.