Sundance Review: Hatching is a Horror Story for the Modern Family 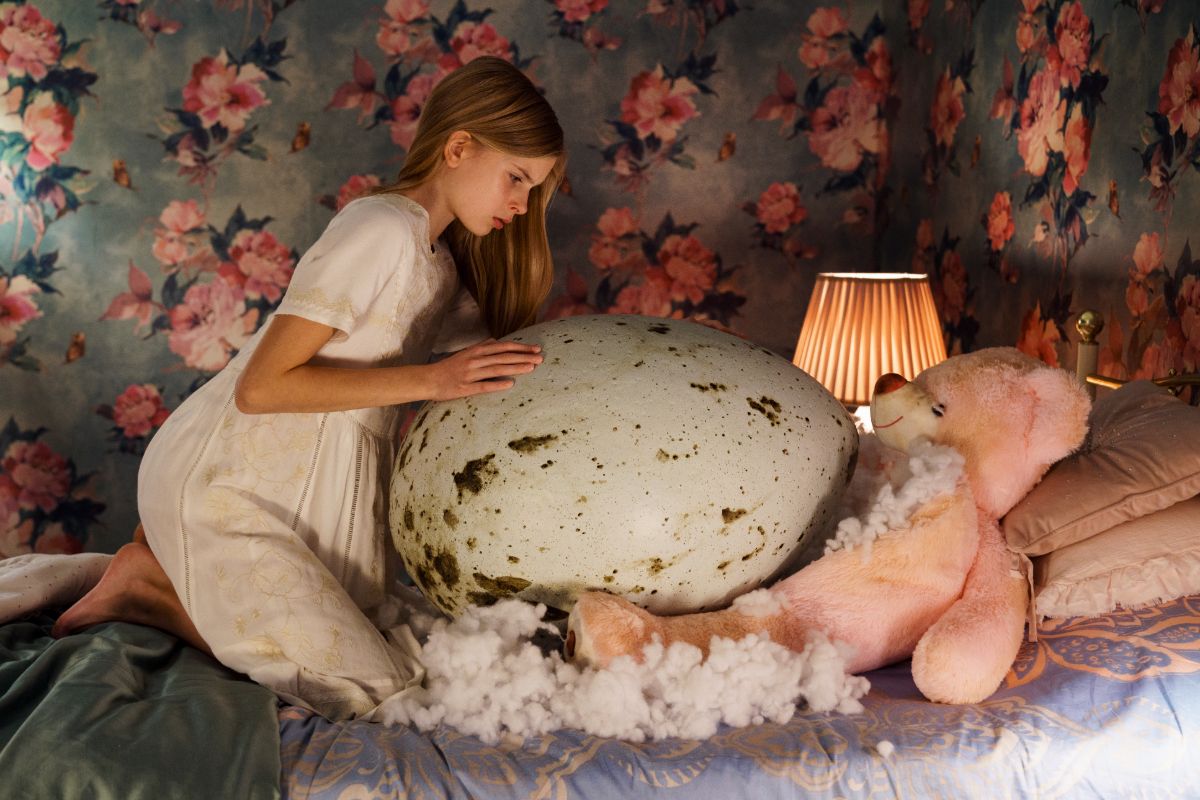 Mother (Sophia Heikkilä) has the perfect family. The kind of family who would no doubt have made Adolf Hitler shed a single, wistful tear. It’s because of this that Mother makes a living placing her family’s unblemished, Aryan faces in front of a selfie camera and documenting their lives for all the world to see. In their crisp, pastel pink-and-white garments that they flounce around within the walls of their toy dollhouse home—the latter of which the camera establishes by floating around the exterior to mimic drone shots Mother uses in her family vlogs—the nuclear family at the center of Finnish director Hanna Bergholm’s rattling feature debut Hatching projects an image of unattainable attainability. It’s the same sort that modern-day vloggers and influencers profit from in real life. Smiling faces, tousled hair, audience-acceptable kisses and hugs, restrained displays of affection. The kind of family that is everyone and no one at all, meticulously crafted for an era in which aspirational voyeurism has become a principal pastime for millions.

Hatching begins with one such vlogging session. As mother and her family—Father (Jani Volanen), young son Matias (Oiva Ollila), and older daughter Tinja (Siiri Solalinna)—finish up a video with their beaming faces smushed together into one single, pasty mass, a stray crow makes its way into the family’s house. The blackened, unholy beast dirties up the family’s pristine display of wholesome vanity, screaming and thrashing wildly around the precisely arranged living room while the family screams along with it. Until Tinja captures the bird at a still moment and gently drops a towel over the terrified creature, picking it up and swaddling it in her arms like a baby. Mother beckons Tinja over to her so that, assumedly, she may return the crow back into the wild. Instead Mother crushes the creature’s head with her bare hands. Later that night, in a sequence that (as with a good portion of the film) exists in some purgatory between dreaming and waking, Tinja ventures into the nearby forest upon hearing distant shrieks of an injured animal. The cries belong to another crow, whose merciful death by Tinja’s hand leaves its solitary egg now orphaned. Tinja takes the abandoned ovum back in her room and warms it under her stuffed animal.

Written by Ilja Rautsi, Hatching considers the children that are being raised in an age of obsessive superficiality. Mother only shows affection towards Tinja through the prism of her vlogs, conveying adoration towards her daughter when watching videos of themselves together—the videos uploaded and adored and validated by other people. Behind the camera, Mother is a ruthless hustler to her gymnast daughter, less a parent than an image coach, veering Tinja from athletics and to churning out better content. Tinja intimately understands this, which is why she’s determined to be a better mother to her crow’s egg than her mother is to her, in spite of all its, well… flaws.

Because Tinja’s tainted love begets something unholy from her egg, a monstrous manifestation of rage and neglect that acts as an extension of herself and lashes out against those who upset her. In a way, Hatching could work as a weird, inverse sister to David Cronenberg’s The Brood—a work about a mother whose anger towards her past familial abuse manifests as demon spawn she bears from an external womb. In Hatching, a daughter’s resentment towards her mother’s emotional disregard and self-obsession creates an ugly child of her own. Mother tells Tinja, sans self-awareness, that she has finally loved someone for the first time—the man with whom she’s cheating on Father. Tinja looks at her mother in abject horror.

Hatching is, perhaps, less formally stimulating than necessary. If it could be argued the less-than-inspired direction and cinematography (courtesy Jarkko T. Laine) are a mirror interpretation of the emotionless sterility in Mother’s vlogs, certain moments and set designs are memorable and arresting. Tinja’s bedroom flanked ceiling-to-floor in its antiquated, rose-patterned wallpaper leaves its mark, as does a nightmarish sequence wherein Tinja visits her mangled friend in the hospital, the facility’s horrific pallor acting in a kind of perverse rejection of her family’s respectable whiteness. And at some point during the sharp, 80-minute runtime I realized I’d forgone all pretensions about revealing the monster a little too early and found myself taken by its peculiar spell. Hatching is a bit too self-serious to play as fun as it could, but also too repulsive and inelegant to be written off as another silly little attempt at prestige horror. And the pièce de resistance of this whole affair is the creature—too fluid to be practical, too gnarly to be wholly CG. The result is impressive, and its gradual transformation produces some of the most chilling moments.

Bergholm’s debut is ultimately a knotty delight, however on-the-nose its metaphor about those monsters we fashion from our own disfigured forms of love. Hatching closes on a downer note I did not necessarily predict but that did not surprise me, satisfyingly reflecting my own ideas about what may very well be happening to the children coming of age in an era so dependent upon cultivating an audience—a corrupted form of intimacy during a fragile period of growth, as readily passed down to offspring as an act of violence.

Hatching premiered at the 2022 Sundance Film Festival and opens on April 29.