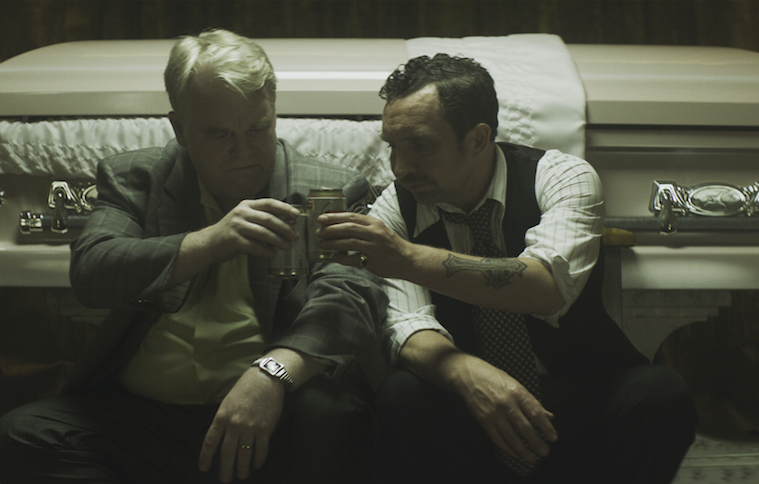 God’s Pocket, the feature directorial debut of Mad Men’s John Slattery, is a dark comedy determined to paint a distinct picture of small life in a very particular kind of town. It’s place full of colorful characters but lacking in a particularly interesting tale to tell, or a particularly interesting way to tell it. The town, in this case, is God’s Pocket, and we open at a funeral. A young man named Leon (Caleb Landry Jones) has died, and the people of God’s Pocket have gathered to mourn and get drunk in their own way.

Lensed with a particularly muddy aesthetic by cinematographer Lance Acord, Slattery’s town reveals itself to be a place of cynicism, addiction and regret, lined with moments of humor, sometimes unbearable, sometimes unexpected, sometimes unnecessary. The screenplay, adapted by Slattery and Alex Metcalf from the Pete Dexter novel, never fully finds it’s footing between comedy and drama. Hoffman plays Mickey with an earnest downtrodden-ness that’s at once intriguing and disengaging. This is a man without much to live for, and he walks around with the weight of that knowledge. He barely registers the death of his stepson, and mostly cannot be bothered with what happens in the aftermath.

Meanwhile, Hendricks is saddled with a sadly underwritten character in Jeannie. At first devastated by the loss of her only child, she soon becomes suspicious of the circumstances, convinced foul play was an accomplice in her son’s death (spoiler, it was). Where this development opens a door for her character to bloom into something more than a grieving wife, Slattery chooses to anchor her with insecurity and doubt. For a film directed by a great character actor and starring some of the greatest character actors, God’s Pocket offers performances that too often feel staid and stale.

The biggest disappointment comes in the form of Richard Jenkins’ resident drunk columnist. Though he bookends the film with some overwrought voice-over from his columns, the immediate necessity of this character never feels naturally integrated into the plot at hand. Though his action “drive” the film to something of a third-act climax, by then we’re too befuddled and aggravated by the nonsensical decisions these characters have made to invest in the end result.

God’s Pocket premiered at Sundance Film Festival 2014. One can see our full coverage of the festival below.