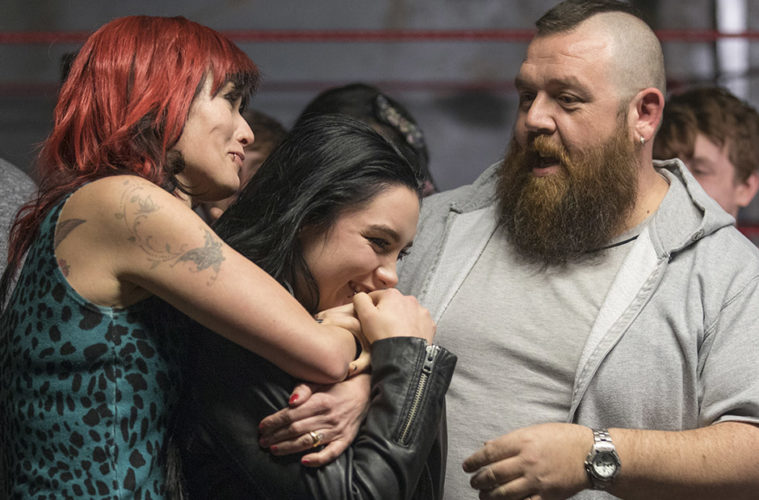 Sundance Review: ‘Fighting with My Family’ is Saved by Stephen Merchant’s Comedic Voice

A crowdpleaser down to its bones, Fighting with My Family shows the importance of bringing an entertaining perspective to a true story. This tale of a British underdog with major wrestling dreams is thoroughly elevated by the participation of writer-director Stephen Merchant. His brand of dry, off-kilter comedy surges through what is an otherwise inspiring, but by-the-numbers tale of childhood aspirations come true.

The Knight family’s one and only passion is wrestling. From a rough-and-tumble lower-class neighborhood in Norwich, Julia (Lena Headey) and (Nick Frost) found their way out of trouble by dedicating their life to the sport, which is “not fake, but fixed,” evidenced by the real injuries sustained by pulling off greater and greater stunts. This passion has extended to their daughter Saraya (Florence Pugh) and son Zak (Jack Lowden), who learn their craft at a young age and perform matches to a relatively small, but endearing community of fans and other wrestling hopefuls in the area, including a blind teenager. The game changes when WWE coach Hutch (Vince Vaughn) sees their tape and decides to bring the brother and sister in for the first stage of auditions with the ultimate goal of landing some on-air time in a major arena.

Adapted from The Wrestlers: Fighting with My Family, Dwayne Johnson saw the Channel 4 documentary in the middle of the night while filming Furious 6 in London, and he made the clever decision of recruiting his Tooth Fairy co-star Merchant to write and direct the film. With both of them taking minor, but scene-stealing roles in the film, The Office co-writer and co-director adds a layer of hilarious humor here that adds a vital spark as we go through the familiar beats of the inspiring underdog story. As one might expect, it’s the family dynamics that really shine, whether it’s Frost’s character actually trying out painful moves to a fellow wrestler or Merchant mining all he can get out of a clash of classes when the timid, polite family of Zak’s fiancée comes over for dinner. This humor is mostly reserved for the first half when we spend more time in Norfolk county before Saraya (spoilers!) makes the cut and heads to Florida, leaving her bitter brother and family behind.

It’s this second half of character-testing training that falls into a much more familiar groove, yet still peppered with engaging bits. There’s, of course, a little more Dwayne Johnson who is seen as (a perhaps) larger-than-life version of himself. Vaughn, who looks to have wandered in from the set of Dodgeball, is playing to all of his strengths here with no shortage of one-liners and exasperated stares. In one of this section’s most impressive decisions, Merchant subverts the stereotypical ideas of what Saraya thinks of the attractive group of models that seem to be earning all the attention.

As proven since her break-out role in Lady MacBeth, Pugh is a force to be reckoned with, giving a believe drive and passion to her character’s arc. With her journey towards stardom being as much about the physical aspect as the charisma-making showboating, when she falters in the latter, we genuinely feel that awkwardness and pain. Considering it’s backed by WWE, Fighting with My Family doesn’t pull too many unexpected punches, but as someone who has never watched a split-second of wrestling in their life, the fact that I was engaged with this underdog story is a testament to the success of Merchant’s first solo directing effort.

Fighting with My Family premiered at the Sundance Film Festival and opens on February 14.