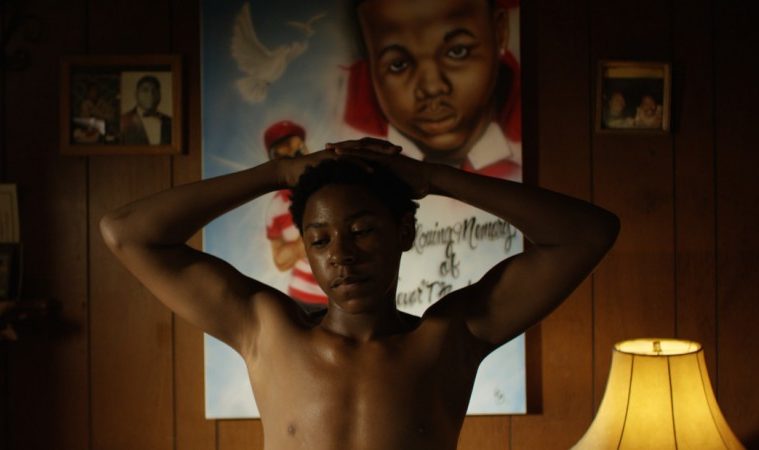 Throughout cinema’s history, gangster life has often been depicted in glamorous fashion with an endless access to drugs, guns, women, sports cars, and mansions. Even if these lives are short-lived, filmmakers have long venerated their excess, and one glance at popular culture confirms audiences have reciprocated the fascination. For the characters of Dayveon, however, this way of life is grounded in economic necessity. With the ensemble of mostly non-actors never less than utterly convincing, Amman Abbasi’s debut drama is captivating in its immediacy, despite a script that doesn’t feel fully formed.

Following the gang-related death of his brother, the 13-year-old Dayveon (Devin Blackmon) is feeling like a lost soul, not wanting his sister Kim’s (Chasity Moore) live-in boyfriend, Bryan (Dontrell Bright) to replace his recently deceased family member.”Everything stupid,” our lead remarks in the opening scene as he bikes through his decaying Arkansas town. Although he’s quick to smile, play Xbox, and go on adventures with his sole friend Brayden (Kordell Johnson), there’s an emptiness hiding behind his eyes and the result is a desire to lash out.

While he does so verbally when it comes to those closest to him, a more dangerous mode of rebellion lies with his newly minted involvement with the local gang of Bloods via a public beating that turns from brutal to an reluctant rite of passage. Led by Mook (Lachion Buckingham), the gang leader recruits Dayveon and Brayden to go on a robbery with him and our point-of-view is wisely centered solely on our lead. As the terror washes over him when the reality of the situation sinks in, our sympathy for this dire, unavoidable path of survival increases.

Utilizing a 4:3 ratio, cinematographer Dustin Lane takes a page from the Robbie Ryan handbook with his symmetrical framing and vibrant color palette reminiscent of the films of Andrea Arnold, finding beauty in both the Arkansas skyline and the black bodies that command the frame. A hyper-stylized effect is also used, perhaps overly so, which with its sped-up frame-rate and over-blown colors gives the impression of a home movie. Often shooting from the hip as the camera weaves in and out of conversations, our perspective is embedded into the life of Dayveon, strengthening our empathy for his situation.

Reluctant to talk about his brother’s death, Dayveon finds a solitary peace in swiping through his old Facebook photos, as well as an airbrushed painting that takes up much of his bedroom wall. In another Arnold-esque touch, Abbassi repeatedly captures a nearby bee’s nest growing outside Dayveon’s apartment. It makes for evocative imagery, a metaphor for clinging to the inescapable way of life of our lead, even if it kills one.

Backed by the superb producing talent of Jody Hill, Danny McBride, James Schamus, and, most notably David Gordon Green — whose poetic depiction of the rural south in George Washington feels like a precursor — Abbasi and co-writer Steven Reneau nail the socio-economic factors in this life of crime. Dayveon is a strong calling card for Abbasi, as well as its ensemble, but with its abrupt ending and a script that seems to rely more on authenticity than narrative inventiveness, one wishes its depiction of burnt-out gangster life left more of an impression.