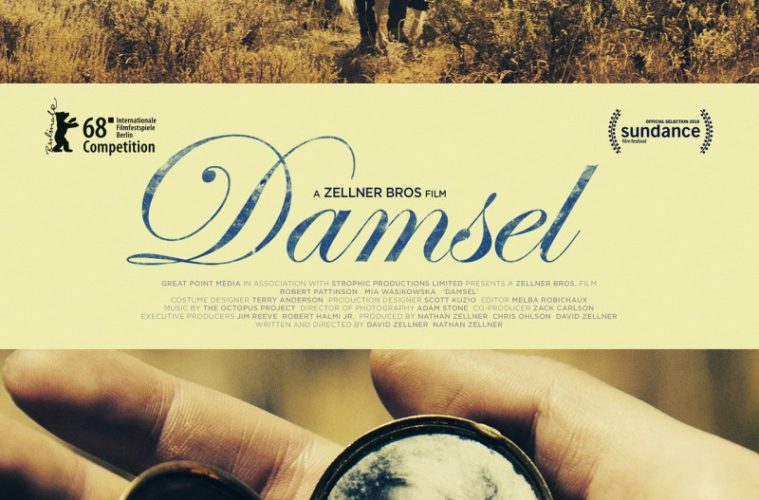 Two men sit on a bench in the vast desert of the American west waiting for a stagecoach that’s nowhere to be found. One, a grizzled preacher (Robert Forster), is fed up with the ways of the great unknown and headed back east; the other, Parson Henry (David Zellner), is headed west and eager to start a new life. “Things are going to be shitty in new and interesting ways,” Forster’s character warns the newcomer, dashing his hopes that what awaits isn’t the land of his dreams. For the beautiful Penelope (Mia Wasikowska), however, this terrain is far more dangerous. Surrounded by desperate men at every turn, the mission of the west is not just to survive, but live by her own romantic means.

Before we get to know her, though, Damsel introduces us to Samuel Alabaster (Robert Pattinson), who travels with his gun, guitar, and a miniature pony named Butterscotch. (Eat your heart out, #TeamBunzo). Despite the stunning vistas and other signifiers of the genre, we quickly grasp that David and Nathan Zellner have crafted an anti-western, lovingly poking fun at its foundation while slyly pulling the rug under the audience in humorous, forward-thinking, and genre-redefining fashion. As Samuel arrives at the town bar, he reluctantly accepts a whiskey after a pilsner isn’t offered. Sheepishly taking just a sip because his “pussy stomach” can’t handle the alcohol, he then declines an offer from the local drunk to join a “gangbang” to get the know the community. Suffice to say, he doesn’t fit the bill of a brawny, virile cowboy.

Samuel is focused on a greater mission: to rescue his true love and fiancée Penelope, who he believes has been kidnapped by true evil. After sobering up Parson Henry, who has been granted the town’s pastoral duties in an unofficial capacity, they set out on an adventure. From here on out, the Zellners have numerous surprises up their sleeves in this hilariously eccentric deadpan comic-western that are best left unspoiled. Playing in a more blatantly humorous register than their last film, Kumiko, the Treasure Hunter, it’s still subdued enough to stay true to the duo’s dry, carefully-orchestrated tone.

Following up Pattinson’s career-best performance in Good Time, his Samuel is not far from being an ancestor to Connie. Also a disillusioned protagonist who manipulates to reach his ultimate goal, the actor plays his character like a good-natured, scrawny teenager who has watched every John Wayne western, but wouldn’t be able to get his gun out of the holster in a duel. “I’m not a gunslinger. I’m just a man,” he says after performing his cheesily sincere love song “Honeybun,” in part to convince to Parson Henry of the passion driving their rescue mission.

Once she enters the picture, Wasikowska’s Penelope, boasting a bent shotgun and a spirit of independence, emerges as a western character for the ages by defying the standard female archetype found in the genre. “I don’t need anybody’s saving!,” she exclaims in regards to offer after offer of the lonely men that cross her path and desire her affectation. As the Zellners continue to deconstruct the foundational, male-centric ideals of a western, Wasikowska has a determined fierceness as she puts everyone she come across in their rightful place.

Shot by Jeff Nichols’ longtime cinematographer Adam Stone, there’s bountiful visual gags, including unprecedented territory in a western–examples include our hero masturbating to a photo locket of Penelope and someone continuing to pee after being brutally shot in the head. As gratuitous as this sounds, there’s a lightness to the proceedings with a vivid palette and a tonal approach not unlike if the Coens directed Slow West. With their specifically droll but no less engaging style, the Zellners’ witty script touches on everything from over-reaching masculinity to cultural vampirism, and more topics absent since the birth of the western. There are few films that make one rethink the entire genre that came before it, but with their continually surprising, feminist bent approach, the Zellners have succeeded in doing so.