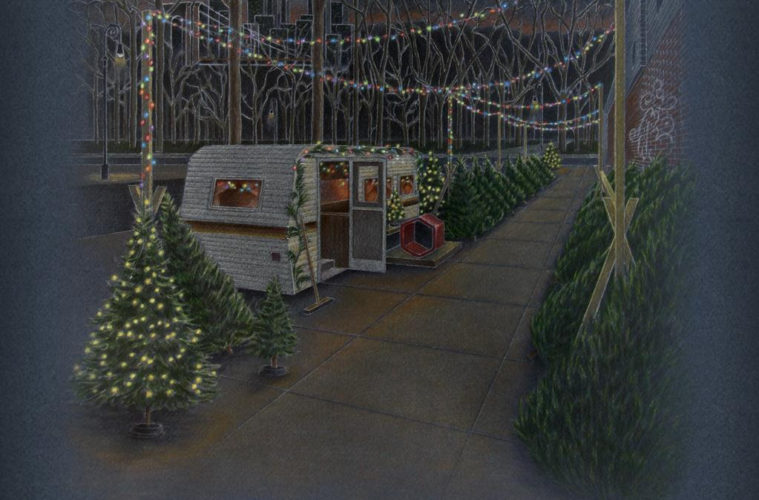 Christmas time is a lonely time for many; a “time of giving” that reminds more than a few of us what we’ve lost. This is the feeling Christmas, Again wades in, as produced, written and directed by Charles Poekel. We follow Noel (Kentucker Audley), who’s selling Christmas trees on a Manhattan curb for the fifth winter in a row. He’s getting over a recent break-up and working with the younger brother of the friend that used to be his partner.

It’s a lonely state of affairs, Noel waking up for the night shift, taking medication, sweeping the pine needles off of the curb, etc. Audley is an extremely talented young actor whose been around for some time now, supporting in fellow Sundance movies like V/H/S and Ain’t Them Bodies Saints. Here in the lead he proves vulnerable and endearing, building an authentic character to care about and root for even during these smallest of trials and tribulations. In 80 minutes, you will learn more about the art of selling Christmas trees than you ever wanted to know. It’s something equal parts redundant and fascinating. Hannah Gross enters the picture as Lydia, a young woman Noel comes across stone cold drunk on a park bench nearby. He takes her back to the trailer and cleans her up. The next morning, the two have an awkward exchange and Lydia’s gone. Days later she returns, pie in hand as a thank you to Noel. Bit by bit, some semblance of narrative structure begins to creep in, Poekel taking his time, clearly far more interested in these people than the story built around them.

The camera throughout is Christmas, Again is constantly finding focus. And while it’s an aesthetic choice that takes some time to get used to, it ultimately adds to the hazy story being told. The cinematographer, Sean Price Williams (who also shot the superb Listen Up Philip), does good work in shooting New York City as vibrant and cold and lonely.

As Noel stops taking his meds and starts smiling a little bit more, we worry; this is a fragile soul stepping back up to the plate. Poekel lets Audley play it this late-in-the-game optimism for what it is: cautious. Christmas Eve nears and we hope for Noel. It’s here in these last 20 minutes that Christmas, Again becomes the kind of Christmas movie not very common anymore. One lacking in cynicism and irony. We’ve watched someone beat the holidays, a noble victory for anyone.