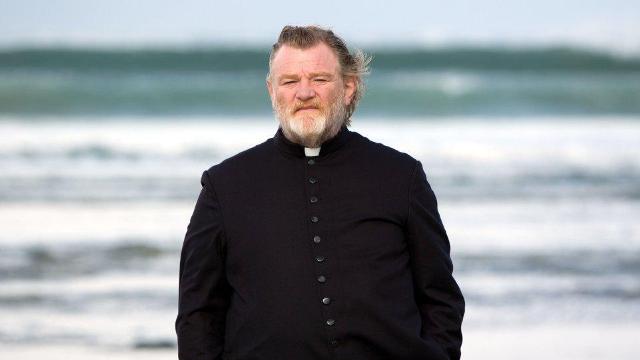 Calvary opens hard on Father James (Brendan Gleeson) sitting in his confessional, listening to his parishioners’ sins. In comes a scarily calm voice from the other side of the confessional, telling Father James he’s going to be killed in a week’s time in retribution for terrible sins committed by a terrible priest.

It’s a memorable way to open a film, and Gleeson does well in wearing the threat on his face throughout the picture. A kindly priest with a long history of sin, Calvary is, in its best moments, a highlight reel of how impressive an actor Brendan Gleeson is and has been. The script and direction come from John Michael McDonagh, who found considerable Sundance success with the far broader, cop-out-of-water comedy The Guard.

Father James makes his way around the small Irish sea town he presides over, engaging in conversations with the colorful collection of locals. There’s the local coroner (Aidan Gillen) with some intense perversions; the local wife (Marie-Josee Croze) married to the local butcher (Chris O’Dowd) and having an affair with the local barfly (Isaach De Bankole); the local old man with a penchant for long, meandering discussions (M. Emmet Walsh). Along for the ride is James’ troubled daughter (Kelly Reilly), recovering from a suicide attempt. The film is structured as a eulogy of sorts, as experienced by the soon-to-be departed. Truths are revealed and consequences are had, all of it soaked in the tone of dark comedy. It’s a tough sell, and the comedy-to-drama ratio is only marginally successful in Calvary. McDonagh’s writing talent is without question and the themes throughout are undeniably intriguing. This is a man who’s wrestling with the application of faith in the real world, the townspeople his petrie dish.

Unfortunately, too many conversations tread over the same ground while the laconic pacing begins to wear thin. Considerable violence is played for laughs, sometimes undermining the more dramatic character developments. The script’s cynicism does mesh well with James’ sympathetic loner, building to a final scene that resonates with surprising force.

Some sweeping cinematography from Larry Smith and an overwrought score from Patrick Cassidy also help drive the emotion home. These subtle manipulations, along with a generally stagnant frame, prevent Calvary from living up to its ideas.

Calvary premiered at Sundance Film Festival 2014. One can see our full coverage of the festival below.