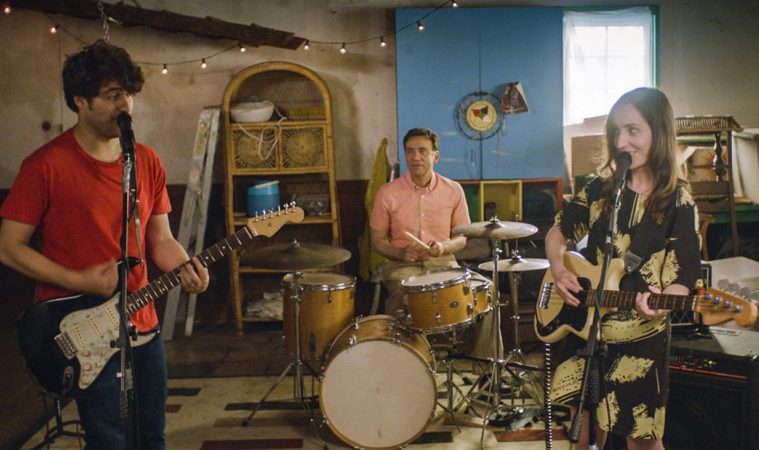 If one is familiar with Richard and Linda Thompson’s discography they would automatically be reminded of the once-married musician couple’s “Shoot Out the Lights,” their greatest work together, but also a therapeutic record made during a tumultuous period in their relationship. The feelings and emotions expressed in the record felt all too real. Zoe Lister-Jones‘ feature debut — which she also wrote, stars in, produced, and co-wrote the lyrics for the songs in — Band Aid, tries to follow the same path to varying results.

Lister-Jones plays Anna, a frustrated Uber driver who is married to Ben (Adam Pally), a freelancer that hangs around every during the week in his underwear smoking weed and doing Photoshop designing jobs. Their marriage is rocky, to say the least, with constant arguments over the most mundane of things, primarily doing the dishes. They are lost and bewildered by the prospect of a monogamous life together. They are also both failed artists: Anna had a failed book deal and Ben is a failed visual artist. These frustrations amount to constant bickering and a lot of weed-smoking.

A eureka moment occurs when they attend a kiddie birthday party for a toddler of a friend and start to toy with the baby instruments in the back yard, including a guitar and a tambourine. They create a song on the spot, which satisfies them to no end and makes them wonder if forming a band and writing about their problems might be a therapeutic life-saver.

They have plenty of unused instruments in the basement, and after one look at them, they are blowing off the dust that has accumulated over the years. They hire their weirdo next door neighbor (Fred Armisen, stealing every scene he’s in), a former drummer, to join in on their “therapy sessions.” The songs work, both artistically and therapeutically, and soon Anna, Ben, and their neighbor are playing their “fight songs” in local bars.

The songs (penned by Lister-Jones and Kyle Forester) feel genuine and heartfelt. They won’t win any Grammys, but they have the feel of spontaneity and excitement that comes in creating art. The band scenes are exciting to watch and have a free-flowing style to them that makes one understand the flawed couple even further. These songs are messy, raw, amateurish, but feel all too real. Lister-Jones’ camera, featuring cinematography by Hillary Spera, expertly moves through the basement to capture what it must feel like to be there. It’s also smart editor Libby Cuenin doesn’t succumb to constant cuts, a frenetic approach that mars many music videos today, making the emotions come across more genuine.

The arc does eventually take a less-than-ideal turn to obvious indie dramedy tropes. The artistic high eventually comes back down to earth, so they need to sit down and tackle the issues that have lurked deep inside them for many years. The fight that occurs in the final section has the kind of clichés that have been a better part of most romantic comedies for the last three decades. It helps that the chemistry between Lister-Jones and Pally works, but one does wonder if another pass at the script would have elevated the film for one to care more about what’s at stake.

The real star here is the Lister-Jones; a character-actor for most of her career thus far, she offers the break-out talent that Sundance has been home to in years past with her likability factor being through the roof. With her piercing green eyes and enough passion in her artistry to make one fall for her every move, Band Aid is a showcase for her talents and one comes away from it thoroughly impressed and excited for what might come next in her career.