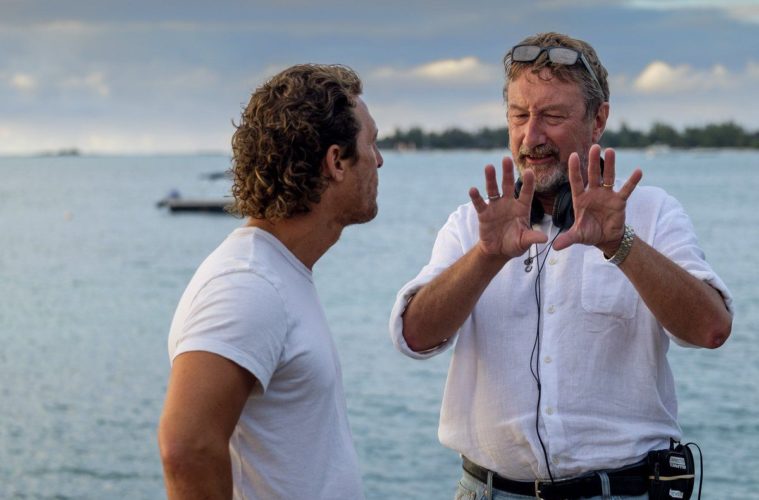 Steven Knight is a busy man. An incredibly accomplished screenwriter (Dirty Pretty Things, Eastern Promises) and director (Redemption, Locke), he’s got several projects in, or about go into, production. There’s also Peaky Blinders, a show he created, and his new thriller Serenity, starring Matthew McConaughey and Anne Hathaway, which The Film Stage was lucky enough to speak with him about. We talked through the risky twist in the movie (some spoilers ahead!), the motivations that come with challenging yourself as a director, and the unfortunate underperformance of Allied.

The Film Stage: This movie is framed as an old-fashioned film noir at the start, which is very refreshing because you don’t get a lot of those anymore, at least on the big screen. And then, without jumping into huge spoilers, you make a crucial narrative decision that’s pretty radical. It’s hinted at throughout but when it happens it’s surprising and fairly fascinating. How did you get there from the development of the idea?

Steven Knight: Yeah, the original idea came when I went out on a fishing boat some years ago with a captain who was very accommodating and polite with tourists… but as soon the fish came on he changed and was completely obsessed with catching this fish. And his whole life was this obsession with catching a fish every day. He lived in this beautiful place and yet it seemed like the beauty of the things around him he didn’t see. He was just obsessed with this one thing.

So I started to construct a character who was that person and I started to find reasons why he would be like that and why he would be living there. But, at the same time, whenever I direct a film I try to set myself a challenge. So with Locke it was: “Could you make the most ordinary man in Britain doing the most ordinary job, driving in a car on a motorway. Could you make that, just that, into a film?” And with [Serenity], what I wanted to do was construct a story with characters that hopefully engage an audience and then, at the most inconvenient time in a conventional narrative, remove everything. And make it not what you thought it was. That offered the possibility that since, in retrospect, you realize that this situation and these people had been created that you could start to mine some of the tropes and genres of fiction. And I wanted Baker Dill [Matthew McConaughey] to be the in the tradition of The American Hero–starting with Captain Ahab in Moby Dick. That sort of closed-down wanderer who is not in the place where they should be and has secrets. There is something very heroic about them and that’s what I wanted Baker Dill to be and then, when you’ve paid homage to that fictional tradition, pull it apart and have that character question their reality and their obsession and ask, “Why am I obsessed with this? Is it because it’s a game or is it because it’s real?”

I wanted to do that while fully aware that the challenge of doing that would sort of contradict a lot of the rules of filmmaking; where you set up the stakes and then there are no stakes. So I hope that audiences come away with questions and it was my way of trying to deal with lots of different things. The way that my kids play computer games, how their suspension of disbelief is so radically enhanced by the fact that they’re part of it. That they’re playing it, that they’re creating it. [It’s a] new form of fiction… I wanted to break up the normal narrative structure of a film.

It’s definitely a bold choice and while watching it it’s hard not to respect the reveal and roll with it. Going back to Locke in reference to this new film, it sounds like it started like it was going to be something more of a chamber piece and then evolved? Like you said, to challenge yourself?

Yeah. What I wanted was the story itself–the ex-girlfriend showing up saying “I want you to kill my husband”–sets you up for what would be a 1940s, 1950s thriller, if you like. And then, having done that, to then put a wrecking ball through it was what I wanted to do.

For the past two decades you’ve been one of the most talented and sought-after screenwriters working. Now that you’ve been directing, how does that writing career inform you when you’re behind the camera? How does the creative process expand when you are writing and directing?

Well, I consider myself to be a writer who occasionally directs. Directing is a physical, structural act of construction. It really is brick by brick. It’s hard work. Sometimes I feel compelled to do it partly because some of the things I direct I don’t think anybody else would want to direct. [Laughs]

In terms of how the career works you obviously take some time off for writing but I consider myself to primarily be a writer and, at the moment, I’m doing a lot of television. And I have screenplays that I’ve written in the past year or two years that are just coming to fruition.

There is one movie you wrote that I wanted to ask about because I have a deep appreciation for it and it seemed to get a bit lost during its release. The movie’s Allied and I’m wondering when that releases and then comes and goes without much fanfare is that something you’re surprised by? Or are you mitigating expectations?

I think in the movie business it’s best not to have expectations [for a film’s reception and performance] because you never know what is the thing that it is going to be judged on, strangely. Allied came out at a very odd time in terms of what was going on. I strongly believe, whether it’s Serenity or Locke or anything else, what I hope to create is films that when they’re watched ten years from now they won’t be identifiable as from the period they’re from. That they’re not the products of the zeitgeist, if you like. I think that can be problematic but I think it’s really worth making sure what you’re doing is what you want to do and not what the times sort of dictates.

It’s an interesting point looking back at a lot of your scripts. There is a timelessness there that speaks to what you’re talking about. Now then, I would imagine, in bringing it back to Serenity and the elements revealed, that there is a risk of dating the material given the tech, let’s say, that is in there.

Yeah, I mean, the tech side of it I took advice on and obviously that will change. The thing that interests me is the way that the kid in the film is in a different reality and I look at my kids and other people where, just lately, the amount of engagement with human beings and their screens–in other words, within a reality that isn’t physically present–is astonishing. It’s absolutely astonishing. I’m not saying it’s good or bad, I’m saying it’s a new reality and I think it’s exactly that. Because people know that the thing in the screen is not physically real but then what’s real? If it’s real in that moment to them then that’s the reality that they’re in. So you can go into a cafe and there will be twenty people all existing in their own reality. They’re not really in the cafe anymore. That’s good and bad and that’s what I wanted to explore with Serenity. We go into a reality being created our screen. It sounds outlandish that there would be such a thing but the truth is if you walk into a cafe and someone’s wearing headphones, staring at a screen and playing a game, if you tap them on the shoulder for a split second they are between two realities. They have to come out of the one and come into this one. The reality is much boring than the stuff on the screen. [Laughs]

What’s next in the immediate future, you mentioned you were jumping back into some writing?

We’re shooting a TV thing, quite a big series for Apple [the television series See starring Jason Momoa], which is being shot at the moment in Vancouver. And I’ve got a movie with Jake Gyllenhaal going into production (the psychological thriller Rio also starring Benedict Cumberbatch] and an untitled movie also going into production hopefully late spring of 2019.