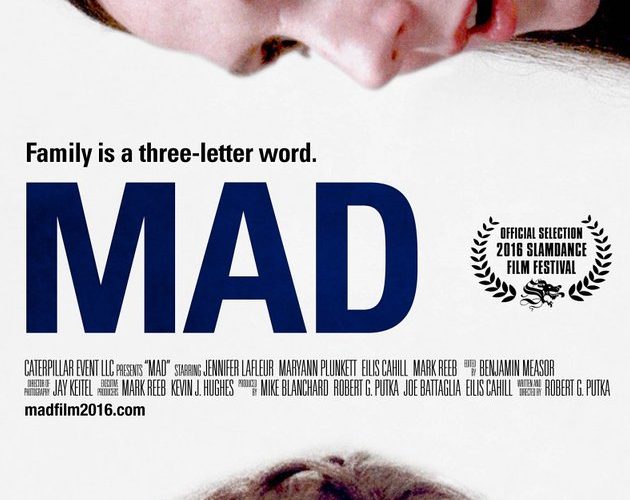 We as a culture have only recently started a collective conversation about the realities of mental illness and the ways they effect us. Premiering at Slamdance, Mad is a character piece with an uncommonly perceptive view towards the way mental illness can cause collateral damage. But that’s not to say that it handles things gingerly or with gentle political correctness. Within the opening minutes, it’s clear that these characters don’t fit into our newfound progressive sensitivity toward the subject. Mad is a slow motion car wreck, exploding the effects of the illness across a mother and her two dysfunctional children.

The narrative isn’t involved, but it’s essential to the understanding of the characters. The story begins when Connie (Jennifer Lafleur), a married working professional receives a call from the hospital about her bipolar, newly divorced mother, Mel (Maryann Plunkett), who had a nervous breakdown. Connie and Casey (Eilis Cahill), Connie’s sister, decide they don’t want to deal with her, and subsequently railroad Mel into checking into a psych ward. The story then becomes a generous hand off between Connie, Mel, and Casey, who takes a hands off approach with their mother.

The relationship is frayed to say the least between the three, but the exact nature is never made clear, only seen through actions that are the result of a lifetime of unknown ruptures. Connie’s relationship to her mom is best shown in her immediate response to the doctor asking, “what are the chances she’s faking it?” Similarly, Connie’s conversations with her sister are often just a pointed jumble of nasty four letter words.

All three women are facing different forms of loneliness. Connie has a content home life, but her work life has become a mess as one mistake has ballooned into the possibility of a lawsuit, and she’s clawing at anyone who manages to come close enough as a coping method. She’s a fountain of negativity. Casey is going through a sexual awakening, hosting an adult webcam, and hooking up with random townies in the hopes of making more than a fleeting connection. And all the while, she’s trying to figure out any way to make the future look any less like a blank slate.

Mel is struggling to feel herself again in the psych ward after a recent divorce and suicide attempt. Whether it’s applying makeup in front of a mirror with a frantic motion as a moment of self-reflection, or her begrudging conversations with a fellow patient in the psych ward, Mel’s loneliness isn’t shown, but seeps into the grooves of the movie, gradually spreading.

Casey and Connie’s dynamics are opposite, but their conflicts aren’t simply an oil and water situation. Rather, there’s a very real focus on things like the relativity of accomplishments between the sisters, but also the way language is encoded into personality. The two sisters speak in dramatically different ways that show differences in class as well as the social bubbles that they choose to enclose themselves in.

Connie treats her mother and sister with nearly sociopathic insensitivity, but she’s very recognizable nonetheless. She’s unflinchingly throwing bricks in glass houses, completely aware that her own destruction is near. But as the movie shows, that meanness is only confined to her interactions with her mother and her sister. As she says herself, she becomes a different person around them. Other movies may have stopped at Connie’s abrasion, and used that as a moment for redemption, but Putka is smarter than that, making her character someone aware of their flaws, but not fleeing to change. Through brief scenes like Connie putting her daughter to bed, it says everything it needs to say about her as a person. Family sometimes brings out the knives in people.

Similarly, the movie doesn’t take a magical view towards therapy. It recognizes its virtues, but there’s also acknowledgement that the administrators are just as often idiots as everyone else, as shown through a hilariously awkward flirting scene, and a therapy session where the counsellor has no idea how to proceed. If anything, it’s view might be just a bit too punitive and cynical in how facilities wield positivity as a weapon.

Written and directed by promising first-timer Robert G. Putka, Mad’s closest similarities in voice are to early Noah Baumbach, Mike White, and Jill Soloway. It’s not coincidental that all of those named creators have been accused of unlikable characters, and Mad is no exception. These are difficult to swallow characters who are at war with their impulses to be cruel, or to sink into roles of victimhood. And more importantly, the movie is smart enough to know that none of these characters should have arcs of grand redemption, instead opting for micro changes in viewpoint and perspective.

And even as the material has the opportunity to turn dour and maudlin, Putka has a real talent for funny dialogue that has a purpose in developing character. The dialogue finds all these little pinpricks of dark comedy whether it’s lines like, “In the analogy of the Titanic, we are the wealthy women and children, and you are everyone who drowns.”

Putka isn’t a flashy director, but he knows the power of watching someone transform on camera.  The three leading ladies are all consistently excellent, but the camera is especially enamored with Plunkett, whose face has the ability to communicate everything about her interior life.

Mad had the possibility to be another tedious movie about a family that’s falling apart, but it doesn’t make excuses for its characters or their flaws. This isn’t a feel-good movie about the way family makes everything better. It’s sharp-edged in its humor, and emotional in its understanding of personal histories. And it’s all the better for it, showing that the best movies about the subject of mental illness don’t wave away the consequences, they run headfirst into them.