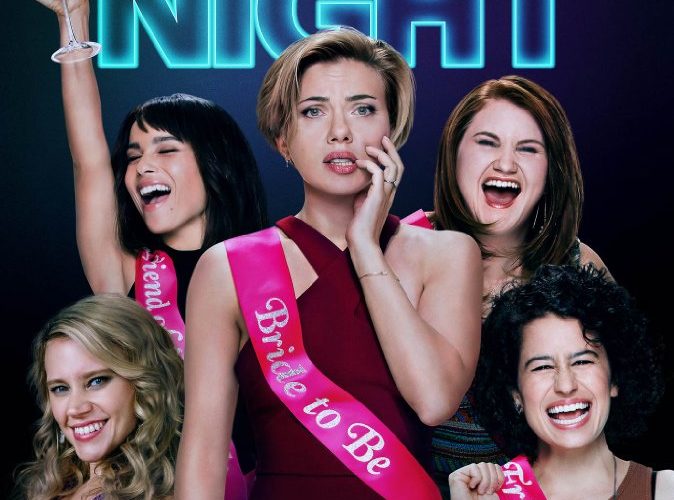 With a title that most studio comedies set over a single evening could adopt, Rough Night riffs on Very Bad Things, Bridesmaids, The Hangover — and even some Jawbreaker and Weekend at Bernie’s, for good measure — as murder and farce coalesce at a bachelorette party. It’s the sort of premise one hopes will wring out a bit of tension and a good deal of laughs as its talented ensemble walk a high-wire act of crime. While Lucia Aniello (one of many from Broad City involved here) brings a certain energy in her directorial debut and the cast do comedically click, Rough Night too often feels watered-down with a blatant disregard for basic logic, resulting in a comedy that’s ultimately more exasperating than clever.

Though they rarely reunite since their party-hard halcyon days of college, Jess (Scarlett Johansson), Alice (Jillian Bell), Frankie (Ilana Glazer), and Blair (Zoë Kravitz) are finally getting back together ten years later. Jess, who is now at the center of a political campaign running for office, is getting married to Peter (Paul W. Downs, also a co-writer), so Alice has planned a weekend full of bachelorette-related hijinks in Miami. When a stripper from Craigslist comes to entertain the coked-up group, Alice gets a little overzealous and jumps on him, resulting in his skull hitting the floor and an immediate death. Over the next few hours, the women dig themselves deeper and deeper into a hole in an attempt to cover up their accident.

The dramatic tension of most films set over a single night rests in what’s been bubbling under the surface for years prior. Rough Night is no different: Jess has invited Pippa (Kate McKinnon), a friend she met while studying abroad in Australia and with whom she’s maintained a better relationship than Alice. McKinnon’s absurd giddiness is a constant here, even if her biggest joke is how much fun she’s having embracing an Australian accent. (At least they get the Vegemite joke out of the way early.) Alice begins to learn just how much she’s been missing in Jess’ life, but doesn’t hold back alongside Pippa; the two stand out as comedic highlights. Meanwhile, Frankie has been living the no-frills life of an activist, and having previously dated the one-percenter Blair, who is going through a separation, some sparks begin to return.

While most laughs are mined from the chemistry of this ensemble, Johansson is clearly the lead and able to let loose; the sight of her simply snorting coke is a liberating one after years of Disney tentpoles and sci-fi extravaganzas. One of the more amusing (if easy) jokes is that while the women juggle the aftermath of a dead stripper, the men (also including Bo Burnham, Eric Andre, and Hasan Minhaj) are having their bachelor party: a serene evening of wine-tasting. Of course, things gets needlessly overcomplicated when Peter rushes to visit Jess, including a wholly unnecessary and passé series of jokes involving oral sex at a gas station.

In a comedy of this kind, once the unintentional murder occurs fairly early on, it’s a feat to be able to maintain that shock value while still providing laughs; unfortunately, Aniello and Downs’ script doesn’t subvert these tropes well enough. As the group moves this body around in attempt cover things up, there’s a rationality missing to their decisions, so any tension evaporates alongside the humor. Once some more serious plot machinations kick in, the derivativeness becomes more apparent as we simply wait for the inevitable conclusion. Add in a cookie-cutter score from Dominic Lewis, which seems like one of many studio notes passed down, and Rough Night loses the edge its ensemble is clearly game to provide had they better material with which to work.

Compared to the energy- and laugh-free “comedy” of the most recent offering in the genre this summer, Baywatch, there’s a momentum to Rough Night that is pleasing enough, but the bar should be set higher, and this cliché-filled outing never quite clears it.