Rotterdam Review: ‘Take Me Somewhere Nice’ is a Timeless, Engrossing Tale of Belonging 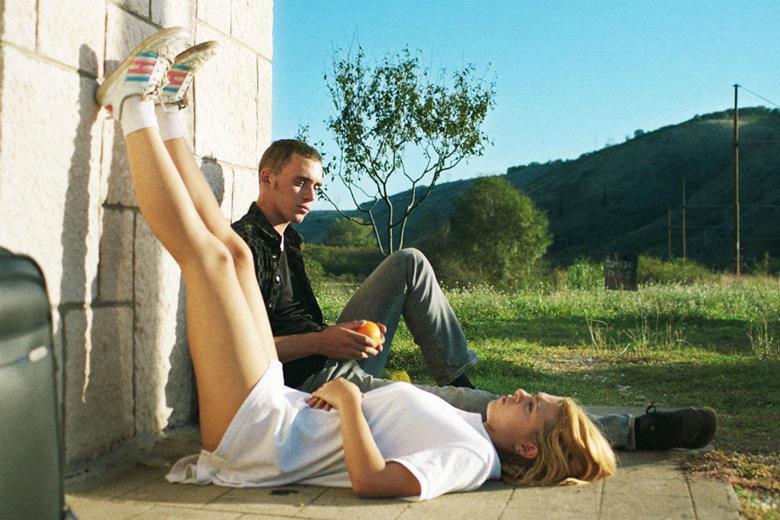 Standing tiny before a vaguely impressed crowd, fake snowflakes pouring down a semi-deserted hotel hall a few meters away from a stretch of the Bosnian coastline, a magician seeks a volunteer for the obligatory sawing a body in half trick. Begrudgingly, an insouciant look that belies an endless and soul-crushing journey behind her, Alma (Sara Luna Zorić) lends her teenage self to the experiment. The box is sealed; the magician taps around it; and a blade slices the silence with a metallic clang. Alma’s body is chopped in half, and the room erupts in an applause.

With its limbs protruding into the frame from unseen bodies — hands, feet, fingers sticking out as severed roots — Ena Sendijarević’s gorgeous debut feature Take Me Somewhere Nice is a tale of fractured identities, a Bildungsroman that zeroes in on a teenage girl traversing two irreconcilable worlds, each demanding her undivided allegiance, none close enough to be called home. The sojourn at the seaside resort is only the last chapter in Bosnian-born, Dutch-raised Alma’s journey — a picaresque road trip across her native turf in search for her ill and estranged father, who fled Bosnia during the war to start anew in the Netherlands with wife and daughter, but succumbed to nostalgia and abandoned both to go back. Whether or not nostalgia (pronounced with a smirk by the few eccentrics Alma stumbles upon along the way like it’s some sort of suicidal syndrome) is the engine that set the girl’s trip in motion, Sendijarević’s script leaves perceptively ambiguous.

Shipped away from the pristine, Jacques Tati-esque world of perfectly chiseled hedges and snooping neighbors of Dutch suburbia, the teen lands in Bosnia with a confused, what-am-I-doing-here look that echoes Everything is Illuminated’s Elijah Wood. “I hate the Netherlands: cold weather and cold people” she tells the two boys chaperoning her along the trip — her taciturn cousin Emir (Ernad Prnjavorac) and his intern-cum-best-friend Denis (Lazar Dragojević). But hatred toward the adoptive country doesn’t imply a zero-sum-game love for her native motherland.

Take Me Somewhere Nice is not a comeback story. Alma does not — at least not in any simplistic sense of the term — return to Bosnia, for that would imply a degree of proximity with a country whose language she’s about to forget, and whose memories have long slipped past her. And if I’m steering clear of misusing the word “home it’s because I fear the Alma who Zorić embodies with a rollicking no-nonsense swagger would cringe at the thought of it been associated to a place that belittles her as a spoiled pariah, much like the country she escaped to must have treated her as “another foreign loser” — a history of racism she obliquely alludes to in a ferocious slur she darts at Denis, as tensions over her overprivileged status surface, leaving the trio on the verge of collapse.

Pitted against two discursive spaces that treat her as an outcast, Alma does not have a home to return to nor a clear-cut identity to embrace, and Sendijarević (Bosnian-born and Dutch-raised herself) imbues her struggle with the empathy for a dilemma that rings achingly personal. Take Me Somewhere Nice is a film of misunderstandings, evasive answers, lost-in-translation moments, lands imagined and cursed. Myrte Beltman’s production design doesn’t just cast a mood, it conjures a mode of being, plunging Alma in a world of unadorned interiors, worn-out sofas, and pastel-colored wallpapers — a cosmos so specific and rich in details the stagnant smell of closed rooms and dusty furniture becomes a near-tangible presence. In turn, Emo Weemhoff’s cinematography accentuates the mise-en-scène’s dehumanizing character with a 4:3 ratio where the trio is often reduced to Lilliputian figures locked in vast and empty spaces. Halfway through the trip, Denis flirts with a group of German tourists; as they walk past him, unresponsive to the courting, he turns to Emir, waxing lyrically about a place he’s never seen: “imagine us, barbecuing in a backyard in Frankfurt…”

“Europe is best remembered by those who’ve never been there,” the eponymous Paraguay-stranded colonial officer of Lucrecia Martel’s Zama had been warned by a Spanish national, and I wonder if the lesson holds true for Denis, too. Lazar Dragojević’s piercing blue-eyed scoundrel may steal each scene with seamless bravado, but it is the quiet, aloof Ernad Prnjavorac’s Emir who teaches Alma the difference between a nationalist and a patriot (siding with the latter, “which is based on love,” and rejecting the former, “based on hatred”). And while Sendijarević may favor Alma’s point-of-view over the boys’ — thus departing from its inspiration, Jim Jarmusch’s 1984 classic Stranger Than Paradise  — nowhere are Denis and Emir treated as second-class citizens. All the empathy Sendijarević funnels into Alma reverberates with the same unbridled affection in her two guides. Poking fun at those who left and those who couldn’t, Take Me Somewhere Nice conjures up a love letter to a restless generation mired in a frustrated quest for belonging — one that stretches far beyond the country and time it’s set in, and reads as an engrossing, bittersweet memoir.