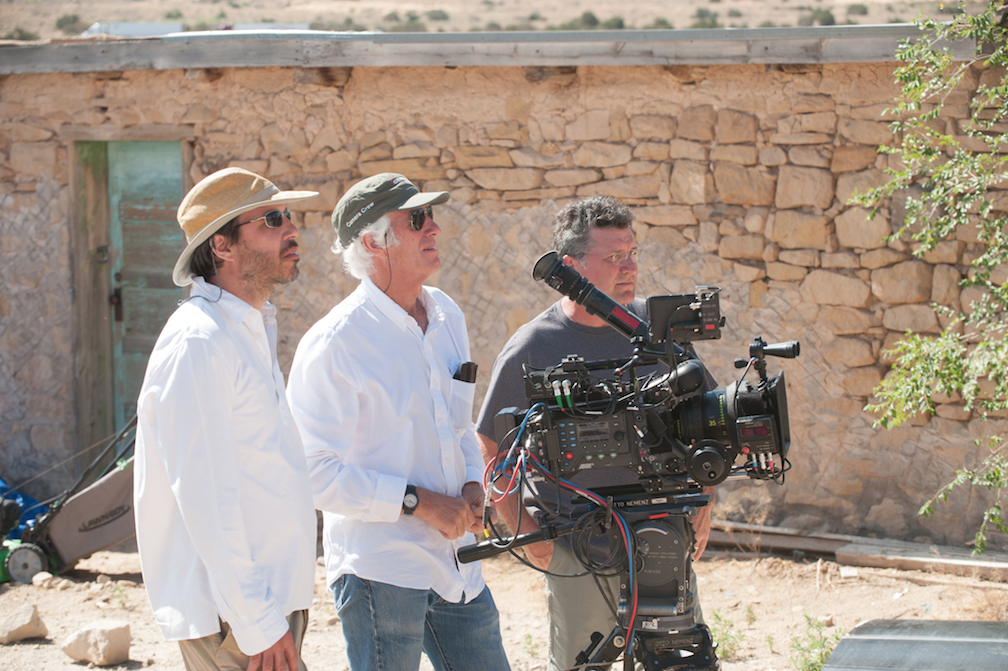 There are few — if any — cinematographers in Hollywood that create images as memorable as the ones Roger Deakins consistently produces. A longtime collaborator with the Coen brothers, as well as photographing such films as The Assassination of Jesse James by the Coward Robert Ford, Skyfall, and Kundun, he’s now found a new fruitful partnership with director Denis Villeneuve. After working on Prisoners — and before Blade Runner 2 — they’ve re-teamed for Sicario.

I got the chance to speak with Deakins this week about his latest feature, which is now in limited release and expands wide on October 2nd. We discussed conveying certain themes via the cinematography, his biggest inspiration, Villeneuve’s strengths on set and in the editing room, conveying tension without action, Enemy, his thoughts on a Sicario sequel, and much more. Check out the full conversation below.

The Film Stage: The film pretty much opens in broad daylight and then gets darker and darker as it proceeds. There’s almost a cross-over to complete darkness in that beautiful shot with the soldiers before they enter the tunnel. Can you talk about that gradual transition from light to darkness, if that was discussed?

Roger Deakins: Ah, I can’t remember. It was definitely in the script as such. Yeah, I would say that Taylor [Sheridan] builds into it, whether consciously or not. [Laughs]

You seem to shoot the characters in that way. Josh Brolin has a more comedic character and he’s often shot in bright lighting while Benicio del Toro’s character seems to be in the shadows.

Yeah, Benicio is at certain points, particularly the end scene in the kitchen. He’s not always in the dark, but yes, he’s more mysterious. He’s in the car, he’s usually darker than Emily [Blunt] is, for instance. Basically, the film is playing from Kate’s [Emily Blunt] point of view until the aftermath of the operation in the tunnel when it becomes Alejandro’s [Benicio del Toro] point of view. Yeah.

I was reading your forum — which is a great resource — and there was a comment a few weeks ago where this film was potentially going to be shot in all handheld. It seems just as visceral with this composed framing, but can you talk about those early discussions?

Yeah, it’s funny because we had a very similar discussion when I first worked with Denis on Prisoners. We talked about the look of the film and how naturalistic we wanted to make it and whether handheld added a certain sort immediacy and pseudo-reality to the piece, but somehow neither of us felt it was right. I’ve shot a couple of films totally handheld, but neither Prisoners nor Sicario felt like that was it. Then as we discussed it, I’ve mentioned the films of Jean-Pierre Melville, who I really love. He didn’t use handheld cameras and his films still feel very real. I thought there was a parallel with some of his films with Sicario.

Yeah, certainly. I was going to ask about that specifically. Denis said when he was editing he didn’t want to use temp music. He wanted to eek out the most tension just through the images first and foremost.

With your shots, you can tell if you are getting the maximum amount of tension out of each shot, but do you have discussions on set about editing? Or are you more focused on a shot-by-shot basis trying to get the most tension out of a certain set-up?

Yeah, we’re aware of it and we talk about it sometimes. We talk about how long you’re going to hold a shot and I don’t know if we specifically talked about the tension in that shot where they get out of the SUV before they go into the tunnel and all those soldiers and Emily and that are disappearing in to the darkness. I don’t think we had that conversation on set, but you obviously hold that shot until the characters have disappeared. I think one of Denis’ many strengths in editing is that he held a shot like that after everybody disappeared. So it just became a shot of twilight and everybody had gone and somehow that really increased the tension. It ratcheted up the tension.

I mean, we were certainly looking for shots that told the story without a lot of cutting. Again, going back to Jean-Pierre Melville. His action scenes were not really action scenes in the sense of a modern film where you cover a scene from a lot of objective angles and cut it together very fast. That’s kind of a device, really. I think the way, for instance, Denis had portrayed the action both in this film and in Prisoners was much more realistic in the sense that things happen very brutally fast — not always on screen, but when it happens, it’s there and gone. It’s like you’re left wondering, “Oh my God, what just happened? Did I see it? Did I miss it,” you know?

That’s so much more real than an extended sort of cutting of a piece of action.

Certainly, that’s great. Expanding on that a bit, there’s a shot after the border patrol shoot-out where they are returning to base and it’s Emily Blunt’s and Josh Brolin’s characters and they have a heated conversation.

As an audience member, you’re expecting to go in on a close-up, but I love how you keep it as a wide shot. Can you talk about that decision and not giving into expectations?

Well, you should ask Denis, but I did think that was a decision on set. We worked out those two shots of the convoy coming back to base. The two matching shots: there’s a tracking shot and then the next shot is the one where you’re talking about, where they kind of come right up to the camera and stop. We shot that shot and just played out the action and as far as I remember that dialogue of Josh and Emily just kind of happened in the frame as we let the shot run. So I suppose in a way it was as much a rehearsal as anything, but Denis just said, “Well, that works great. We don’t need to cover it.” Because I said, “Do we want to cover it? What should we do?” He said, “No, I don’t want to cover it. Why waste the time? We’ve got other things to do and I think that works really well.” So I think he’s really great at just making those on-the-spot decisions. I don’t think he had thought that prior to us shooting the scene. It was just something that he felt when he saw it, he knew it worked.

I also wanted to talk briefly about The Assassination of Jesse James by the Coward Robert Ford. It’s one of my favorite films and I actually helped spearhead the revival to help bring a screening to New York City a few years ago.

When Andrew Dominik came here a few years ago, he talked about working with you and he said you view “cinematography as a collection of images, not individual images.” In each of your movies, when I look back at them, they very feel like of a piece. Do you ever decide to take a shot out or decide not to do a shot because it looks too beautiful?

Yeah, you sort of self-answered yourself, really. [Laughs] It’s more in terms of camera moves than that. In Sicario, some of those skies that we got, we didn’t…. I don’t want to say we didn’t expect, because I supposed we should have, because we were there during the monsoon season they get in Sante Fe. We were talking about the film being colorful, but much more bland in terms of the sky. That’s just something you just kind of go with. We could have said, “No, we don’t want to shoot this. It’s too interesting,” but it actually added so much. The landscape wanted to be a character and that helped so much with it. What I really more react against is when I feel that I or we are doing a shot that is clever for its own sake, in a way.

It’s funny, when I was shooting Jarhead with Sam Mendes, we had talked about this film being very kind of close to the characters and always with one character’s point of view kind of thing. He wanted to really identify with the characters. We decided to shoot 99% of it handheld. Then every now again we were storyboarding or talking about something and one of us would suggest a crane shot or something.

And the other would always look and go, “Are you mad?” sort of thing. I think that happens a lot. Once you get a sense of the film, the rhythm of a film, yeah, it’s not about individual shots. It’s about sequences and it’s about the whole. And you don’t want something to stand out as being ostentatious or clever. You don’t want the audience looking at what the camera’s doing. You want the audience looking in the frame. You know?

That relates to lighting as well, everything.

I know you didn’t shoot Enemy, but did you see Enemy?

Yeah! It was great, wasn’t it? Beautifully shot. Yeah, I thought that was fabulous.

Yeah, it was fantastic. Something in Sicario reminded me of it: the transitions he uses in Enemy with the skyscapes and the wires in the city reminded me of the bird’s eye view transitions over the landscapes here. Did he talk about that at all? In both films, they are these foreboding transitional periods where you can breath a little, but it’s still extremely intense, the way they are shot.

Yeah, Denis talks about it. That’s why he wanted those landscape shots. That’s his — style is the wrong word — but that’s what he was after. That’s something he does to create tension and create a world as well.

You can see the plane’s shadow. Is that digitally manipulated?

Yeah, digitally. You could do it, but that was all shot out of a helicopter.

Lionsgate just revealed a Sicario sequel is in development.

Yeah, I kind of couldn’t believe it either. What is your take on it?

Oh, I have no idea. Well, we were in Toronto with Denis and the rest of them and I was asked that question and I had a kind of jokey conversation about it, but I thought, “Well, I know.” But now maybe it is serious. Somebody somewhere is serious about it, but I don’t know anything about that.

Ah, I was curious. My last question: this is a grounded story, but you bring a lot of aesthetic touches to it. How do you find that balance between realism and over-aestheticizing the image?

Yeah, well, I don’t know. I think it’s just who I am, really. My reaction to the scripts and also guidance from the director, but I think a lot of it comes from my experience shooting documentaries for years. That’s the kind of thing I gravitate to — that kind of sense of reality.

Well, thanks so much. I really liked the film and good luck on Blade Runner 2 and I can’t wait to see Hail, Caesar! as well.

Sicario is now in limited release and expands wide on October 2nd.