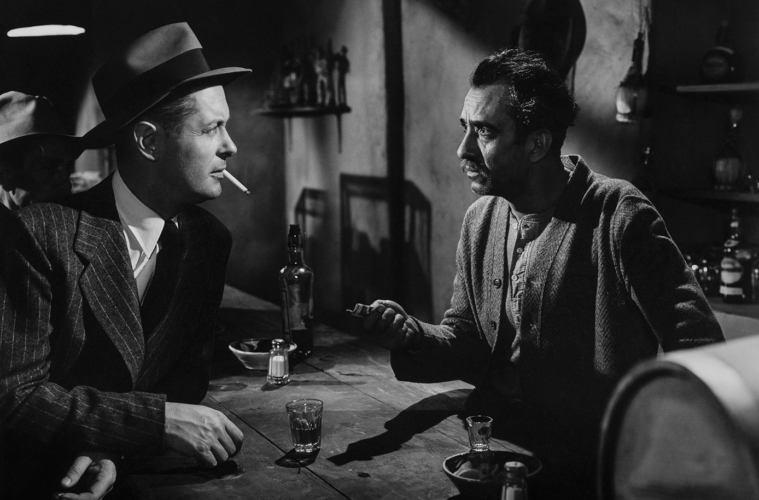 ‘Ride the Pink Horse’ Hits Criterion: Edges of the Frame

It’s often been said, and not without reason, that Double Indemnity is a perfect movie. Each line of dialogue in Raymond Chandler’s screenplay, the methodical camera placement of Billy Wilder’s direction, the lustful gazes of Fred MacMurray toward the illuminating skin of Barbara Stanwyck. All these choices form something of a machine: this film is going straight to the end of the line, baby, and nothing can stop it.

But perhaps perfection isn’t the best way to approach a medium. What happens to the oddballs, the discarded objects, the things that can’t quite come together? They’re not perfect, but, man, can they sometimes sizzle. When Andrew Sarris coined the influential category “Expressive Esoterica” in of The American Cinema, he wrote of the directors: “Their deeper virtues are often obscured by irritating idiosyncrasies on the surface, but they are generally redeemed by their seriousness and grace.” This is the world of Robert Montgomery’s categorically eccentric Ride the Pink Horse, a 1947 border noir now out on Blu-Ray from The Criterion Collection.

Montgomery has always remained on the outskirts of film history. He gave two deeply expressive performances in the wrongly ignored Hitchcock screwball Mr. & Mrs. Smith and Ford’s haunting war drama They Were Expendable. As a director, his name comes up for the not-particularly-great experiment Lady In the Lake, an entirely POV adaptation of the Chandler novel. Ride the Pink Horse, adapted from a book by Dorothy Hughes (author of In a Lonely Place), is a harder film to sum up.

Produced by Universal’s Joan Harrison—one of the rare female producers at the time, and a co-writer on a number of Hitchcock films—it’s a crime story set in New Mexico, with Montgomery tracking down a gangster who popped his friend and in want of money. But Lucky Gagin (oh, what a name!) is, frankly, a total idiot. His plot to bribe Hugo (Fred Clark) is incredibly convoluted, he can’t elude the seemingly harmless police officer on his case, and there isn’t a trap he doesn’t fall for. He spends a good half of the film with a bullet in his belly, a metaphor for film noir if there ever was one.

But the plot of the film speaks nothing to the way it all moves. One of Pink Horse’s opening scenes features an extended long take as Montgomery hides a key piece of evidence in a bus station, each track of dolly carefully laid out to catch his precise actions. He craftily sneaks into the room where his prey lies, but when only the butler is around, he unleashes a hell of violence. A jarring tonal jerk is made once again when Rita Conde enters as the femme fatale, and this film suddenly launches into a sexual tête-à-tête all before the entrance of Hugo. A portly man in the Sydney Greenstreet vein, nothing is odder than the hearing receiver he wears in his breast pocket. Like many of the details in Ride the Pink Horse, this has no bearing on the plot (unlike, say, the use of a similar receiver in Joseph H. Lewis’ The Big Combo), but simply sits as one of the details that pulls us toward the edges of the film, what we might often not notice.

Film noir — as a construct, a genre, a style, or, as I have proposed, a mode-like melodrama — is full of signifiers that never totally apply, especially considering the expanding canon. Imogen Smith, interviewed on the disc, has done much to help us reconsider the role of urban anxiety in film noir, and Ride the Pink Horse is a perfect example. The film is set in an amalgamated mix of New Mexico communities (here simply “San Pablo”), but most notably Santa Fe during the Pasatiempo, an anti-carnival carnival organized in the Bakhtinian spirit, highlighted by the burning of the giant marionette Zozobra. Dominique Brégent-Heald has critiqued the scopophilic gaze of native traditions, what gives Ride The Pink Horse its spark is this turn toward  the normal bounds of what we watch when we watch. It’s a picture about the margins — of America, of masculinity, of race — and thus defines itself by the constant turns. Despite its possible status as a postwar film, Ride the Pink Horse fits better as a timeless film, by which I mean, rather literally, time-less: its universe exists outside time. Nobody really has a past, and nobody really has a future. Everyone exists only in this moment.

Lucky Gagin drags his feet through the town, befriending a Mexican drunk who emotes like he’s performing Henry V, and falling for a Native American ingénue: Wanda Hendrix’s deeply emotive performance as Pila. She keeps him alive through her strive to see the man as something extraordinary, to believe in him, finally undercutting him by the ending. When, as their romance ends, she immediately turns to her friends and recounts the story that has just taken place. All he can do is look on in befuddlement while finally returning home. What was his existence becomes her myth. (Michael Almereyda, in the Criterion essay, connects this to the use of female voiceover in Terrence Malick’s Badlands and Days of Heaven.)

In 1963, Jacques Rivette wrote that, in Ride the Pink Horse, Montgomery wanted “to see the world indirectly or from the other side of the mirror. In order to see it as more true than the truth.” Montgomery’s film is simply a witness to a world of whiskey bars, carnivals, and territories rarely traversed — more about what we don’t see than what we do. He’s a foreigner in his own backyard, despite having just come home. And if Ride the Pink Horse isn’t perfect, it’s a testament for directing our eyes to things just beyond the frame, capturing something ephemeral and mummifying what was in the process.

Ride the Pink Horse is now available on The Criterion Collection.