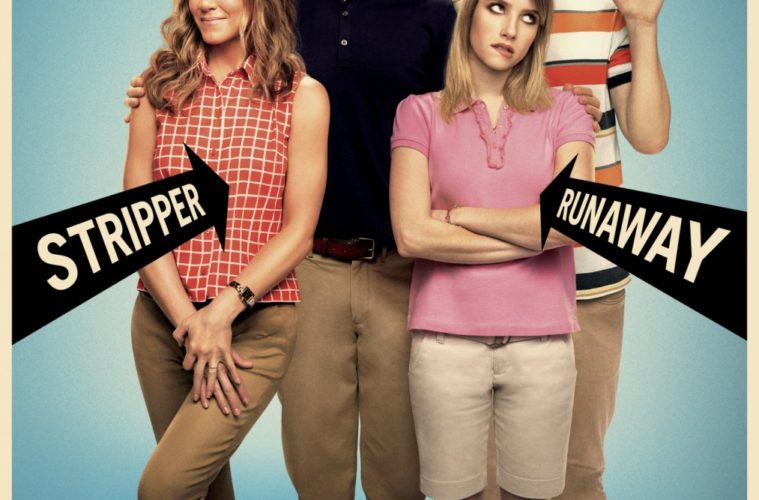 An R-rated comedy shouldn’t possess a PG-rated heart. This is We’re the Millers’ main problem because while the profanity-laced adventure has a ton of laughs, one can’t help shake the feeling that it’s targeted to a 13-16 age group who won’t be allowed to buy a ticket. Overt sexual innuendo and f-bombs don’t make up for a lack of anything else that would render screenwriting teams Bob Fisher and Steve Faber or Sean Anders and John Morris to need an R for the story to work. I actually wouldn’t be surprised to discover the former Wedding Crashers pair wrote it as a PG-13 with the latter two coming on board to “spice it up.” Well, the MPAA took notice, but anyone expecting a Bridesmaids/The Hangover caliber comedy will be sorely disappointed. I acknowledge this issue is detrimental solely on expectation, but I don’t think it should be discounted as a result. That R-rating means filmmakers have a pretty open field to work their magic—to give us something beyond the heartstring tug of selfish people finding compassion in their hearts and a yearning for family roots. We anticipate insanity where lower rated romps remain conservative, so it’s more than mildly disappointing when Emma Roberts and Jennifer Aniston taking turns making out with Will Poulter is the raciest thing you have going for you. Director Rawson Marshall Thurber had a huge success with Dodgeball: A True Underdog Story—a film I enjoy immensely—but while that excelled beyond his hands being tied by the ratings board, no one apparently told him he had carte blanche here.

I’m sounding superficial right now—I know—but I honestly can’t get past the fact that Warner Bros. allowed this project to lose such a huge movie-going audience with zero nudity (this is misleading, but the lazy gag refuting the claim is hardly worth the trouble), death, or even blood worth mentioning. A guy gets smacked in the face with a wrench and it actually makes him less ugly. I’m sorry, but there is something to be said about constantly getting letdown when the payoff of every joke finds a way to turn wholesome whenever the raunch attempts to peek through. Couple that with the wasted inclusion of funnymen Thomas Lennon, Luis Guzmán, and Ken Marino and you can’t help but scratch your head at how it all went so wrong. The plot isn’t a bad way to get its disparate leads in the same RV either—it just tries too hard to pretend they’re more dysfunctional than they are. David Clark’s (Jason Sudeikis) plan to smuggle marijuana from Mexico is inspired (and a huge potshot at the US Customs and Border Protection). If he shaves, acquires a middle-aged Dad haircut, and buys a couple acquaintances to pretend to be his family, no one would look twice as he drove two metric tons of narcotics into the land of liberty. He’d be off the hook for owing supplier Brad Gurdlinger (Ed Helms) forty grand and would earn a nice payday too. It’s the type of idea hatched when your back is against the wall and Sudeikis pulls it off nicely with smug sarcasm replacing the usual fear.

Rounding out his merry band is stripper Rose (Aniston); runaway, quasi-goth chick Casey (Roberts); and wide-eyed innocent Kenny (Poulter). While they’re all playing stereotypes, I’ll admit my surprise in finding that each instilled a sense of authenticity too. I expected them all to feel fabricated—mere pawns to the plot—and they proved me wrong. Rather than let its audience accept these character tropes implicitly like the intelligent-minded viewers they are, however, We’re the Millers detours from the main drug plot so it can continuously bash us over the head with how sweetly imbalanced their collective is. Wouldn’t it be great if “Mom” and “Dad” found themselves actually caring for their fake children? Yeah, maybe in a made-for-TV film about family being what you make it and not who makes you. Not here, though. No, the end result ends up being a series of misguided gags strung together by contrived subplots that eventually prove crucial to everyone’s salvation. Tomer Sisley and Matthew Willig are nothing more than cardboard cutout villains hot on their trail for the pot; the Fitzgeralds (Nick Offerman, Kathryn Hahn, and Molly C. Quinn) overstay their welcome once their in the mirror opposites of pure family values unearths an awkward wild streak; and Helms’ sight gags with various hobbies of wealth fall flat as he checks in with David over the phone. In fact, the only supporting actor worth mentioning is Mark L. Young as hip-hop carnie Scottie P. His subtle giggle after saying, “Know what I’m saying?” is a treat and his outtakes during the credits a highlight.

It’s a shame the central quartet consists of the only fully fleshed-out characters in the film because they do have great chemistry together. Sudeikis is a likeable dick, Aniston an expert at channeling her homemaker relatives, and Roberts effective at toeing the line of emo brat desperately in need of the caring discipline love provides. Poulter is far and away the best part, though, as his childlike naivety never falters. He’s always the butt of the jokes and somehow finds a way to appear as though he is the one telling them, fully aware of the situation and sacrificing his own safety for the laugh. He’s the shining star inside a film chock full of window dressing with too few “real” moments. The premise earns its chuckles—it’s the orchestration that lacks impact and the promise an R-rating brings.