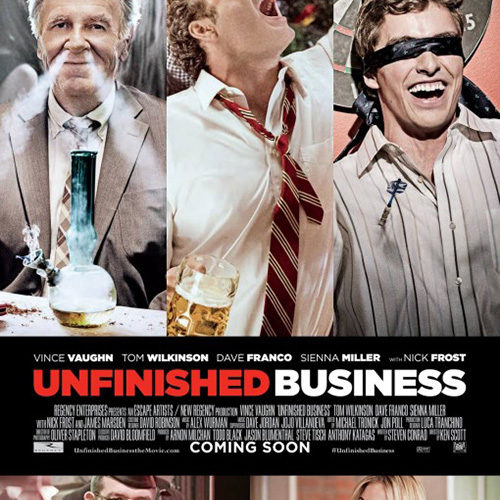 With more substance than a run-of-the-mill Todd Phillips comedy, Unfinished Business pairs a team that knows the territory of fatherhood well: writer Steven Conrad (The Weather Man, The Pursuit of Happyness) and director Ken Scott (Starbuck and its Vince Vaughn-fronted American remake Delivery Man). While not without big laughs, Unfinished Business never quite connects; it’s just shy of the finish line, despite some very funny surprises along the way.

Reteaming with Scott, Vaughn plays Dan Trunkman, an everyman who struggles with his role as a father. His son Paul (Britton Sear) is a chubby outcast while his daughter Bess (Ella Anderson) also faces a series of challenges, most of which are family-related. Traveling throughout the year, the family is held together by his wife Susan (June Diane Raphael), who frequently consults Dan via Facetime (and when the going gets rough, he freezes in place to fake a connection glitch).

After a fall-out with his boss Chuck (played by Sienna Miller), Dan has a Jerry Maguire moment, pulling in two team members, none of which he’ll become bro-mantically involved with. Perhaps this is where the story misses some warmth: it’s less a bromance and strictly business. Working out of a donut shop with wi-fi, Dan hustles to close deals while the elder statesman of the operation Timothy (Tom Wilkinson) fudges the numbers. Working the venders is Mike Pancake (Dave Franco), a special needs kid who has recently quit his job at Foot Locker because he didn’t like to look at feet. This is Mike’s first rodeo, an international business trip that will take the gang from Portland, Maine to Berlin, Germany, in an attempt to shake hands on a deal with Jim (James Marsden) and his potential man servant Bill (Nick Frost).

Landing in Berlin in the worst possible circumstances, amongst the G8, Berlin Marathon, Oktoberfest and Folsom – a gay fetish fest – the gang has trouble finding a hotel. One set-up with an effective pay off is Dan’s unfortunate hotel room. He’s unwittingly signed on to stay in an “inhabitable work of art,” getting a nice room in an art installation at a bargain basement price. He becomes a viral sensation as “American Businessman 42″ as he captivates Berlin art goers. Timothy and Mike stay at a youth hostel and it results in very little comedy.

While Unfinished Business has some effective raunchy moments, including a run-in with Bill at Folsom, its pay-offs are never quite big enough. While I admire Scott’s restraint and his dedication to taking this material seriously (with a strong focus on Dan as a character), he perhaps is too much of an everyman. The observations and family dynamic seems too bland even if it’s heartfelt. Conrad’s script effectively separates Dan’s working life and business life despite the impact its having on both of them — he remains all about the business even if for the rest of his team, this trip is more or less about self-discovery. The arcs are perhaps not as crystal clear or as profound as they should be, despite the fact it might have been there in a previous draft of the screenplay.

Unfinished Business tries to have it both ways, which I certainly admire. I’m not a fan of comedies where character development takes a backseat to the jokes. Somewhat uneven, certain sections are worth some admiration, but the sum doesn’t quite equal an interesting enough whole. Failing to reach the kind of giddy, sensory overload Cedar Rapids contains, despite having a larger, international canvas, Unfinished Business makes for a mediocre trip.