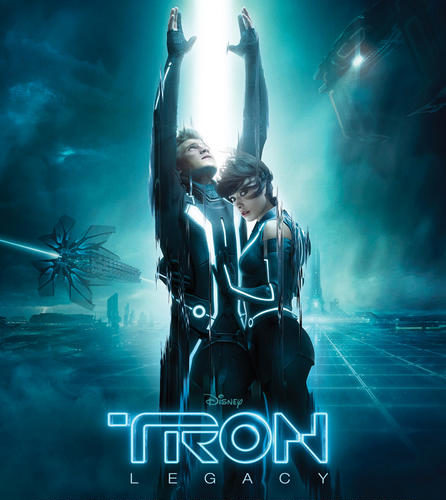 Having very little attachment to the original Tron, I was expecting middling results going into architect-turned-director Joseph Kosinski‘s Tron: Legacy. Give me some enticing action, a serviceable plot and characters that are more than just robots and I’ll be satisfied. After going through The Grid and back, Disney’s massive blockbuster only managed to partially deliver that satisfaction. The rest is a callously incoherent mess.

We start strong, with a gleefully Tron-ized Walt Disney opening animation, then move into a sweeping cityscape reminiscent of photography by fellow architecture-obsessed filmmaker Christopher Nolan. It sets the tone for the expansive scope, or rather, the bags of money Disney has poured into this production. Centering in on a 1982 Sam Flynn, we get our first glimpse at young CG’ed Jeff Bridges saying his long goodbye before jumping to the present.

Our lead, a giddy Garret Hedlund, prepares a single-man heist on his empire ENCOM, who are launching their new OS; in the middle of the night for maximum awareness, of course. The sloppily constructed scene begins with TV sets out of nowhere, spewing information to catch up the non-Tron fans. Hedlund then shows off his “cool” factor, foreshadowing the most discernible trait to follow.

Riding in on his slick Ducati motorcycle, he breaks into ENCOM by hacking the security door resulting in a snarky comment; another foreshadow of the many to come. We then crosscut between drab corporate speak that nearly redeems itself with a failed comment on open file-sharing. Sam’s prank sparks the discussion by making the new Encom OS freely available thanks to his prank. The problem is we all just want to get inside The Grid. I’m all for patience, but at least make the build-up interesting. This 20-minute introduction has very little bearing on what we are about to see, and the weak surprise cameo comes off as nothing more than clumsy writing collided with stunt casting.

After a quick parachute drop, cop evasion, a page, some surrogate father talk and a trip to Flynn’s Arcade, we have finally arrived inside The Grid. 2D switches to 3D and, for a gimmick, the sensation works surprisingly well. The warm, vibrant discovery found in last year’s similarly positioned Avatar is not here though. Kosinski has crafted a cold, calculated world of LEDs, slick surfaces and deadly serious occupants. Initially appealing, the consistent dreariness can wear on you as we approach over two hours looking at slightly different glossy designs. But before that kicks in, we are treated to the best action scenes of the film.

A bewildered Sam gets thrown into the virtual ring for a disc battle, our first look at mayhem in the grid. With discs flying directly at us, the IMAX 3D works great. I was physically moving my head to avoid them. As he moves on from opponent to opponent, we get our first look at a mysteriously-shrouded CLU, gazing from above. Kosinski doesn’t take long to throw us into the main event. The most impressive action of the film delivers, as five-on-five light cycle clash across multiple levels and increasingly ramped-up collisions. Then it all goes downhill, fast.

For a brief moment there is still hope. Quorra, played with discernible life by Olivia Wilde, breathes energy into her scenes, but it all starts to get muddled quickly. Sam reunites with his dad, portrayed with maximum hippie prowess by Jeff Bridges. There are odd dinner table exchanges and metaphysical discussions amounting to very little. Nothing feels connected and when the father/son relationship comes to a laughable, ineffective peak later in the film we are left wondering why screenwriters Edward Kitsis and Adam Horowitz did such a poor job with the building blocks here.

It’s not simply the relationships that come across stagnant, the characters themselves are idle apparatuses. Where is our motivated hero with personality? Contrary to many earlier rumors, Hedlund is not the problem here. It’s the material provided that dismantles his performance and turns him into a vending machine of one-liners. As this realization grows with each new piece of dialogue, we start to learn the objective for the rest of the film. Daddy Flynn’s disc holds the information of The Grid and it must be protected. The team of Quorra, Sam, and Kevin make it their mission to enter CLU territory and get back to the real world before time runs out.

On this journey, that lacks a vivid sense of actual traversing, we find ourselves in the End of the Line club for a brief moment of absurdity. Michael Sheen as the deliriously ridiculous Castor is found chewing up his scenery to no end. He is joined by the true stars of the film: Daft Punk. Their score is, without a doubt, the most redeeming element of the film. Every time you are waiting for each expository scene to end, you hear their cue kick in and and it feels like a bolt of electricity single-handedly re-energizing the film.

The rest of the film is inanely cluttered, with zero stakes and deficient logistics. CLU is building an army of minions called ISOs to wreak havoc in the real world, but considering the complete lack of connection with actual real-life computers, it is a sparse concept. They are supposed to “change religion” and all sorts of other things but our screenwriters never actually explain how/why/what would happen if CLU succeeds. Add in one last action scene that doesn’t live up to the earlier Grid battles and you are just wishing for this drab journey to come to the end of its drawn-out conclusion.

All of these painful shortcomings are too substantial to forgive. Disney had seemingly unlimited resources to create the best result available, and they failed. We are given a wholly vapid blockbuster that only serves to perpetuate the negative big-budget studio mentality of dazzle over substance. At its best, Tron: Legacy is a competent 2-hour ad for Daft Punk, but that would be giving the film too much credit, as this French duo are able to craft more compelling music videos on their own.